I headed back to Skyline Drive in the morning. The plan was to ride down part way then get off and start heading towards Raleigh, NC. Skyline was packed this morning and was excruciatingly slow moving. After 3 hours I had only ridden 80 miles so I got off and started to hit back roads. There were a few nice 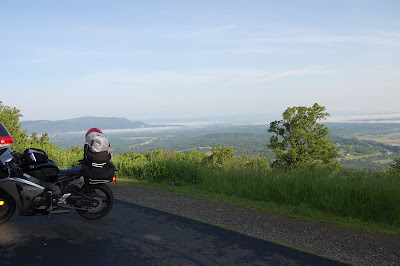 twisty roads, but most of them were fairly boring and went through a lot of small towns. I got bored after a while and just starting picking random back roads through Virginia. I came upon Farmville, VA and had to take a picture of the main sign just for the Facebookers who were obsessed with that game. There is a a real Farmville, and it was actually fairly nice. Downtown Historical was pretty neat, all red brick buildings that looked like they were kept up really well. 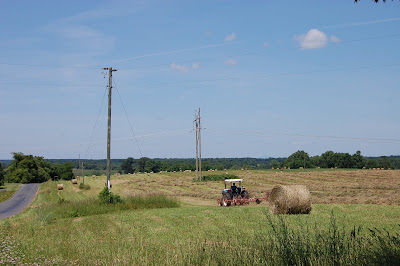 Some of the random backroads I chose were great, rolling hillsides, green scenery new pavement. But some were really bad, narrow lanes, bumpy, gravel ridden and made for some slow going. I bet the people I saw were surprised to see a modern sportbike riding through their neighborhood.

I reached Raleigh around 4pm and went to my old place to see the old roommates. I was greeted by Derek with a awesome authentic Palestinian lunch of malfoof, basically seasoned rice wrapped in cabbage. It hit the spot, I inhaled the whole plate in a matter of seconds. We spent the rest of the day hanging out, playing video games and catching up. then later that night, the other two roommates came back and after some bro hugs all around we laughed the night away. I move around so much I have lived with a lot of people. These guys, Derek, Jamal and Ryan were some of the best roommates I've had. I've missed the hell out of these guys. 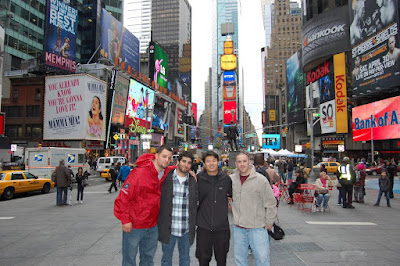 Originally I planned to leave Raleigh around 9 am. But after a late night, (the new roommate that replaced me had some friends spend the night also they had a a lot of drama going on and kept us all up till 3 or 4 am) I started the bike up at 10am and was strapping on the helmet when Derek came outside. "I'm glad I caught you before you left," he said. "How about a cup of coffee?"
Alright, one cup. thats it. An hour later, I was finally on the way, haha. This is going to be a late night. I left Raleigh on back roads with my GPS saying I would arrive home at 8pm. Not too bad, but I decided to jump on the interstate for a little while to catch up some time. Around the Charlotte area, I decided I couldn't take it anymore so I got off and started on backroads again. I rode by the Charlotte Motor Speedway and there must have been a NASCAR race that weekend because the beer and mullets were flowing freely.
South Carolina, not much to see the way I took. A lot of flat straight open roads. There were some nice lakes and bridges but thats about it. One of the roads I took had a bad accident so I ended up having to take a long detour around it which led me to a fairly decent road that led me into Georgia. 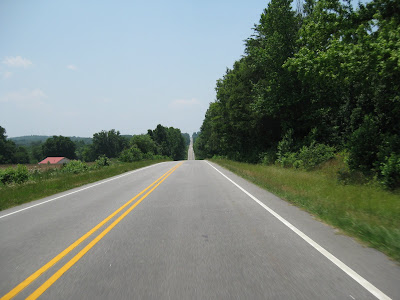 Getting close to home, I was tired and ready to put my feet up. About an hour and a half from home, the skies looked dark and stormy. There was not a place to pull off, just open road and no shoulders so I kept moving. A few miles into the clouds, i started to get what felt like 30 mph crosswinds. It was impossible to keep the bike going in a straight line. While struggling to keep the bars pointed in the right direction, the downpour hit out of nowhere. Fifteen miles or so later, I came up on a small town and pulled off into the gas station. The rain had stopped now but a dark cloud was moving towards me at a quick pace. I gassed up and pushed the bike out of the way and started to put the rain covers on the bags. As I was finishing up the last bag, the rain and wind came. I had difficulty putting the last cover on because it kept getting blown out of my hand. Finally, I had everyone covered up as well as I could and I started to put on my own rain gear. Im already wet at this point but the rain suit would help keep me warm at least. When I took my jacket and chest protector off, I started to get pelted with hail. What the hell.
Forget it, I'm not riding in this. I ran inside the gas station to wait out the storm. This was one hell of a storm. The bike looked like it was going to be blown over on its kickstand so I ran into the hail and moved the bike to the other side of the building which shielded it from a lot of the wind and hail. It was sad to watch Jess get beaten up by the wind and hail while I stood inside and watched. 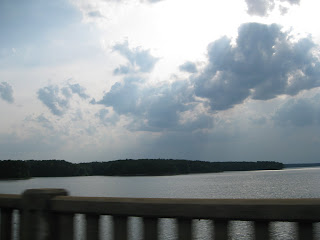 After hanging out inside for an hour, the storm died down so I called my friend Matt in Macon to see what the radar looked like. My phone had zero service in that area so the gas station attendant let me borrow her phone. It turns out the storm totally missed Macon so I could start heading back, no cheap hotel for me tonight. I thanked the gas station attendant and headed out. It was getting dark now the roads were wet and it was still raining. No fun. I was expecting deer to pop out at any moment. Getting so close to home, I was anxious to be back. The wind was picking up again and the rain started to come down harder. I could see bright flashes of lightning in the direction I was heading. Crap, I really dont want to ride through this storm. From here to my house, there were no places to stop and hide from the storm.

About 20 miles from home, the wind and rain died a bit but I was seeing more and more flashes of lightning. I made one of the last turns and as I was looking through the corner, a deer jumped out from my right side. I straightened the bike up and hit the binders. The deer passed in front of me by only a matter of a foot. Whew, too close. They say accidents happen close to home, they, whoever they are, weren't kidding. At this point, Im telling myself, slow down, relax, slow down, relax..... Its dark, Im wet, the impending storm is taking away my concentration. I needed to get off the bike, I was so close.

The last road going to my parents house from this direction is a 2.5 miles dirt and gravel stretch. The road was like a washboard, shaking my teeth and bags apart. It was still only damp so it wasn't too slick, I was losing traction a lot but it could have been worse. It probably wasnt a good idea to be moving at 45 mph on it either, but it would be a lot worse if the sky fell while I was one this road. This road turns into a huge mud pit at any sign of rain. Just a couple hundred feet before the drive way to my parents house, a couple of cats ran across the road right in front of me, then a few feet later, a rabbit ran out. Are these animals serious?

I finally pulled up to the door to the basement where I keep my bike and exhausted, I peeled off my gear. Just a few minutes before, there was this huge anxious rush to get here before the shit hit the fan and now that Im here, no rain, no wind, just some lightning off in the distance. All of a sudden, it was peaceful.
Posted by Dazn at 10:34 AM