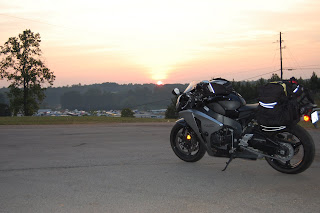 After a long hot day at the racetrack it is fairly easy to get a good nights rest. I stayed with my friend Brandon in Cumming last night since I couldn’t camp at the track on Sunday nights after an event. We gorged ourselves on pizza and Newcastle at a local pizzeria then I proceeded to pass out on his couch as soon as my head hit the pillow. The alarm clock rang at 6am and I jumped right up feeling refreshed after about 7 hours of sleep. I quickly packed up my things and hit the road. It was chilly riding up GA 400 so I threw a fleece on under my jacket. Slowly making my way up to 411, I could see the damage the latest storm had caused to the trees and houses in the area. A reminder of the uncontrollable forces of nature that I hope not to run into. After a few hours of riding, I finally came upon the start of the Blue Ridge Parkway near Cherokee, Tennessee. I took a few pics and it was time to hit the road again. I have done bits and pieces of the BRP the past few years but have never ridden the entire parkway, so I made it the goal for the week to ride all the way up to Front Royal, VA where the Skyline Drive ends. I spent a year in Front Royal in 2006 working for a Formula BMW team so I still have a few friends in the area I plan on seeing. Our painter and truck driver are still in the area so it will be good to see Butch and Lou again. In the short time I was there, those two became like family to me. 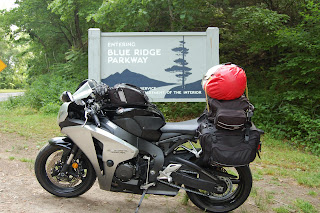 Riding up the BRP, its difficult not to stop at every overlook to take pictures and take in the Smoky Mountains. After a few hours, I realized I was making horrible time so I decided to just roll through most of them and keep moving. At every overlook there was always a few motorcyclists and I took the time to chat a little bit with each of them. Everyone had a similar story, ridden bits and pieces and wanted to do the whole parkway, sounds familiar. At one of the first overlooks, I met an older man on a 70s Honda that looked like it had a full life already. It was amazing to think that he trusted that old piece of machinery enough to take himself almost a thousand miles away from home, and here I am worried about my Honda built in 2008. He told me of a few nice places to stay and eat along the way and where to get a free map of the BRP. This would come in useful later on. Not wanting to kill too much time, I left the old man drinking his sugar free Red Bull and went about my way. About 20 miles later at the highest point on the BRP, I stopped to take a few pictures of the landmark and met a father and son duo on their Ducati Multistrada and Bandit 600. They had ridden down from Ohio and were almost all the way done with the parkway. They had been here last year and only got halfway through, so they made it a mission to finish the entire road and then they would take backroads all the way back to Ohio. I always envy the people who have family members willing to do such a trip. Unfortunately, Im the only person in my family with a two wheel obsession so most of my trips are done solo. Not that it’s a bad thing though, riding solo isn’t lonely by any means, it allows more freedom to stop when I want and where I want and go as far as I can push myself. I have a few friends with similar riding styles so when they are able to join me it is always a guaranteed good time. I always said that I would marry the first girl willing to do a long crazy ride with me and after almost finding that girl once, I decided that probably was not the best idea. I spent more time looking in my rear view watching to see if she made it out of the last corner with the rubber side down than actually enjoying my ride and keeping my pace. I don’t mind waiting for people, but when I am concerned for their safety, it’s a different kind of a waiting game to see if they appear around the corner. For now, I’ll do these trips solo. 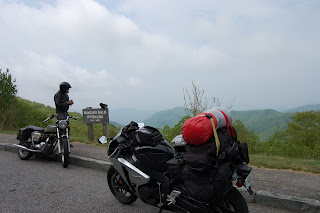 Around 2 pm, my butt started feeling the effects of riding a sport bike for 7 hours straight, I sat down at a picnic bench at an overlook and had a snack and just rested for a while. Realizing how far away destination for the night was, I had to kick it into high gear and keep moving. I was averaging just over 50 miles per gallon so I only had two fuel stops after getting on the parkway. This is probably the best mileage the Honda has ever seen. I was planning on stopping at the Doughton campground but I found out from the father son duo that part of the BRP was closed due to construction so I figured I would just play it by ear. Riding through the BRP, there were areas where the asphalt was brand new and looking at the hillside, it was evident why. Recent landslides have torn up a lot of pavement forcing closures which is what I am assuming happened between mile marker 250 and 225 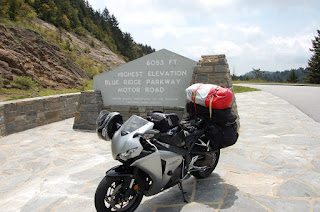 where the parkway was closed. I got off at NC 18 near Sparta and headed for the first gas station. After filling up, I plugged in campgrounds on the GPS and found a couple choices. The first few I called were too expensive at $25 plus. I found this place A and C Campgrounds near Sparta for $15 and it was only 10 miles away so off I went. When I got here, the owner told me I was the only here for the night, sweet! Well, kind of, its nice to have peace and quiet, but I would have like to see some other riders and shared some stories. I decided that if I heard any banjo music, I would pack up and head for a hotel, ha. No worries though, I found a place in the back near the creek and pitched the tent. Ive gotten quite good at pitching the tent off the bike, 5 minutes later I was pulling out the stove to cook dinner. Stove primed, I went to go take a leak and came back to find the fire had gone out. So I primed it again but the stove was already hot and was evaporating the fuel before the wick became wet. So I had to open the fuel valve more than I normally do which caused a nice fireball, fun. Good thing the wind blowing away from me. Note to self, don’t leave the stove until I’m finished cooking. I boiled some water and poured it into my ready to eat freeze dried chicken teriyaki. Not too bad for camp food. I inhaled the sweet rice and chicken and cleaned up my mess. Now its time to finagle with the bags a bit. Early on the BRP, one of my ratchet strap had broken and I almost lost all my camping gear. Luckily I carry a spare so a few minutes later I was back on the road, but now with no spares. After getting to the campground, I noticed that my left hand side saddle bag had been rubbing on the tire a little, hmmm, that’s not good. This must have happened in just the last few miles, hopefully the rear damper isn’t giving out on me and it was just the big bumps on the back road leading to the campground. I adjusted the straps and raised them up a little bit only to find that the same bag has a 6 inch tear at the bottom. Shit. I hope it 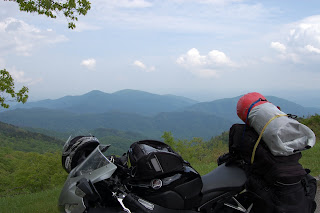 makes the rest of the week. When I get back, I’ll have it fixed then reinforced with some leather to hopefully prevent this from happening again. Also need to get rid of some weight. I have a lot of extra clothes with me this time since I had to work at the racetrack last weekend so hopefully it wont be as bad for my long trip. I have to consider leaving the laptop at home though. The weight may end up killing the stitching and seams on my bags and end my trip prematurely.

9 pm. Sun has pretty much set and the only light I have is the laptop and my headlamp which I havnt fired up yet. It will be bed time pretty soon. A few pages of my book then Ill be ready to rest. Its been a long day and Im looking forward to crawling into the sleeping bag. Over 12 hours and 400 miles today. Tomorrow will be about the same, but I don’t have to camp tomorrow so I can ride later into the evening. Casualties for today - one ratchet strap, 2 suicidal squirrels, almost a turkey, two cereal bars, one red bull, a bag of Doritos, large bag of premade teriyaki chicken and my saddle bag. The crickets and birds are singing their song and the creek is babbling. I can hear sportbikes in the distance between the clacks on the keyboard. The air has gotten cooler now and the sleeping bag is warm and toasty so this is it for tonight. 6 am wake up call again. Forecast for the rest of the week looks bad, I know I will run into rain at some point. Hopefully all my new 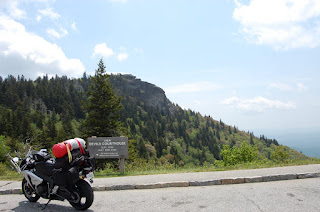 dry sacks do their job. 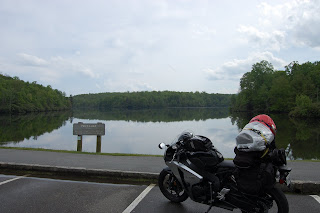 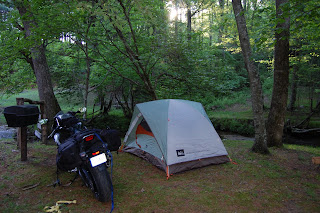 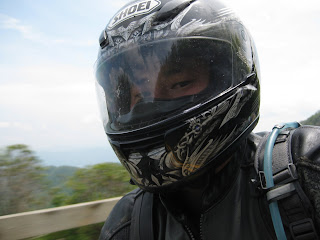 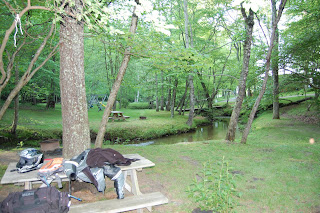