Now that you’ve met Jess and know a little about the basics of my trip, I guess I should tell you a little about me and some more background information on the trip. On October 19, 1984 I was born in Sao Paulo, Brazil to a Taiwanese family who consisted of my dad(Owen), my mom(Amy) and my brother(Willian). Like most immigrant families, my parents left their motherland in search of opportunity and they ended up with a small grocery store and a family run mushroom farm near Sao Paulo. I guess it wasn’t what they were looking for because we eventually moved to Los Angeles, California where we lived with my grandparents in Alhambra. It was there that my parents started working in a restaurant with family. A year later, the four of us once again decided to pick up and move. We piled into a 1990 Honda Accord with little more than our clothes and a few possessions and made a cross country drive to Sebastien, Florida to live and work with family. Another town, another restaurant and another small home with two families each piled into a single bedroom. Just a few short years later, we made one more move. This time we ended up in Macon, Georgia. I’m sure by now you can guess, but another small town, another restaurant and this time a small apartment. There must have been something about Georgia that my parents liked because at the moment, they are still working in Macon and living just outside of town. 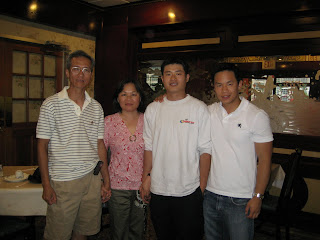 The Jang family in 2009. Thats me second from right.

I don’t know if it was the constant traveling as a kid that gave me the hunger to travel or if I was always destined to be a wanderer. I never could stay in one place for very long, I tell people I get bored easily but I’m sure there is probably some other reason that makes more sense. Accompanying my nomadic lifestyle is the need for speed and adrenaline. This combination lead me to race cars and a career twisting wrenches on several different types of race cars. Plenty of speed and traveling, but lots of early mornings with late nights can be tiring. The plan for the trip was to take the rest of the year off work, but realistically I needed to work just a little so I can have some money when I return. When I was asked to do fly-out events for the remainder of the 2011 IMSA Prototype Lites series I realized that the race schedule somewhat followed my travel plans. After some thought, I decided to work the 6 races even though it would put me in Alaska way later than I had originally planned. This might end up being a really bad idea, I‘m imagining a massive snow storm as I‘m stuck on the side of the road on the Alaskan Highway. 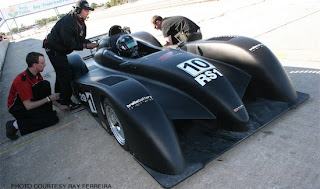 Sebring International Raceway 2008, I'm the one with the headset.
The plan is still to leave in Mid June, but my first major stop will be in Lime Rock Connecticut for the first event, then two weeks later is the second event at Toronto, Canada. From there it gets a little complicated and I will have to ride ahead and fly to the remainder of the races if I even want a chance of riding Alaska. The logistics have been challenging but things are moving along nicely. I’ve almost completed the major challenges like finding places to leave the bike and gear while I am working. Still finalizing things in Seattle and Minneapolis. I can’t thank my friends and family enough for letting me crash on couches or leaving my motorcycle in garages. I apologize in advance for stinking up the place.

Now with a work schedule to maintain, it is almost easier to plan out the route. There is one section of the country that I will now have to just zip through, but luckily it’s a section that I don’t feel too bad about rushing through. With the basic schedule outlines, I’ve started to finalize packing and equipment. Ive laid out all the tools I plan on taking and all the camping equipment has been checked and double checked. All I have left in the packing department is deciding how much clothing I can realistically fit and purchasing a few small thing to complete the kit. I will probably end up leaving the tripod this time, I know I’m going to regret it, but I think it will be better in the long run. This is it for now, I’ll leave you with some pictures of some of the prep work and also some pictures of the type of race car I’ll be working on. 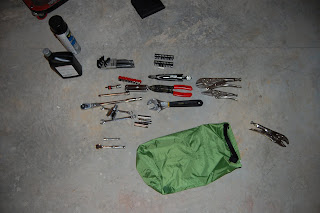 Contents of tool bag.Hope not to use this bag. 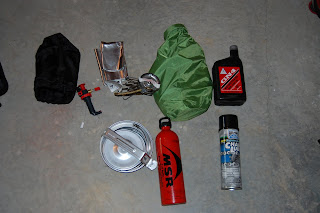 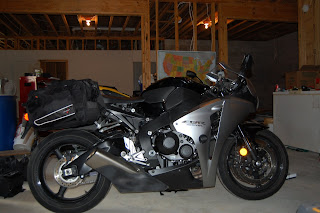 Jess in the workshop with the map of the US. I feel like the map is just staring us down waiting for us to conquer it. 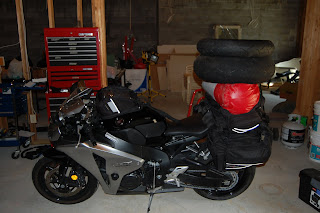 All loaded up. Okay, I'm not taking the tires, thought about it though. 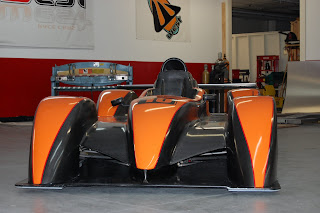 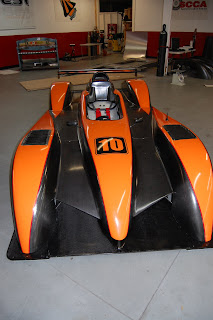