After hitting the snooze button a few times, I finally dragged myself out of the sleeping bag. I wasn’t doing myself any favors sleeping in knowing the long ride that lay ahead. Today, I was going to finish the Blue Ridge Parkway and then Skyline Drive leading up to Front Royal. I ended at mile marker 240 last night so that left me with 240 miles of the BRP and then 175 miles of Skyline Drive. Taking the detour around the 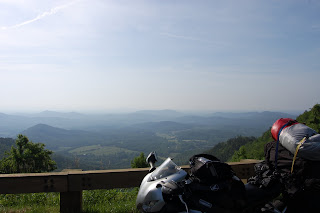 closed portion of the BRP took only 15-20 minutes. Pretty soon I was already on the BRP and an hour later I decided to pull off and take a short break, check my bag and do some bike maintenance. When I pulled off into the restaurant, there was a Harley rider with all his bags off and tools out. I asked if everything was alright and if he needed any help, apparently his bags were fairly new and had stretched a little causing them to rest on his exhaust. I left him punching new holes in his leather strap and went off in search of the bathroom. On the way there, I saw a BMW GS loaded up with gear. All over the bike were stickers from Australia, Pakistan, Iran, Iraq, India, China and so many more. One day that will be me.
After taking a few minutes to lube and clean my chain, I headed north again stopping only when I needed to take a break. I think I have enough pictures of the Smoky Mountains by now, but I did grab a few more when I stopped. At one of the overlooks, the Harley rider I saw fixing his bags came riding by so we gave each other a wave and a nod. That’s what I love about motorcycle riders, somehow even worlds apart, we still have a respect and understanding for one another. I would catch up to him a few miles down the road and he let me pass since I was doing about 5 mph faster. 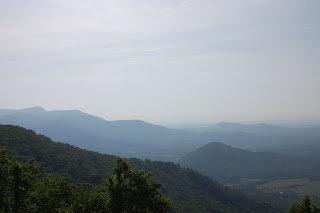 I pulled off the parkway at the first Roanoke exit for a drink and snack. When I pulled up to the gas pump, guess who was right behind me pulling up to a pump, that same Harley rider. We laughed and said our greetings once again. I grabbed a multigrain bar and a powerade and chatted with the harley rider for a few minutes. He was from Missouri, been riding for about a month now. He was doing the BRP and then had no real plans after that, maybe New Jersey he said. Apparently he had grown up in the Tennessee area and spent years hiking the Appalachian Trail and the Smokies. He had not been back since his hiking years so that morning was the first time in 30 years he had seen the fog rolling in on the valleys. I noticed he had a sleeping bag strapped to the back of the bike with no kind of cover for it and I asked him about it. Apparently he just didn’t own a cover and slept in a wet bag the other night. I gave him a couple of extra trash bags I carry with me for storing wet clothes, it was going to rain later today and I couldn’t let the man sleep in a wet bag in the mountains, its chilly enough in the mornings without being wet.
After half an hour of sharing stories and just chatting, I had to get going, I was killing too much time. I headed back on the BRP and into the dark clouds ahead.

An hour later, the rain came. Just light at first with a whole lot of wind. I contemplated not stopping to put on the rain gear. It seems like everytime I put on the rain gear, it doesn’t rain, but when I decide to leave it off, it pours. So I pulled off and threw it on. While I was putting my pants on, the guy on the Harley rode by again. Ha, we would continue this leap frog for quite a ways. For all the time we spent Bsing, I never got his name. I got all my gear on and kept going, and no, it didn’t really rain. I got some light stuff, but nothing bad, I am glad I covered the bags though because the water spray from the tires would have soaked them. 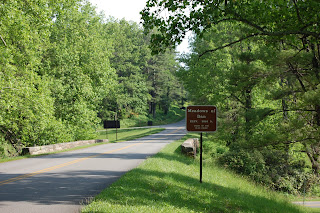 By the time I got to the end of the Blue Ridge Parkway, the sky had started to look darker and darker. Great, at least I have my gear on already. I pulled off before getting on Skyline Drive to fill up on gas and caffeine and guess who I saw one last time. Haha. He was pulled over in a closed and deserted hotel and was unpacking his things. I think he was going to camp out that night at the old building. I waved and kept moving, it was going to be a late night if I didn’t.


The Meadows of Dan


The entrance station to skyline drive was closed so I didn’t have to pay to get on, although it did say to pay when I got off. So Skyline Drive was fairly desolate at this time of day and with the dark clouds looming over us, tr I managed to ride the entire road in really good time and only saw a handful of people. I exited Skyline Drive at Front Royal and the exit station was closed, ha. So that was the first time I have ever ridden the SD for free. Getting in to Front Royal, I headed straight towards my friend Lou’s tattoo shop. I havnt talked to Lou in several years at this point and had lost his number. I was hoping to just show up and see him hunched over someone with needle in hand. Unfortunately, that wasn’t the case, the shop was no longer there and the apartment he lived in above it was empty. Too bad, I was really looking forward to seeing him. After a few phone calls to Butch, I found that that Lou was still somewhere in the area, but everyone had kind of lost track of where he was and what he was doing. Maybe next time Lou. I headed over to meet Butch at his apartment. Butch was still the same Butch. Hilarious. He was still driving trucks but no longer for race teams. We chatted about all our old drivers and where they had ended up. A few of them were driving IRL cars now, one in particular just a nasty crash at Indianapolis 500 qualifying but she still managed to make the race. Good for Simona.

Butch informed me that a couple of other guys from the team were still around so we called up KC who was our other painter. He came right over and he showed me all the cars and motorcycles he had since I last saw him. He must have been through 20 vehicles since I last saw him and Im still driving the same car and only two bikes have come and gone. KC had stopped painting was doing a electrician now. He seemed to be doing really well for himself, just bought a house with his girlfriend and was growing up. After an awesome dinner, KC had to head back and Butch called up Matt, another mechanic. We went to see ole Pappa Smurf at his house a few miles away and caught up. I told them that I would be back in July and we should do a 4th of july celebration at a campground. They seemed pretty enthused about it so hopefully we can make it happen. It was getting late at this point so we headed back to Butch’s place and watched Dancing with the Stars with his girlfriend until I passed out on the couch. The next morning, Butch left for work at 6 am and unbeknownst to me, left me a note and some cash. Wow, Butch. I was planning on leaving him some cash for the dinner and place to stay. I wrote a note back thanking him and Debbie for their hospitality and started packing my things. Butch, I’ve never met another person like him. Always good for a laugh. He had the look of a trucker but the soul of Ghandi. I will be glad to be back in July to see him again. 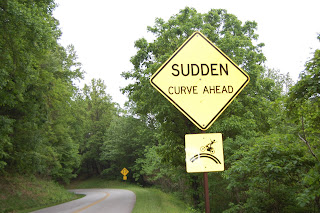