Today was a short ride. From Macon to Atlanta, just 2 hours. I didn’t have to be in Atlanta until 4 pm so I slept in and did some quick service to the bike. I also went to Walmart to get more bug spray, some black paint for the new saddlebag supports and also some sunblock. I have a nice reverse raccoon face going now from my clear visor. After cleaning and lubing the chain I started to get ready to leave. Forecast for the day was rain starting at 4 pm so I was hoping to leave early and get to Atlanta before the storm. It was supposed to be a pretty bad storm, high winds and hail. Of course, I didn’t leave early. Right when I was ready to go, it starting pouring at my parents house so I just watched it rain for a bit. Right at 2pm it stopped so I hopped on the bike and headed out. To make it there in time I just took I-75 up and got off downtown and starting looking for the Public Safety office on Peachtree street. Missed the rain the whole way up luckily. It took a while to find, it was not where I thought it was. I park the bike next door next to a bunch of police cars thinking it would be safe, but I asked one of the officers and he said chances are my stuff would be gone within the hour. Really? Right in front of all these cops? Whatever. I went inside the building and checked in, went through the metal detectors and forgot I had my pocket knife in the camelback. Security took it out and held onto it for me. Then Lt. Guerrucci met me downstairs and I asked him where there was secure parking. He told me to just jump the curb and pull right up to the front door and the security guards would watch it for me. Cool. Then he lead me and the reports up to the conference room. They asked the usual questions and we demonstrated the Project Lifesaver tracking devices. There were a few different channels there but it only lasted an hour or so. Lt. answered most of the questions and I just pretty much hung out and talked for maybe 15 minutes. Then afterwards, they filmed my bike for a minute and then I took off with the cameras rolling. This press conference was pretty easy going and really simple. I mentioned the bad weather coming at one point and the reports said it had all moved south of Atlanta. One also said don’t worry about it, if there was a hailstorm, we would be out covering that and not you, haha. 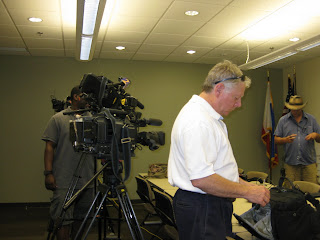 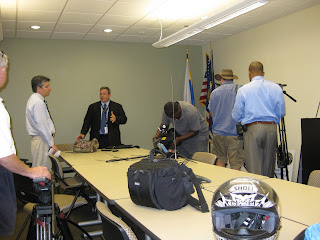 Traffic was horrendous downtown so it took me over an hour to get to Cody’s place in Buford. Cody wasn’t there yet so I went through the garage door and took a quick shower. Afterwards, we decided to have dinner at Wild Wings, two for Tuesday which is something we have done for a long time. Mitsue, Cody’s girlfriend met us at the restaurant and I devoured some wings and we had a couple of drinks. We had a great time just hanging out and I told them about my trip thus far. Then we talked about Cody’s prep for his big trip this weekend. Went over some things that have worked for me and things that haven’t. Hopefully his saddlebags hold up better than mine. Cody is one of the first people I started riding with years ago and also was a roommate for quite some time. Definitely one of the best people I know. I wish him luck and safe travels on his ride with his grandfather After dinner we watched a video of Cody and some other friends latest scooter excursion. Absolutely hilarious. I miss my Zuma and I was depressed I wasn’t riding with them that weekend. Two of the scooter that were there were from my old job and I had ridden them both, one actually used to be my scooter. Then we watched the news report that was done on me in Palm Beach Gardens. First thing I said was, “Do I really sound like that?” haha. Weird to listen to yourself. I totally forgot to order the new part for the GPS and I have zero internet or phone service tonight so hopefully I can get it done tomorrow. I ll have to stop by a Starbucks to use the internet or something. 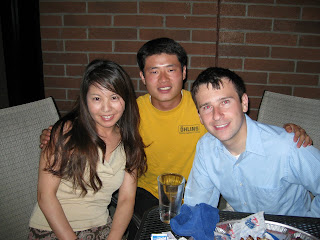 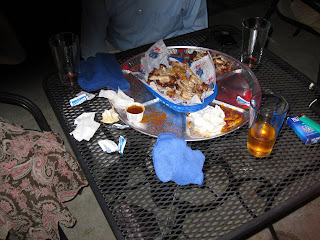 The after shot. Half price wings and Sam Adams Summer Ale

Tomorrow, I’m headed for the twisties and camping at Deal’s Gap. I’ve been to the Gap quick a few times but never stayed at the motorcycle resort. It’s a days ride to go up through TN then ride the dragon and head back from Atlanta. I’m looking forward to it since it will be a weekday and it won’t be packed with bikes and cars. 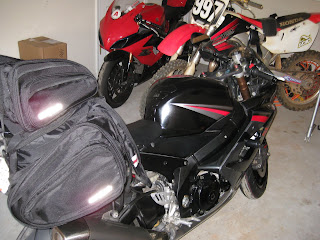 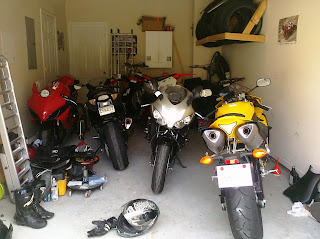 We used to fit 7 bikes/scooters into a single ccar garage at Cody's place. Best garage ever.
Posted by Dazn at 10:23 AM