I got up at 10am today and lazily picked up the site. It was supposed to be a 3 or 4 hour ride up to Bar Harbor, Maine so I was in no rush. Went to a gas station and filled up and made a few phone calls and checked and replied to a bunch of emails while drinking energy drinks. When I went inside, I passed by this tall blonde girl all dressed up and she says to me, “You look like a ninja!” I laugh and reply, “Never heard that one, I usually get Power Ranger.”

She asks me if I rode all the way up from Georgia so I give her my whole story and all of a sudden she is super excited and interested. She invites me to lunch with her and her friends but I decline since Ive already got a late start and wanted to ride around Acadia National Park for a while. She took a card and promised to follow along. I get back to my emails. I am doing a press conference for Project Lifesavers in Buffalo on the 18th now early in the morning so I need to be in Buffalo by he 17th which is a day earlier than scheduled. That means I lose the extra day I planned on spending in Acadia and am an extra day behind since I stayed in Lime Rock prepping the race car. Better get on the road then.

I decide to take US1 the whole way up to Bar Harbor since its supposed to be a nice scenic ride. Coastal Maine is the surprise highlight of the trip, I never realized how beautiful this state is. I always figured it was just cold, miserable and woodsy. When planning this trip, I didn’t even take into account Acadia National Park until my friend Clint recommended it. When I first got on US1, I see a Tim Hortons. Woot!!!! I love Tim Hortons and wish we had them in Georgia, they have the best ice Cappucino so I stopped and had lunch and made a few phone calls. On the way up US1, there were tons of awesome scenic views that I could help but stop to see. The 3 hour ride turned into a 6 hour ride. 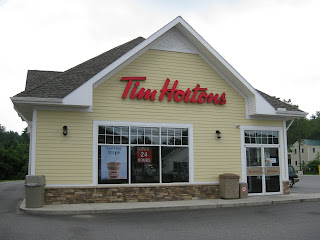 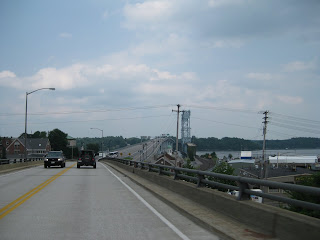 
At Harbor Pointe, I pull off to take a picture of a small beach next to a lobster shack and a guy walks up and asks how long Ive been on the road. He and his buddies rode their Goldwings up from Kentucky and were planning on visiting Acadia and Madawaska like I was. We chat for a second about riding and a good place to eat lobster and I hit the road again. Maybe Ill see them later in Acadia. 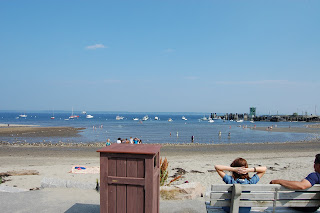 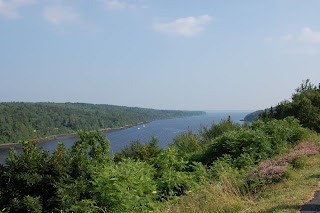 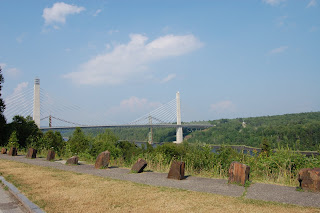 US1 in Maine is so much nicer than US1 in Florida. I was in a great mood riding up and even the mp3 player seemed to recognize my mood and played all my favorite songs on shuffle mode. It eventually got to the point where I knew I had to quit stopping and taking pictures so I put my head down and cruised to Bar Harbor and went straight into Acadia National Park. I bought the Interagency Pass that would allow me entry into all national parks and asked about campgrounds in Acadia. Blackwoods was full but Seawall had a few openings. Problem is that Seawall is on the other side of the island, and its not a small island. If I wanted to campsite, I had to hurry. Another problem, its too damn pretty to hurry through. I head towards Sand Beach and stopped to take some pictures at a rocky overlook. Absolutely amazing. The best thing I have seen so far. I hiked out to the rocks through a rough trail in full moto gear and took some pictures while resting. 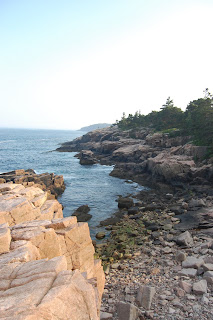 I have tons more pictures on my Facebook so if you want to see more, just friend me. 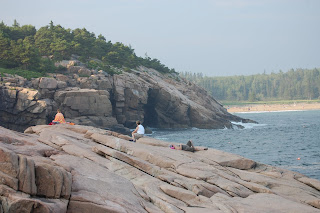 Its already 6:30 at this point and I still had a ways to go to make it to Seawall. I get back on the Park Loop and ride most of the way around then decided it was time to find the campground. I got lost a few times and had to refer to my park map, but I eventually find it around 7:30. There was one spot left, how lucky am I? I pay $14 for the site and go back outside to start up the bike. The sky looks dark so I hurry to the site. As Im unloading the bike, it starts to pour. Crap, really? My tent site is underneath trees so I have a little bit of cover but everything gets absolutely soaked regardless. The tent is soaked, the sleeping pad is soaked, I’m soaked, the bags are soaked, everything but the sleeping bag since I kept it in the dry bag. After the tent is pitched, I use my camping towel and a bunch of dirty clothes to try and mop up the water and sit in the tent and listen to the rain fall. It stops raining at 8:30 so I step out and get dressed to find food. There is a small pizzeria/lobster shack about 5 miles away so I pull in and get a seat. Everything is super expensive as expected. I’m in Maine for the first time so I want some lobster, but its way out of the budget. I settle for a lobster roll which is a third of the price. Its pretty damn good. Riding back to the campsite, I stop at the natural seawall and snap a few night shots. On the way back to the site, it starts to pour again. I climb into the tent and the floor is soaked because my site is flooded. Great. I lay a bunch of clothes down on the sleeping pad and pull out the sleeping bag and lay down to go to bed. The bag gets wet almost immediately. Im laying there in my wet bag and listening to the neighbors talk and thinking about how much this sucks. Its starting to get kind of cold and the wetness only makes everything worse. Around 11pm, the neighbors finally go to sleep but the guy starts snoring immediately. I put my earplugs in but I can still hear him snoring over the rain with earplugs in. Really? Is this going to go on all night? I get the laptop out and start updating the blog until I get tired of it. Then I pull the book out and read a few chapters. I wanted to sneak over the drop the tent on him just to play a prank, but I didn’t want to do it to his girlfriend who was in the tent with him. I felt bad for her, Im sure she was suffering enough sleeping next to him. I snore a bit too and have had girlfriends complain about it so I decided to play nice. Finally, by 3am, Im so exhausted I fall asleep regardless of the wetness, the rain and the snoring. I wanted to get a good nights rest tonight since tomorrow would be a longer day to get to the Madawaska for my second corner. So much for that.
Posted by Dazn at 8:45 PM