I need to make my way across the border today. The sky looks kind of dark this morning so Im thinking about the rain gear before I even get moving. It’s too hot so Ill take my chances today. The border crossing at Peace Bridge in Buffalo is the closest one so I head straight there even though its usually the more traveled crossing. Luckily, there is no line and I ride right up to the booth. 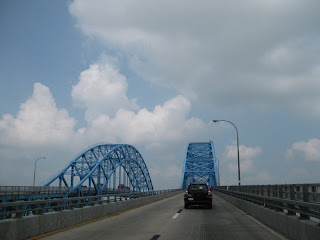 “Where are you headed?”

The office looks at me, looks at the bike, looks back at me.


That’s it? Definitely the easiest border crossing ever!

I pay my $3 toll and Im in Canada. Just after I cross, I see a white motorcycle in my mirror and watch as it creeps up to me. I recognize the headlights, it’s a Ducati 848 in white. I almost bought one of these when I was looking at the R1. This is probably the only Ducati I would ever buy. Its absolutely gorgeous. The rider gets alongside and gives me a big smile and an enthusiastic thumbs up. I point at his bike and give him an even more enthusiastic thumbs up. I like Canada already. 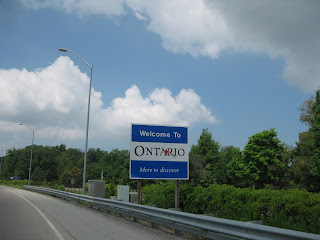 Before I even get to Toronto, I see several bikes and a few of them are loaded up like mine. I havnt seen this many bikes on long trips since the Blue Ridge Parkway and it pleases me to know Im not alone up here. Just before Toronto, I get off the 401 to eat lunch at a Tim Hortons. The first thing I notice is the wide range of cultures which is great after being in the northeast for a week now. I hear a lot of languages I can’t comprehend which I personally think is great. Apparently this Tim Hortons cant process American credit cards so I ask if they will take US cash. The reply I get is “I don’t know, but sure, why not.” Haha, maybe I should get some money exchanged.
Personally, I think north america should follow the Euro and come up with our own shared currency. We could call it the North American Dollar. Or NAD for short so we can say, how many NADS you got? But we should still exclude Mexico, I kid, I kid.

Back on the 401, a guy on a KLR passes me so I play follow the leader with him all the way up to my exit in Bowmanville. I get gas for the first time in Canada and its over $20 to fill up. This could get expensive and know its only going to be worse on the way to Alaska. I’m here really early, I wasn’t sure how long the border crossing was going to take so I go straight to the track to see who is there. Sometimes there are people testing so you get to see some cool cars that your not supposed to. There is just a track day there today so the guard lets me in so I can ride around and watch. I take some pictures and talk to some corner works and just hang out for a bit. There is nothing too fascinating going around except for a black Acura NSX and a silver Audi R8. I love the NSX, I think its one of the best looking cars ever made. The Audi R8 has a good sound to it, but is pretty ugle. At 5pm, the track shuts down so I leave and head for a Tim Horton’s to get some Wi-fi. I talk to Jake who is driving the race rig up from New York and he is planning on getting a room somewhere in the area. I plan on joining him so I can have a hotel room the night before we load in so I can be well rested for the start of the race weekend. Also, Im hoping to get some laundry done. 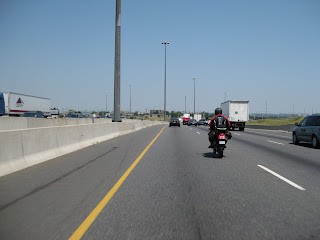 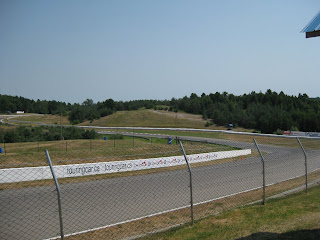 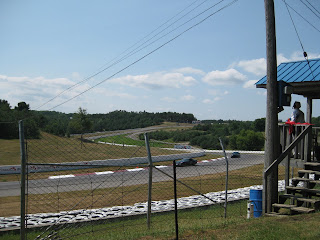 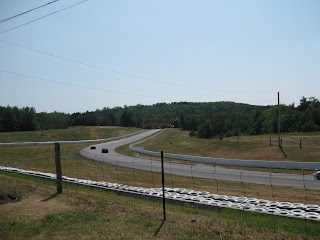 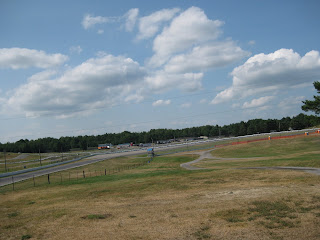 All Jake knows is that we are in a Comfort Inn somewhere near Orono. So I ride out that way to see what I can find. There is nothing in Orono. I do some more riding in the area hoping to find some sign of civilation but at this point, Ive almost used up an entire tank of gas so I need to stop. Gas is too expensive to be just riding around for no reason. So after a few phone calls, I head to a Mickey D’s for Wifi. I look up Comfort inn in Orono and nothing. I end up calling about 6 different hotels looking for our reservation. This is the good way to rack up a huge phone bill. My bill after this weekend is going to be ridiculous and its exactly what I was trying to avoid. Hotel finally found, I meet Jake there around 9 and then I do my usual gear explosion. Shower up and then hit the bed. This race weekend is twice as long as Lime Rock so Im hoping to be well rested for the start and stay that way. After this race weekend, I have just over a week to get to Minnesota for the next race so there are no off days to just relax.

BTW, the title of this post comes from a show called Family Matters. Remember Steve Urkel? The particular show is the one where Steve is showing off some invention in Disney World in Orlando and everyone in the Winslow family goes down with him. Eddie and Waldo Geraldo Faldo(Ha!) drive down separately and after a few hours of Waldo driving, Eddie wakes up and asks Waldo where they are. Waldo says, “I don’t know, we are coming up on some town called Canadia.” Eddie looks at the map and says, “That’s Canada!” For some reason, that has always stuck with me. Its retarded, I know, but it’s a random childhood memory.
Posted by Dazn at 7:01 PM