I got a decent nights sleep so Im ready to go first thing this morning. Packed everything up and hit the road. Going all backroads into Indianapolis since I have plenty of time today. Backroads around here are all straight and flat so nothing fun. Scenery is basically all farmland too. Lots of corn, soy and cows. The stench of the cows and the manure was horrible. It kept me from having an appetite all day. I don’t see how people live on farms, Im not sure if I could ever get used to that smell. Those are the times when I wish I was in a car, so I wouldn’t have to smell things like that. 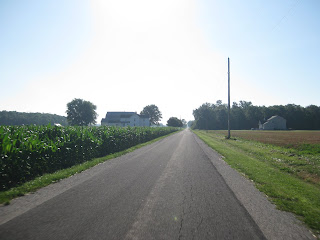 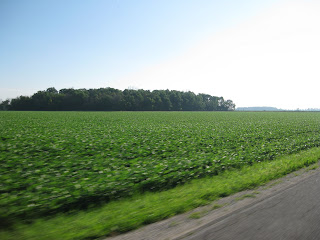 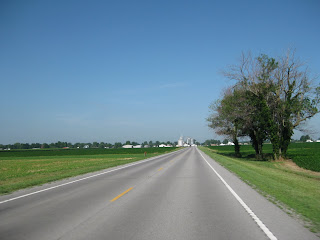 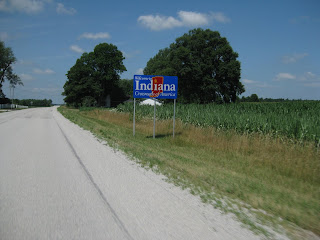 Cruising through these backroads, there are a ton of tractor trailers so I get stuck behind these things quite often. I have to stay a good ways back because their tires throw up these little rocks that hit me in the neck. The ride into Indiana is pretty uneventful. Although I did notice that as soon as I crossed into Indiana, the pavement went to bad to worse right at the state line. Small town Indiana looks just like small town Ohio. Lots of people staring at the guy on the sport bike wearing all this funny looking clothing. I havnt seen anyone wearing a helmet or any sign of protective gear all day while riding. Personally, I could not ever ride that way. I like my skin.

My GPS leads me straight into downtown Indy. The dealership where my tires were shipped to is on the west side of town so I rode through downtown. I had never been downtown before, only to the speedway and Gasoline Alley so it was kind of neat to see. There was a lot of construction so it was slow moving and hot. 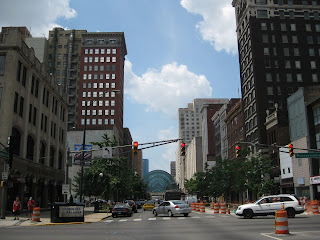 Finally, I get to the dealership and cool down for a bit with some water. Inside at the service department, I give them my name and ask if my tires were there. Yup, a box with your name on it is here.
These guys aren’t too friendly. The service manager is giving me these looks like he’s saying why the hell are you here?

So how much is it to have the tires mounted?

“Whoa, I just want to have the tires mounted. I’m gonna take the wheels off myself.”

“No, we are doing all the work. That’s what was set up. Its $200 to have the tires mounted and balanced on the bike.”

“You had the tires drop shipped here so we are doing the work and since you didn’t order the parts through us, we are charging you the difference in price of tires.”

Okay, that’s just absolutely ridiculous. This guy is serious too. I don’t even know what to say to this guy at this point so I try explaining to him that Im on a charity ride and ask if could cut me some slack. He’s still making easy money on labor to change the tires, I even offered to pay extra for the tire change. But he’s not having any of it. He tells me he didn’t need the extra hassle and responsibility of having tires drop shipped to him if he’s not making the full labor and parts sales amount. Okay, I get that the dealer is in it for the money, but that price is outrageous. If it was something more reasonable, I would have been happy to pay them so I wouldn’t have to deal with it. But not only was the price outrageous, but the service manager was just being a prick. After arguing back and forth for 20 minutes, I finally had enough and said, “ Your not touching my bike, Im taking these tires and my business elsewhere.”

This pisses him off and he starts going off about how my sponsor knew about the price and labor charges and everything. I know if Ross was told it would cost me $200 to change the tires, he would have just laughed in their face and hung up the phone. This service manager is trying to put one over on me and Im not having it. I’m a mechanic, I know how this stuff works. He thinks just because Im from out of town I desperately need to have it worked on by him. Wrong! I will change those tires by hand if I need to. I do it all the time.

I ask another mechanic there if they can cut keys so he takes my key and goes to the machine. Well, apparently their blanks are different and my key needs to be special ordered. Crap, so much for that. I leave to go to my friend Shawn’s house down the road with a plan to pick up the tires and take them and my wheels to another shop.

Shawn is also a race car mechanic and we worked together in Virginia on a Formula BMW team. It’s the same team that Butch(I stayed at his place after BRP and Skyline Drive a few weeks ago) and KC worked on. Shawn is now working at a composite shop making things for the government, satellite dishes and some race car parts. He doesn’t get home until 4 and I’m there at 3 so I just head to a gas station and chug lots of Gatorade and start looking for other shops to have my tires changed. I go back over at 4 and Shawn pulls up behind me. It’s good to see him again. We had some great times together in Virginia. Shawn is another one of those guys who is usually all smiles and just generally has a good attitude making him enjoyable to be around. I pull the bike into his garage/man cave and start working on the bike. He also rides and so does his wife but he doesn’t own stands so I just a jack, a piece of wood and jackstands to get the bike up in the air. It’s a bit of a hack job, but it does the trick. It was a little sketch, but its stable. Their roommate Greg, who also used to be a race car mechanic needed to go to KIA to pick up some parts for his car. So we needed to get to KIA before 5pm, then to the bike dealership by 5:30 to pick up my tires, then to another bike shop to have the tires done.

We are pressed for time, its already 4:40. We make it to each spot with minutes to spare. At the dealership where my tires were sent, the service manager is still annoyed and wants me to fill out paperwork saying I picked up tires and wants the phone number to my sponsor so he can talk to them. He asks for my information and as I give it to him, he writes down a letter, scratches it out, writes down the right letter. This guy is dyslexic or just plain dumb or something. Every thing he writes, he scratches out and re writes. I wish I had a copy of this paperwork because it looks like a 3 year old wrote it. I just shake my head and take my tires and brake pads. When I take the tires out of the box, I notice they are the wrong compound. These are the pilot powers which are way softer than the Pilot Roads that I need. Shit. These tires will get me to Seattle at best when the Pilot Roads would have gotten me to Alaska and back to Seattle. Also, there was only one set of brake pads when there should have been two. My bike has two front calipers so one set does me no good at all.

I call up Ross and let him know. Pilot Powers are usually what I use so when I told him Pilot Road 2s, he heard Pilot Power 2cts which is what he ordered. Well, I have no choice but to put these on. Ill just have to order another set for Seattle. That’s another $250 that wasn’t planned into my budget. I’m extremely annoyed at the extra costs now but there nothing I can do but just get on with it. We take the rims and tires to a shop called Fastlane in Gasoline Alley and the mechanic mounts it up for me for $45. Much better. 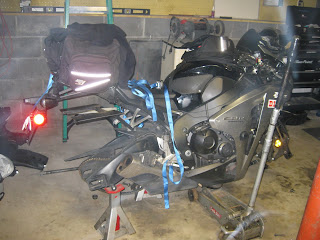 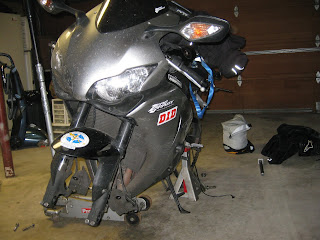 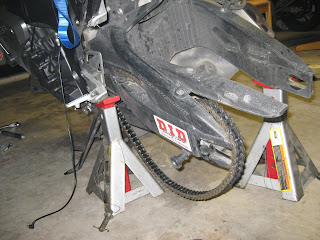 At this point, I havnt eaten anything all day so we discuss dinner plans. We decide to grill so we head to a Meijers grocery store and pick up some bratwurst, chips, potato salad and some drinks. I buy since Shawn is letting me stay at their place and I put him through the hassle of having to change the tires and everything else.

The engineer from the Formula BMW team is also in Indy now so I had contacted him a few days ago about meeting us for dinner. We told him our plans and he decided to come join us for brats and dogs. Back at the house, Greg starts cooking up the food and I start putting the bike back together. Jon, the engineer, shows up and we have a Gelles Racing reunion. It was good to see Jon again, I hadn’t seen him since I left the team in 2006. He, like most other people I know, had settled down, bought a house and all that good stuff. Not married yet, but has been with the same girl for 4 years. 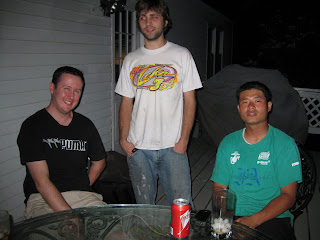 left to right
John, Shawn then me

Shawn got married a few years ago. While in Virginia, he and another friend Mike, were both engaged to girls named Jennifer who both had diabetes. Strange coincidence. We had dinner on Shawns back porch and caught up for a while. Had some good laughs and shared some good stories from the past and about some of the other people on the team who had some funny experiences. One in particular really got to me. it’s a long story, but if you knew the guy, its a good one. 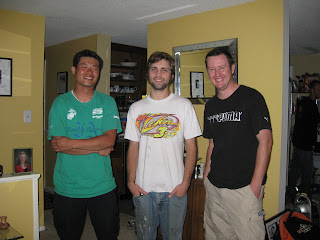 Good times. Good times. We got a few pictures then John went back home. it’s a weekday so everyone has to work tomorrow except for me. Haha, I m just tooling around on a motorcycle and its great. We stay up for a while longer just killing time then I eventually went to bed after dozing off on the couch a few times.
Posted by Dazn at 10:08 AM