Today Im heading to Blooming/Normal Illinois to see yet another team member from the Formula BMW team. This ride has almost turned into a Gelles Racing reunion ride. I wish I had been able to ride to South Carolina to see Mike because it would have completed the reunion. Doug came to the race team later in the season but being the hilarious and charismatic person that he is, he was instantly one of the guys. He is always good for a laugh.

I sleep in late today since Bloomington is only a few hours away. After I get up, I get some more emails done and start packing up. Its almost noon now and Im actually leaving a bit later than intended, but no big deal. Greg is still at the house working on his car so I end up shooting the shit with him for a while. After about ½ hour on the road, I look down to pull my camera out to take a picture and then I realize I left it on the coffee table at Shawns house. Crap, I turn around and head back. At least I wasn’t too far away. Back at the house, no one is there. I call Shawn at work to get Greg’s number to find out when he would be back but Greg doesn’t pick up. Guess Im hanging out here for a while.

Greg shows back up after 15 minutes or so and he looks pissed. He went to his storage unit to pick up some tools to work on the car and apparently someone had broken into it and stolen a lot of his tools and his TV. Being mechanics, tools are our bread and butter. If you work on cars or bikes, you know that good tools can be extremely expensive. I felt horrible for him. I wish there was something I could do but Im just as helpless as he is at the moment. Just another reminder of the fallacies of the human race. Some people just refuse to make an honest living. Nobody is perfect and people come across hard times, we have all been there. But there is absolutely no reason to steal from others. I’m running behind already so I had to leave shortly after but it was difficult to leave. I thought I could come up with a way to help, but there really isn’t much I could have done. If I lived in Indy, I would have given him my tools so he had something to work with. It just plain sucks to be robbed….


Back on the road, my mind is wandering about the robbery. I’m still trying to think of a way to help even though I know there isn’t much I can do. But brainstorming doesn’t hurt. Then all of a sudden, the two pick up trucks in front of me dive and smoke completely envelopes me. OH SHIT!

ZZZZZZZZZZZ Im hard hard hard on the binders, harder than I have ever squeezed that lever on the street before. The truck directly in front of me swerves right into the grass. The one ahead of him is completely locked down in a straight line. I swerve to the left onto the double yellow line. Just as I do so, an oncoming car passes me and I feel like it was just 6 inches away. The truck that swerved to the right is sideways in the grass, the truck that was in front is stopped half sideways in the middle of the road, Im stopped on the double yellow next to him and when the smoke clears, I see a horse and buggy in the middle of the road.

What the hell just happened. My heart is about to burst out of my chest and my hands are shaking so much I cant hold the brake and clutch lever anymore. How close did I just get to death right now? How freaking lucky am I to have missed both those trucks and that oncoming car? I don’t feel like I was following that close and my fingers were already covering the brake like usual but somehow I still ended up next to the truck. I’m using crappy brake pads but was it enough of a difference to stop that extra 5 feet?

We got moving again once the horse and buggy moved to the side. Did the first truck not see it? My mind is just racing wondering how that just happened. My hands are still shaking so bad I can barely pull the clutch in to get going again. I pull off at the gas station just an 1/8 of a mile and sit down on the curb and re evaluate myself. Was I following too close? Was my head not all clear to have that split second reaction time? How did I end up next to the truck? I should be braking better than those big trucks. How did that go wrong?

I sit there for half an hour racking my brain for answers. Nothing. I have to mind my distances much better. That was really way too close. At this point, nothing to do but shake it off and keep going….at a much more subdued pace…..


I get to Bloomington at 5ish and call up my friend Doug. I head over to his new place and Doug being Doug, gave me a hearty greeting. Ive missed Doug, always a good time with him. First thing first, I check out Dougs new projects. We are both big import car nuts so I was curious as to what he has gotten into lately. Last time I saw him, he had a super nice Honda Fit and bought a Honda CBR600 while in VA. I was surprised to see that he was driving a Honda CRV SUV now. I wasn’t sure if I was in the right place when I pulled in because I didn’t see a modified import in the driveway, then I saw something hanging in the back window of the CRV and I knew it was Doug, haha. While outside, his neighbor brought over a magazine that was wrongly delivered. It was a Baby Talk magazine. I look at Doug curiously then ask, “Baby Talk? WTH?“
“Oh, you havn heard! Me and Yoko are due in a few months!”

Doug, a father, that kid is going to have some fun!
We go in, check out his new place and I get a shower and change my underpants after the close call. Then we relax a bit and watch the Japan vs. USA Womens World Cup Finals. At one point after the US scores the first goal, a little chubby kid flashes the camera and we have a good long laugh about it. It was classic. A couple of Doug’s friends come over and we hang out and chat for a bit. Then it was time for dinner, Doug asks what I feel like, sushi. Apparently there is a local place that does all you can eat. Uh oh, those guys are in for a non-profit night. We ride over with Doug’s friend Josh in tow. Immediately, we order some sake and start checking off the list of sushi rolls. We order at least 10 for the first round. We inhale those and keep ordering more. I lost track of how much sushi Doug and I had. It had to be somewhere around 15 or 17 rolls. Josh just watched in amazement. Close to the end, we start ordering just one roll at a a time. After we would finish it, we look at each other, “one more?” Of course!!! 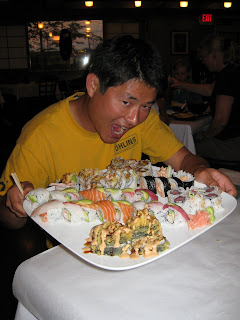 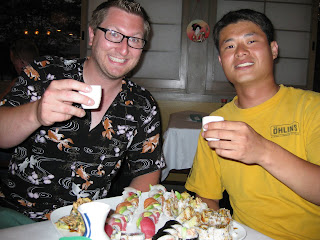 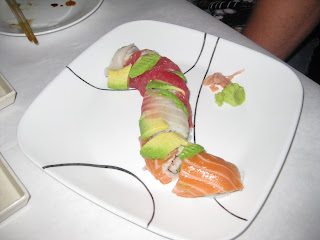 I’m so stuffed we barely finish that last rainbow roll. I want more, but theres no way I could eat half a roll. This restaurant better be glad Im not a local, they would not be in business long. After a great meal, we waddle back to Doug’s car and he shows me around town. First stop, the State Farm Insurance building. State Farm started in Bloomington so it’s a big deal around here. Then it was the Beer Nuts factory. Ive never heard of it, but apparently its big. We grab a few pics then head to the next stop, one of Lincolns law offices and the original State Farm building downtown. After that, we start heading out to the middle of nowhere. Doug says it’s a surprise. But first, we stop at what looks like an old grain silo. It’s an indoor rock climbing place, used to be the tallest indoor climbing venue. Too bad we couldn’t make it during the day, it looked awesome. Im not a rock climber, but Id love to get into it. Looks like fun. Then we drive further out of town. I have no idea where we are going and Doug doesn’t let me in on the secret. Then we come across a street sign that says Mitsubishi Motorway. Ha! it’s the old DSM factory! Awesome! DSM is Diamond Star Motors, they used to build the Eclipses and all the other copies here. I knew the factory was here and being a big DSM and 4G63 fan, I had asked Doug about this place a few months ago when I told him I was visiting. We go to the main entrance and check out the factory. Its night at this point so we cant do a tour or anything but its still cool to see. The main office is empty of show cars and so is the parking lot. There is not much going on here anyway which is sad. Mitsubishi used to make some excellent cars. 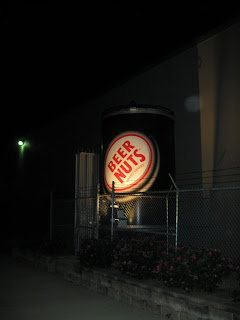 Whats the difference between Beer Nuts and deer nuts? 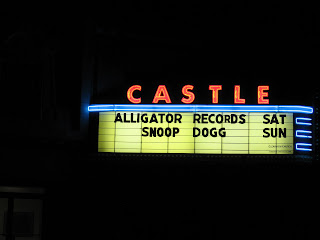 Snoop a loop in Bloomington? 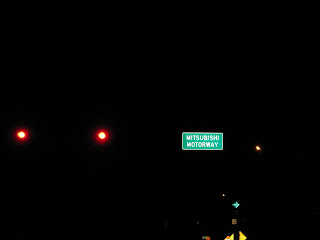 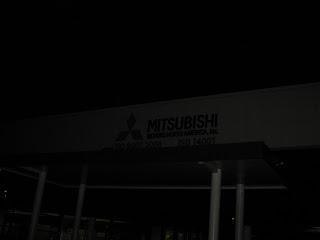 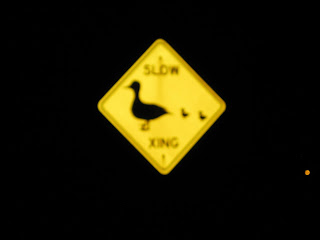 I love the random street signs.

After the DSM factory, we head to his dad’s house to drop off some corn and we chat there for a while. His dad is pretty cool, small house and bigger garage. My kind of place. He has a bunch of pictures up in his garage and apparently, Dougs whole family used to ride motorcycles. Awesome. If I ever have kids, they will be forced to ride and race, haha. Back at Doug’s house, we watch some TV and call it a night. Its been a good evening, we joke about how we could both use one more rainbow roll, hahaha.

These past two days have been great. Not a whole lot of good riding, but fantastic to catch up with old friends. Ive had some good times with Shawn, John and Doug and these will only add to the memories. I will definitely keep in touch with these guys.
Posted by Dazn at 6:06 PM