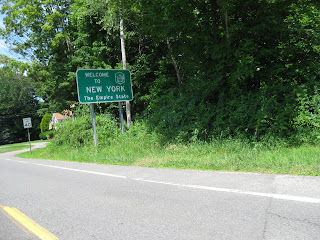 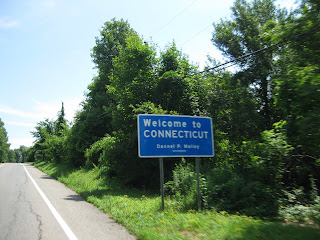 So my schedule puts me at Lime Rock Park in Connecticut for race load-in the morning. I was supposed to get up really early and get to Lime Rock by 10AM but I kept hitting the snooze and waking up my neighbors, sorry guys. I didn’t get out of the campsite until 10 am. I stopped by the first gas station I saw to fill up and met a couple of other riders. One from Ontario and the other from the Catskill area. They were just riding around for the day so I asked them what was a good way to get to Connecticut. Route 199 was recommended so I plugged Lime Rock into the GPS and started making my way east. At first, the road out of NY was a 4 lane road but we moved along quite nicely. I crossed the Hudson river and kept making my way into Connecticut. Almost into CT, the roads started to get twisty and the scenery got nicer and nicer. Having been to Lime Rock before by car, I knew there were a lot of fun roads around so I picked a few that looked good on the GPS and just rode any road that led east. 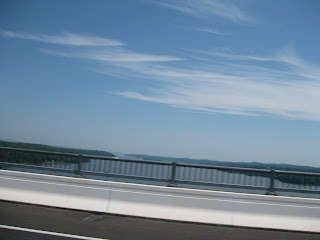 I pulled into Lime Rock Park just before noon and found the place almost empty except for a handful of race trailers. Hmmmm, I guess they loaded in already. I asked the official who was parking rigs if the West Race Car rig showed up yet. He told me that only a few were there and the IMSA Prototype Lites were loading in tomorrow. Tomorrow? Okay, let me check my schedule. It says the 6th, but then I remembered that only the American Le Mans series was loading in today and we were a day later. Crap, guess I’m early. Hmmm, what to do for a whole day? Unfortunately, my tires aren’t looking so great so I couldn’t just ride around. I asked the girl working security what was cool to see in the area and she says not much. Kent State Falls was the only thing she could recommend. Alright, I guess I’ll go check that out. On my way there, I saw a sign for a covered bridge so I made a detour so I could see the bridge. I like bridges and hand built covered bridges are usually pretty cool to see. Just past the bridge, I saw Wandering Moose Café so I decided to go in for lunch. It was a nice little family run café with some cute girls working. I ordered the day’s special which was the buffalo bleu burger. Not bad, but chatting with the girls made it better. After lunch I went out and made a few phone calls and caught up on email since I havnt had service in a few days. I talked to my parents for a while since they just got back from California and Vegas. While on the phone, a lady came out and asked where I was riding to and why I had so much gear. I explained my story and she took my card and I returned to my phone calls. She came back out a few minutes later and asked for my phone number so a reporter could call me and do an interview. Nothing will probably come of it but it was cool that she was attempting to make something happen. 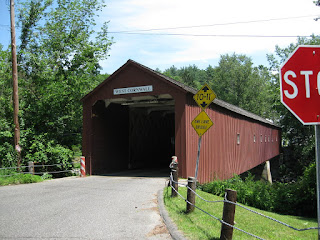 Covered Bridge 1 on the way to Wandering Moose Cafe 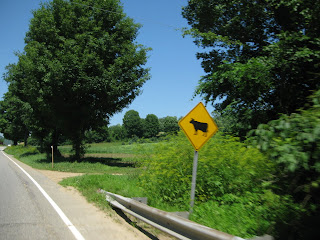 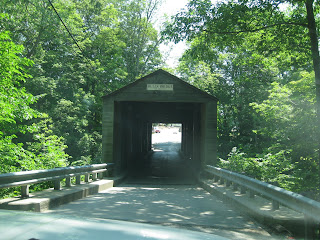 After lunch I decided to go see the Kent State Falls. When I got there, I could see the falls from the road and the park was full of people so I just got a quick picture and left. From there, I decided to just relax somewhere and update the ride report. McDonald’s it is. The closest Mickey D’s is almost a half hour away in Canaan. I ordered a smoothie and sat down with my laptop. I stayed for a few hours then got restless. Back to the track I go. I’ll just camp in the loading area for the night. By the time I got back, there were already a few fans lined up waiting to enter the track. I set up camp next to a group of people and immediately they came up over and starting asking the usual questions. Where are you headed? What with all the gear? Why a sport bike? There were a few bike guys there so we talked bikes and racing for a while. A few people had set up pop up tents so we hung out with them for the night. Just like a lot of other people I have met at the racetracks, these guys were the hardcore fans. Some of them have been going to Lime Rock for over 30 years and had some great racing stories. After a few hours, I had to hit the sack. I crawled into my sleeping bag and tried to sleep. The other campers were still up partying. These 60 year old guys were out partying me by hours. I stuck in some earplugs and drifted off. 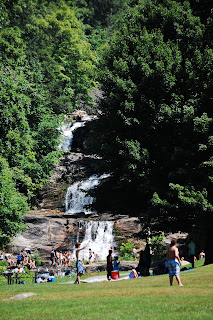 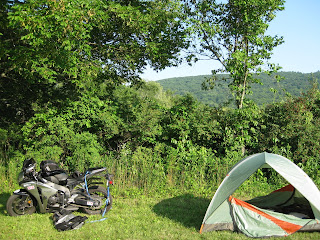 Camping at the racetrack.
Lime Rock Park
Posted by Dazn at 4:29 PM