Today is the first day we are on track with the cars. Three sessions, two of which are official practices and a qualifying at the end of the day. The weather at Lime Rock is always a guessing game. Ive never been here before where it has not rained for at least one day. Today was one of those on and off rainy days. It makes things difficult for race teams especially if you know race day will be dry. Rainy days require softer springs and dampers on the cars and typically higher down force to help add more grip. Also, rain tires are required if there is standing water. The track today was wet from the morning rain so the tire of choice are rains, but it would dry out quickly since its such a small track and the sun beats on all parts of the track. For our 10am session, I put on the rain tires, soften all the dampers and gave the car some extra rear wing angle. Jim went out for about 5 or 6 laps and the track was already developing a dry line. He also reported a misfire from the engine under acceleration. There isn’t much I can do in pit lane except for take off the rear bodywork and make sure any connectors have not come loose. I check all the ignition coil plugs, the ignition cut for the no lift shifter, voltage regulator and a few other parts but could not find a problem so I sent him back out to get track time since we only have two practices as opposed to the typical full day of testing. After a few more laps, the track was completely dry and there was no longer any standing water for Jim to drive through to cool down the rain tires. Rain tires are exceptionally soft with deep treads to provide grip in the wet, but in the dry, they quickly overheat and can start chunking off pieces of the tread so I pull him into the pits. The misfire had gotten worse too so we called it quits for the session. There were only a few minutes left anyways so no big deal. 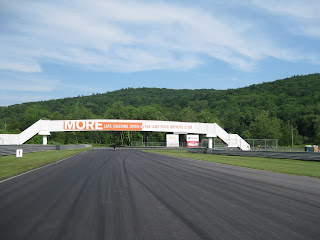 With the car back at the paddock, first thing I do is download the data from the datalogger and then change the ignition coils and check the condition of the spark plugs. I also come up with some backup plans in case the new coils are not the problem. The datalogger on his car does not log very many sensors so its difficult to tell exactly whats going on with the engine. Fuel pressure, oil pressure, engine and oil temperatures are about the extent of his system and those things all looked fine so its down to regular diagnosis. I prepped the rest of the car and got his rain tires and slicks ready to go and waited on the weather.

Our next session is at 1pm and at 12:45, its still sunny out so I throw the slicks on and change the dampers and wing back to the original dry setup. I strap Jim into the car and off he goes for our second practice session. A few laps in, he reports the same misfire issue, so I bring him into the pits and disconnect the ignition cut for the shifter and also change the ECU. I would normally only change one thing at a time but with the lack of track time, I threw everything at it so he could learn the track and perfect his driving. After I send Jim back out on track, I look at the ECU I pulled off the car and the tab that keeps the harness plug in is broken. Problem solved. Jim runs the rest of the session with Jonathon Goring as his coach. Jonathon ran the series a few years ago and did rather well. He is also an instructor at Lime Rock so he has countless laps around the track. Jim runs some pretty good times this session with the dry track and afterwards, him and Jonathon go over data and video while I prep the car for qualifying. Jim had take off one of the dive planes by hitting one of the tire walls that is just off the apex of the track so I had to do some body repair so I could bolt another dive plane one. A dive plane is a aero dynamic piece on the front of the car that adds 25-50 more pounds of down force so at a fast track like Lime Rock, its important to have these aero dynamic pieces on the car. 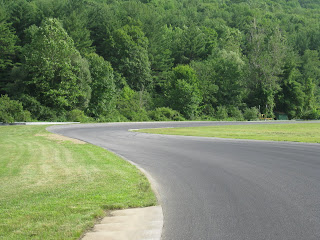 It’s supposed to be a wet qualifying so again, I have both sets of tires ready and tools ready for suspension changes. With the car mechanically ready to go, I just sit and wait for the weather. Fifteen minutes before we are to line up for the qualifying session, its still sunny and dry so I put slicks on and start pushing the car out. Then the IMSA officials come by and say the storm is supposed to come right as we start qualifying so they are mandating that we start on rain tires. We only have to do one lap on them then we can do whatever we want. Alright, push the car back and quickly change the tires. What a pain. I’m working by myself so it takes a few minutes to get all four tires changed. Problem is that the session will more than likely be dry so I bring the slicks along on our electric pit cart with the jacks and tools. We will lose a lot of qualifying time with only me changing tires so I asked one of the other teams to send over a guy when they are done with their pit stops. Most other teams will do the mandated one lap then change over to slicks before it starts raining to get a fast time in. Unfortunately, I need to wait for help so we have to do a few laps before I can change to slicks.

Qualifying starts with a sunny and dry track. Everybody but Jim does their one lap and come in to change tires. Most teams have at least 3 or 4 guys on one car so they get their cars in and out fairly quickly while Jim is still making laps. I wanted to make sure he got a quali time in on the wets before I brought him in. If the rain does start coming down, then the rest of the field will not have a chance to scrub and heat up their new slicks so hopefully Jim would have a better time on the rains. Unfortunately, the first half of the session stays dry. Jim does a few flying laps then comes in for the tire change. It is starting to sprinkle a little bit but the track is still warm and the racing line is still dry so we are going to slicks also. One of the guys from CGI comes over and give me a hand. Jim goes out on the new slicks and halfway through the track, a red flag comes out because someone put their car into a wall really hard. Qualifying is over and we never got a time in on our slicks. Fortunately Jim puts in a good enough time on the rain tires to get us P3 for the race. We could have been 2nd or pole if we had been able to go to slicks early on like everyone else. Oh well, that’s what happens when you try to race on a budget. 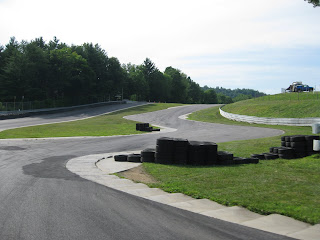 
Back at the paddock, I put the car up on the quick lifts and start prepping for the race. The prep is fairly straight forward on these cars. Make sure all fuel, water and oil lines are tight and dry. Nut and bolt the suspension then push it on the scale pad for a quick check. Then I pack all the loose tools and equipment away into the trailer and drop the sides of the canopy. Its dinner time. Again, we head into Canaan and choose one of the other three restaurants there. This time it’s another Italian place called Higby’s. We order some wings and tempura shrimp for appetizers and I get the fish and chips. The fish was less than stellar but the wings were great. The restaurant is right off main street and they were having a car show with mostly muscle cars. During our dinner, the show ends and one of the cars proceeds to do a huge burnout right in front of a cop. Then during the burnout, a minivan drives by with a kid hanging out the window with a Roman Candle and starts randomly shooting things with it. I’m not sure if he realized or not, but he was shooting the fireworks right at a cop, hahaha. The cop doesn’t react at all to either the burnout or the fireworks as though it was an everyday occurrence. Gotta love small towns. Stuffed again, we head back to the house and I shower, then pass out immediately. It was a hectic day working by myself and I am completely spent.
Posted by Dazn at 5:37 PM