The title of this post comes from a NASCAR announcer that says that phrase at the start of every race. It cracks me up because it’s so dumb. We have two races today and we have to line up for the first one at 8:30 so we are up bright and early to get to the racetrack in time to do final prep on the car and warm it up for the race. It’s a hurry up and wait kind of deal because once we are done, the car sits on the grid for half an hour while we just stand there and wait for our time on track. 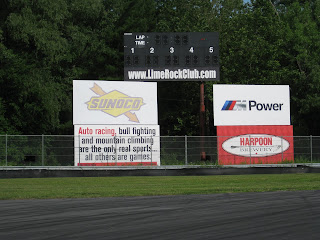 Sorry for the lack of pictures from the track, but I had to reformat the SD card on the phone and didn’t get many pictures anyways because I was so busy.

The time comes for us to race and the cars line up on track according to qualifying position. There, we finish strapping the drivers in then we wait for the announcement telling the drivers to start their engines. Once that happens, the crew members scurry off the track so the cars can begin their pace laps. When they come down towards the start finish line, the start waves the green flag and I call “Green! Green! Green!” over the radio to Jim letting him know its time to push that pedal on the right. The first lap is clean and everyone comes back around again. I always clock my drivers as they go around and Lime Rock is usually a 56 second track for Jim, but this lap its 1.15 seconds in and Jim still hasn’t come around. He finally shows up 15 seconds later, he has spun off course but has recovered. He makes a few more laps, then again, spins off course. At this poin the is a lap down to the leaders and not much hope for winning the race, but he still has a chance for a podium so Jonathon and I coach him around the track letting him know where the other competitors are in relation to him and call out the split times over the radio. Jim is able to come back to finish 3rd this race. Not too bad considering he spun twice. It wasn’t the win we were looking for but points is points.

After the race, we run the cars through post race technical inspection and pass with flying colors as usual. Now its time to prep the car for the second race. I only have a few hours before the second race but luckily there was no damage from the spins so it was just a regular checkout. The car is ready is plenty of time so I line it up early and wait again. For the second race, the cars get gridded according to the finishing position of the first race so Jim starts 3rd again.

The green flag flies and the race is on. This time, Jim keeps it on track and is putting in some good consistent times. He gets by second place to take position and the now third place car is hounding him all around the track. We tell him to look ahead and focus on the car in front since the third place car is slowly dropping back. The driver in first, Rob, is putting in consistently faster times than Jim so he keeps pulling away leaving Jim with no one around to race. Only a few laps from the end, I hear Rob’s car having difficulty shifting so I radioed in to Jim telling him to push harder because we may have a chance at the win after all. But the race is close to being over and Jim doesn’t have the time to catch back up so we finish 2nd. Not a bad day, 3rd and 2nd. Good points for the championship. As usual, we roll the car through tech and once its back in the paddock, I start prepping the car again. Normally, we would just make sure there is nothing major wrong with the car so we can be prepared to work on it once we get back to the shop and also make sure there is no major leaks that will drip all over the race trailer. But since the car is going directly to the next race in Toronto, Canada after this weekend, we need to do a full race prep for the next race weekend. We stay until 8pm finishing the car. Jake helps me with the prep so it goes quicker and he also starts to load up some of the smaller things. After the car is done, I change the oil on the motorcycle so it can be ready to ride tomorrow. With our paddock all cleaned up, we head back to get dinner. 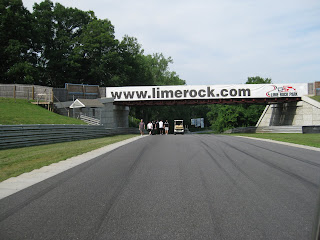 I actually made a mistake on the blog, tonight is the night that we went back to Canaan to get dinner and saw the muscle car doing a burnout and the drive by firework shooting at the cop. Last night, me and Jake had dinner by ourselves at some crappy Chinese restaurant because it was the only thing that wasn’t full or ridiculously expensive in the town on the other side of the racetrack. Sorry mom and dad, I ate Chinese food that wasn’t yours, but rest assured it was bad and your food is much much better.

At the end of the day, I had a massive thumping headache so we went to the store so I could pick up some advil before dinner. Because of that, we had a late dinner and we didn’t get back to the house until 10:30. Quick shower, then its time to hit the sack again. I was completely exhausted. Running a car alone at this level requires an intense amount of work, patience and time management so the past few days wore me out. Lime Rock is our shortest race weekend but it felt like a week had gone by.

Tomorrow, we will finish breaking down the canopy and load up the trailer so we can drop it off at a competitors house in upstate NY. The car and trailer will sit here until a few days before the Toronto race and Jake will fly into NY, pick up the rig and drive it into Canada while I ride through the rest of the northeast and meet him in Toronto.
Posted by Dazn at 6:16 PM