Since I didn’t have electricity last night, I put the phone on airplane mode. Apparently, Jake, the manager at West had called me to say he was at the track but I didn’t get it. I got my stuff together by 9 am and went down to the paddock where Jake was waiting. He had started unloading cars already so I stripped off the gear and started helping. We got the canopy up and got the rest of the equipment out. Then I assembled and leveled the scale pads and then we left to get lunch and some plywood. The “B” paddock at Lime Rock is notorious for poor landscaping. Most race paddocks are concrete or asphalt, but Lime Rock is all grass. Really really soft dirt too. The lower prototypes and formula cars usually high center on the unlevel ground so we line our work area with sheets of plywood so we can roll cars in and out and use the quick lifts. 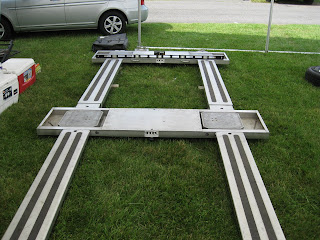 We went to a local lumber yard that didn’t seem to want our business so off to Home Depot. We pick up 7 sheets of plywood, 4 for us and 3 for another team and also some bricks for the scale pad feet. Okay, scale pads. A lot of people ask me what they are for. Its not just to get the total weight of the car. Its to get the weight of each individual corner of the car, basically the static force applied to each individual tire. This tells us the balance of the race car and how it effectively handles. On prototype or open wheel cars, you have a bar going from the lower control arm to the dampers called a pushrod(or pull rod on some) . Adjusting the length of this pushroad adjusts the ride heights. Adjusting ride heights “jacks” the weight around the car. Changing how much weight is on each corner of the car can change the handling of the car. Typically, we look at cross weights, which is the total weight of two diagonal corners, IE front right, left rear, or right rear and left front. 50% cross weights will give you a neutral handling characteristic for left and right hand corners. Anything over 50% on the left rear and right front corners favors right handers and anything under 50% typically favors left handers. A lot of other suspension parameters ultimately affects the handling of the car, but the cross weights along with the front to rear weight split will give you a basic starting step. Weight transfer has a large effect on handling and the ultimate goal is the make the most of your tires without overloading them. A 50% weight split is generic for most tracks, but since Lime Rock is predominately right handers, we want close to 51% cross.

Supplies picked up, we have lunch at Three Brothers Café. I was told their Greek menu was excellent so I tried the gyro platter. Eh, so so. The lamb and beef meet looked like a patty that had been sliced. It definitely didn’t come off the large meat cone. After lunch, we went back to the track and finished setting up the paddock. I pushed the car up on the scale pad to do a quick check since things can possibly change from transporting. Jim Garrett, my driver for the season shows up and we catch up a bit. I worked with Jim several years ago in the same series, same team and same car so it’s nothing new for us. We know how each other work so it’s a good driver/crew relationship with him. Once we got the paddock set up, I worked on the bike for a little while. Got the chain cleaned very well and lubed it up. Then we left for a shower and dinner. Its difficult to find places to stay in Lime Rock since its such a small town. Most teams either travel almost an hour away to find a hotel in a bigger city or just suck it up and pay for an expensive bed and breakfast near the track. We got a bed and breakfast one mile away. The house is nice but the room is small and has two twin beds. Twin beds are fine for me, but Jake is like 6’5 so he struggled with the small beds. Also, my bed creaked loudly every time I moved so I would wake him up all the time. 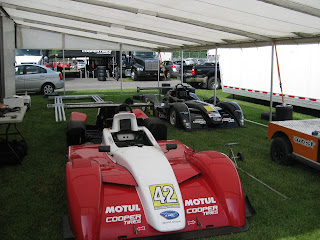 For dinner, we went to Canaan where I had been yesterday at the McDonalds. There were only three choices so we went with Roma, an Italian restaurant. The servings were absolutely massive and I couldn’t finish my dinner which is extremely rare. The calzone was literally a large pizza folded in half and that was on top of a huge salad and some bruschetta. During dinner, I got a text from my brother saying that a good family friend George had passed away the day before. George has known our family ever since we moved to Georgia. He basically watched my brother and I grow up. He was very good with his hands and knew a lot about fixing appliances, plumbing and general handyman type things so when we had a problem at our restaurant, apartment or house, George was always there to help. Every year, he would give us a turkey for Thanksgiving and a ham and fruitcake for Christmas. He will be missed greatly by our family and everyone who knew him. Rest in Peace my friend.
Posted by Dazn at 5:24 PM