Early wake up call today so I can beat traffic and follow Owen up to New Market where I will split off to head west. The rain from last night continued on into the morning. It was just dark skies at first but as I got geared up, the rain started. Threw on the rain gear and got ready to go. Jennifer made me a sandwich to go which was awesome! Thank you Owen and Jennifer for the hospitality! You guys are awesome and I hope to see you guys again!

The rain wasn’t too bad, just light rain up until we got to New Market. The skies remained dark and threatened rain the rest of the way through Ontario. I eventually got a few hours west of Toronto then jumped on the 401. I stopped at a service station to take off the rain gear as it was starting to warm up. There was a huge pack of Harley riders there and they too were doing the rain gear dance. I filled up then started to make my way to Sarnia where I would cross into Michigan. 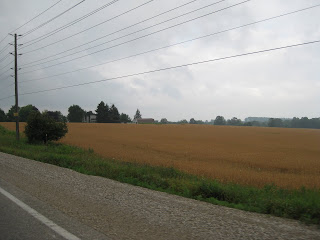 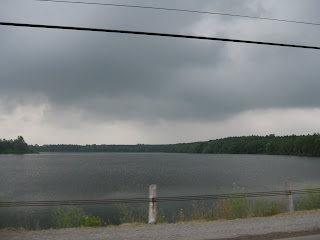 It threatened rain the whole ride through Ontario.


The skies cleared as I got into Sarnia. At the crossing, I had to pull over and pull out some money for the toll. Then got in line at the bridge. The line started well before the bridge so I ended up waiting for almost an hour in the heat. The wind was strong on the bridge so it was tiring keeping the bike balanced. A few times I just shut the bike off and put down the kickstand. Once I got over the peak of the bridge, I just left it off and coasted downhill. Every time the radiator fan kicks on, it blows hot 225F air onto my already scorching black leathers. I got in line behind an older couple on a Harley from Ontario. Near the booths, I pulled up next to them and talked a little bit. They were heading to California. I wished them safe travels and got back behind. It was so hot I eventually took off my helmet and gloves while in line and just pushed the bike as we creeped slowly towards the border. 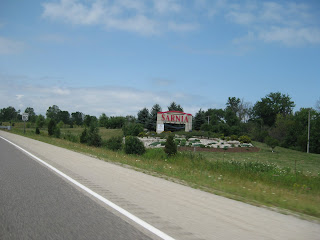 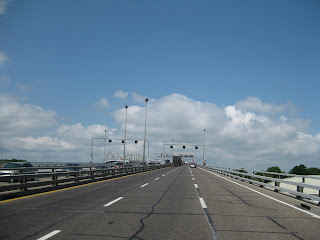 The line waiting for me at the border 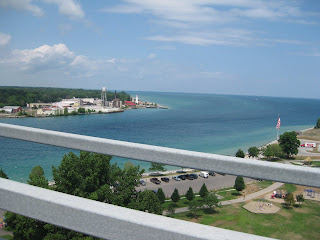 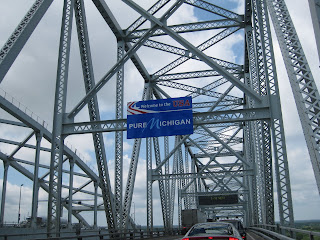 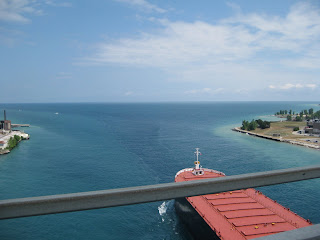 This cargo ship blew its fog horn underneath the bridge and surprised the crap out of me. funny to think a massive ship was able to sneak up on me.


When it was the Harley couples turn at the booth, they were there for only a minute then they were on the way. Cool, I figured I would get the same treatment too since we were both just motorcycle riders traveling. Not so much. At the booth, they asked the usual questions but the border patrol wouldn’t believe that I was just doing a cross country ride for charity. Something about my passport saying I was born in Brazil really confused them too. An Asian guy, from Brazil, on a sport bike completely loaded down seemed curious to them, haha. I was at the booth for a good ten minutes answering a barrage of questions when he finally gave me a ticket to go to secondary inspection. Ok, whatever, he was a huge prick but he’s just doing his job I guess. He got out of his booth and followed me to the parking lot at secondary. He told me to get off and pull the key out so I started to pull off my gloves. Apparently he was really impatient because he decided he wanted to pull the key out himself. He reached in and I tried to stop him and tell him to let me do it since the Honda key is soft and bends easily. Ask me how I know. Well, the jackass yanks it out sideways and bends it almost 90 degrees. Great, thanks asshole. I take the key back from him and start trying to bend it back when he yells at me to get my gear off and go inside. I give him the “eat shit and die” look then throw the key at his face and say, “Fine, you fix it!”

Normally, I have no problem with authority as long as they are just doing their job. But I had enough of this guy. The bastard couldn’t wait 10 seconds for me to pull off my gloves. It took all I had not to lay into him and let him know just how much of a prick he was. I have a spare key with me, but now I had to get another one made so I have a spare again.

Inside customs, I get called to the counter. I had already cooled off at this point because I had to wait for about 20 minutes inside. I ask the guy at the counter how he’s doing and he says, “Whats going on?”

“Not much, the guy at the booth sent me in here..”

“Whats going on?” This time, the guy sounds perturbed.

Not sure why he’s getting an attitude with me, I guess I would hate that job too but he doesn’t need to lose his cool.

“The officer outside sent me in here.”

“No, why are you here? Why are you crossing, where did you come from!”

I gave him the story and he gives me a card to fill out. It asks if I’m carrying any food so I tell him I had the sandwich that Jennifer made me and if that applies since it was just one sandwich. He tells me to just check number 2. Well, there is no number two. Its all letters. So I ask him, “ You mean B?”

What a freakin attitude on this guy. Im gonna assume he’s mentally retarded and means B, but B says meats and the sandwich has no meat. So I said, “The sandwich is all veggie so Im gonna check A since it says vegetables.”

Apparently this guy wants to know why my passport says I was born in Brazil too. Ummm, because that’s where I was born smart guy. He asks where my parents are from. “Taiwan.”

He types on his computer for a few minutes, then puts on some gloves. “I’m gonna go search your vehicle now, stay right here.”

I sit there for about 30 minutes. I cant see my bike and him taking it apart because a van is in the way. He comes back in and says, “Just to let you know, I took off the ratchet straps, looked through your bag with the tent in it, took apart the tail bag, but left your saddlebags and looked through them. You put it all back together. Have a good day.”

Good day my ass. I go outside and my stuff is everywhere. On a table, on the ground, my clothes and sleeping bag are laying on the dirty asphalt. This is ridiculous, I wish these guys had a bit more respect for people. I take my time and put everything back in the appropriate places while the original guy from the booth watches. I give him the evil eye as often as I can. Once Im done, I take off while trying to keep my mouth shut. I really wanted to give him a piece of my mind about the key, but I’m so annoyed at this point I figured I should just leave before I got myself into trouble. BTW, when he gave me the key back, it looked like a freaking wet noodle. Its complete junk now. Those pricks should be paying for a new key.

I jump on the interstate and get off at the first gas station to fill up on cheap gas. A tank in Canada costs me $20, in the states, its $12-$13. At this point, Im still really annoyed about the key. Back on the highway, I look down at the odometer and it says 20,012. Damn, I missed the 19,999 and 20,000 picture. Stupid border patrol, made me miss a milestone. I know border crossings can be a even bigger hassle that what I experienced, so I'll just chalk that one up to an interesting experience and leave it at that. 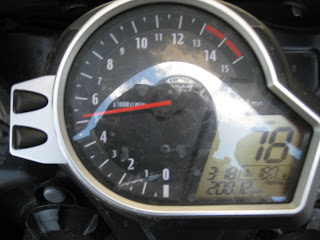 
Not wanting to deal with Detroit traffic, I just keep cruising down the interstate. Just past Detroit, I had to get off the bike as I was starting to get really tired. I sit down for a while at a gas station and catch up on emails. Its nice to use the phone again without having to worry about a massive bill at the end of the month. Im not looking forward to seeing that bill. I remembered I still had the sandwich so I inhaled that with an energy drink. I had no idea cucumber and cheese sandwiches could be so delicious. No picture since I ate the whole thing in like three bites. 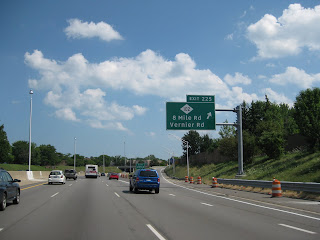 Thats all I can think about every time some one says anything about 8 miles now.

Several hours behind now, I decided to just keep on the interstate until I got into Ohio. The plan was to camp near Oregon, or Toledo. I found a KOA but it was $35. A hotel room in that area is $35 so I opted for a room with air conditioning and internet. The internet only worked if I was outside, but I guess it was something. It was pretty slow too so I only got a few things done before it got dark. I had a couple hour ride into Indianopolis tomorrow but I wanted to get an early start since I had a tire change to do. The Pilot Road 2s are not at the wear bar just yet, I think it could have made it to Minnesota where I had originally planned to change them, but I didn’t want to take the chance so I had a friend order me up a new set and arrange a service in Indy while I was still in Canada. I used to work with Ross at a race team and he later became a dealer for Western Powersports so he got me a good deal on the tires and also some brake pads. Thinking everything was gravy and taken care of, I set the alarm for 6am and went to bed. 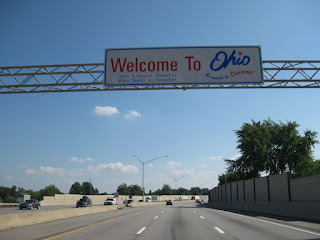 Toronto to Toledo, what a difference a day on the road makes.

My ride so far.

Note - Im having trouble loading pics at this hotel. Ill have to add them later. Places shouldnt claim they have WiFi if it sucks. especially if you have to pay extra for it. I will be complaining in the morning.....
Posted by Dazn at 8:28 PM