I felt like crap this morning after a short sleep and a long previous day. Got out of the room at 9:30 and hit the gas station to fill up the bike and get a energy drink. Last night I looked up a few roads that seemed interesting so I was going to check it out today. I planned to stay in the area again tonight but not being too impressed, I decided to head into the Catskill Mountains in New York. First, there were a few roads that I hoped would redeem northeastern PA. I took 209 up and crossed into New Jersey and actually found a couple of really fun roads. I never imagined such good roads to be in Jersey. Then I made my way back west following the Delaware river. 97 and 6 ended up being decent roads with good views. From there, I rode 590 down towards Lake something or other in PA. 590 was super tight and twisty but the road condition was what you would expect from a small county road in the northeast. Lots of broken uneven asphalt with piles of gravel in the corners. It made for a few hairy moments since it was hard to see the gravel piles and potholes in the shade. After almost racking myself a few times I had to start sitting way back in the seat away from the tank. 590 turned into 507 which I enjoyed thoroughly, great pavement and great views of the lake. I cant remember the road that led me back into East Stroudsburg but it was great too, I ll have to look it up later. 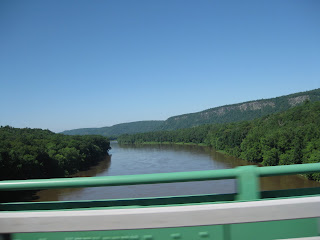 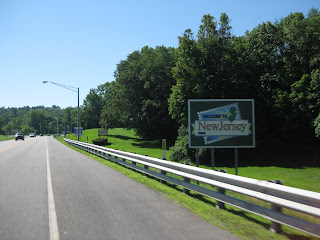 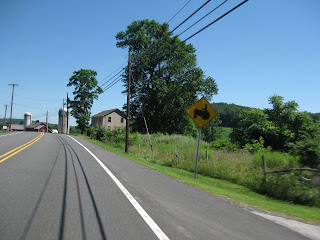 Not the sign I was expecting to see in New Jersey. 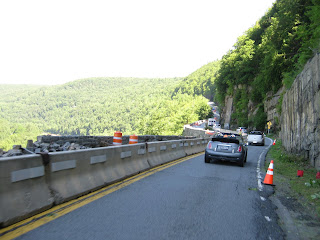 Construction on the side of a mountain, must be fun for those guys. Definitely don't envy them.


Back in the Delaware Water Gap area, I realized the loop I rode took over 4 hours. Yikes, Im back almost two hours later than I thought I would be. I looked up the quickest way to the Catskills so I could get there at a decent time. Back up 209 all the way up to Catskill. After half an hour on 209, I decided it wasn’t what I wanted to do. I remembered hearing about a road in NY labeled 55 so I looked it up on the map and I pretty much had to do part of the same loop I already did. Crap, I should have just done the loop the other way around and linked up with 55 that way. Oh well, live and learn. 55 turned out to be an awesome road. No traffic, good pavement and lots of fun sweepers. 55 took me all the way into the Catskill Park then I stopped at a little place called Eureka café for a late lunch/early dinner. It was a nice café/country store with a decent sized menu but I was eyeing the pizza that just came out of the oven. I ordered a slice of the pepperoni and sausage and asked about a strange looking white pizza. Apparently it was a new recipe that no one had tried yet. Alright, Ill be a guinea pig so I got a slice of the feta, riccotta, mozz, artichoke hearts, spinach and sundried tomatoes pizza. All the café employees just stared at me as I bit into it waiting for my reaction. It was actually really good and once I gave the thumbs up, they all had a slice. I wanted another slice but it was already 5pm and I still have a ways to go. 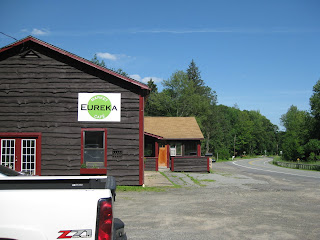 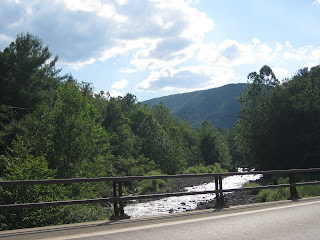 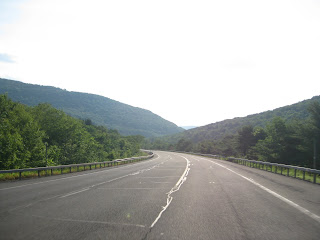 The Catskills were much nicer than I anticipated. I was pleased by how nice everything looked and how clean it seemed. There were no trash on the side of the roads, the road conditions were exceptional and everyone I rode by waved. It kind of reminded me of the southern part of the Appalachian but much greener and livelier somehow. There were a lot of mini waterfalls by the side of the road too which I liked. There were people camped all along the creek going through CR42 or Peekamoose I think it was called. Hmmm, it’s a little early to stop and camp but it looked inviting. I kept picking random mountain roads and before I knew it, it was 7pm. Time to setup camp. At a gas station, I asked a few locals about campgrounds they all recommended the Phoenica campground just a few miles up. Cool, I ll ride in and get a spot. There was no one at the office so I rode through the grounds and picked out a spot I wanted by the creek. Back at the office, still no one there. I’ll just ride down to the reservoir to check it out then come back. The reservoir was much further than I though at 30 miles away. I saw a sign for a campground off some small backroad so I decided to check it out. I road almost another 20 miles without seeing anything but some really nice houses and more mini waterfalls. I thought about stealth camping at a few spots but there was actually a decent amount of traffic for a small road. Wonder where they were all coming from? 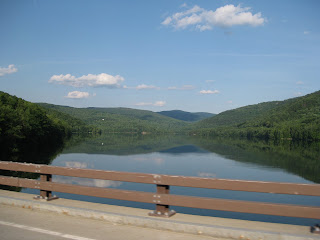 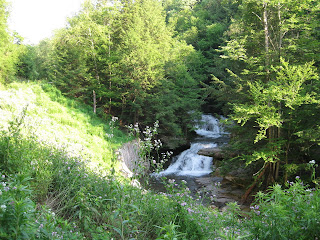 Random streams all over the place. 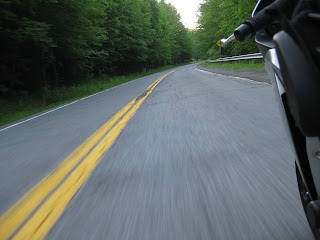 Jess enjoying the roads, eating up the tires way too prematurely.

Its been more than an hour now so I went back to Phoenicia Campground and still no one there. I decided to just pitch the tent and pay in the morning. Just past the office, I saw a few people outside their trailers so I asked about the owners. Apparently they live in a house deeper in the campground and were never at the office. What good is that? The permanent residents called up the owners for me and they said to just pick any spot. Well, how much is it? Okay, let me call them back. $35 a night. !!!! What? For this place? With no electrical outlets or internet or anything? Forget it, Ill find another place. I hate that I wasted so much time there. There was no cell service so I rode back in town and found a state park listing nearby. Most state and national parks you have to call Reserve America to get a site and it always takes forever since you have to listen to so much pre-recorded junk before you even speak to anyone. 15 minutes later I finally get someone on the phone. $20 for Woodland Valley, deal. Much more reasonable and its only 5 miles away. 5 long miles through a tiny rough and gravelly road. I wasn’t even sure if I was going the right direction. Close to the end of the road, I start seeing tents and smelling campfires, good. Got to the office and guess what, no one there either. Note on the door said to just pick a spot and register in the morning. Whatever, Im ready to set up and rest. At least there was a note with instructions. I find a spot near the creek, pitch the tent then walk out to the large creek and lay down on a large rock for a while. That feels great on the back and the sound of the water was already putting me to sleep. The short day ended up being a long day. I worry more and more everyday about my tires, they are definitely not making Minnesota now, I’ll have to change them in Indianapolis, if Im lucky. Ive grossly underestimated my mileage for the first part of the trip. Tomorrow, I should have been at just over 3k miles and I’m already sitting at 4k. The tires are just over half worn so 11k miles on one set was a pipe dream. Ill be lucky to get 8k. It was supposed to be 8k miles to Minneapolis, but with the extra miles Ive been putting on just cruising around the nice roads I think Ill hit 10k before Minnesota. That means my total for the trip might be closer to 30k miles if I keep riding like this. That also means Ill need almost 4 sets of tires. Man, that’s way out of my budget…..I guess I need to cut back on the extra miles or Alaska may be a pipe dream as well.

I need to be in Lakeville, CT early afternoon tomorrow to start work. Its too bad that I need to work while I am riding but at least people will get to see exactly what I do for a living. So many of my family members and friends really have no experience with racing so they can’t really envision what it is I do at the racetrack day to day so hopefully this will give people a little more insight into the working part of my life. Strangely, it feels great to be in a tent again. Its been a few days since Ive camped and I definitely enjoy it much more than a dirty flea bag motel or someone’s couch. 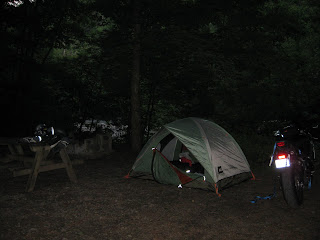 Too expensive at $27 after fees. Out of state fees are ridiculous. The Northeast is too expensive.
Posted by Dazn at 1:28 PM