I didn’t want to wake up today. My body just kept saying, need more sleep. It wasn’t until 11 am that I finally opened my eyes and got up. Not having too far to go and with work coming up soon, I felt like it was worth it. Cesar and I went for lunch before I hit the road. Tilted Kilt was Cesars choice, its kind of like a modern day Irish Hooters but with better food. During lunch, I played phone tag with my boss and tried to figure out an arrangement to get me to Mid Ohio Sportscar Course for the next race. I was supposed to have a flight out on Aug. 3rd but since he waited so long, they were getting expensive. Now I would have to drive 13 hours back to Ohio for work. Then on Sunday, I had to prep the car for the Road America in Wisconsin, then drive 13 hours back to Minneapolis, then pick up the bike first thing Monday morning to hit the road and make it to Fargo, ND. This is NOT going to be fun.

After lunch I slowly packed up and then we went back to the shop so I could get my bike. We took some pics and I had to get some pictures of Cesar riding the unicycle in the race shop. The unicycle cracks me up. Then I hit the road. It was ridiculously hot leaving Chicago in traffic with the sun beating down on me. Once out of the city, it was a lot better but still too hot in leathers. I saw some windmills for the first time this trip. They kind of surprised me, I wasn’t expecting to see them until I got further out west. I crossed into Wisconsin late into the afternoon. Before I left, I had looked up some twisty roads so I went straight for them. I was craving some curves. Its been since New York and the Adironbacks since Ive used the sides of the tires. 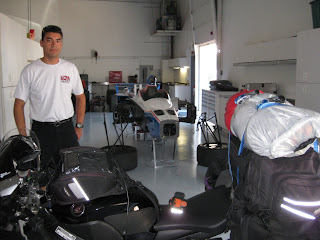 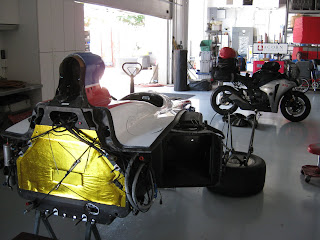 How many other people gets a pic of their loaded sportbike next to a Indy Car? 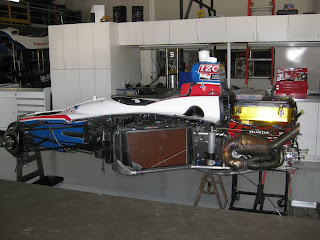 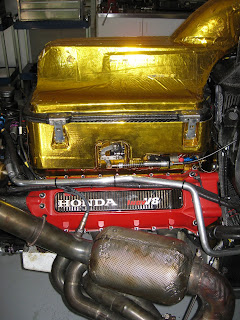 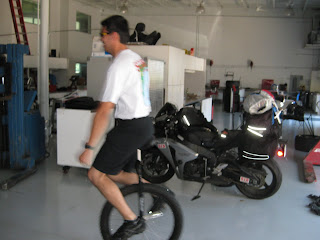 The unicycle cracks me up. 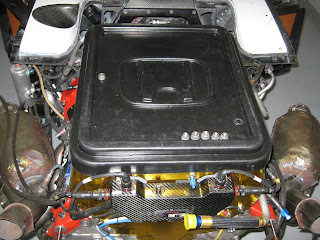 Honda airbox cover.
Heres the story behind it, engine goes boom. Honda says its because a mechanic dropped a bolt or nut into the trumpets. So they come out with an airbox cover and then stamp a giant Honda symbol on it. gotta love it. 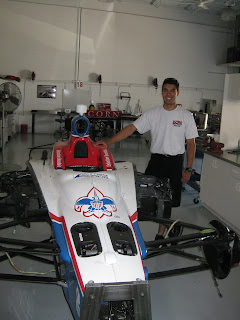 Cesar and his machine. 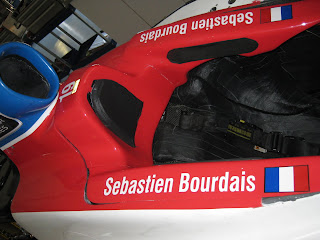 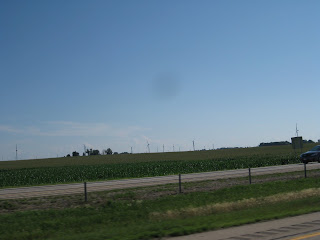 first windmills of the trip 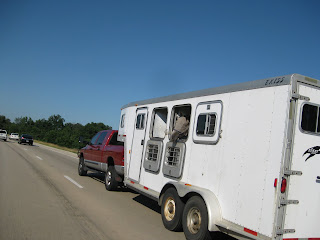 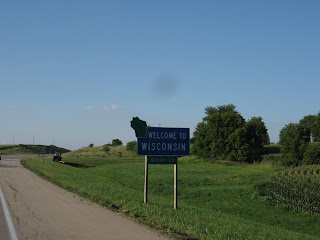 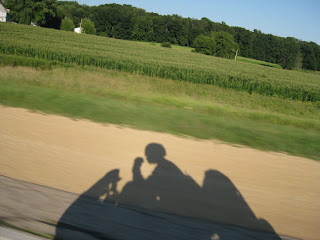 my shout out to Andy, FLArider1 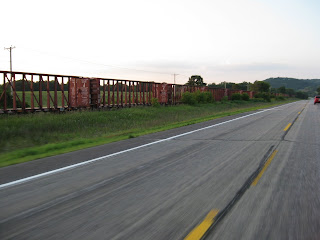 The roads were not anything crazy, but it was Deal’s Gap compared to Illinois, Indiana, Iowa, Missouri, Michigan and Ontario. I got maybe halfway through the first twisty road then decided to call it a night. Looked around for some campgrounds and found a place for $20. It was pretty sketchy, but it was a place to sleep. It was in Sauk City right by the river so the bugs were bad. One somehow got into my tent and bit me a few times then woke me up at 2am and I spent an hour trying to kill it. So annoying and it was hot at night still. I hate sleeping when its hot. I might have to get a cheap room tomorrow night.
Posted by Dazn at 8:22 PM