Tuesday morning I got up extra early so I could be at Budget rental as soon as they opened at 7:30. I have a 14 hour drive ahead of me today so I wanted an early start. The taxi I called didn’t show up after 20 minutes, so I called another company. They finally showed up after 20 minutes. Already behind. Traffic was ridiculous and the driver said he knew of a “better way.” This route took almost 30 minutes and added a few extra miles. I watched the ticker count up to $36 and made several snide comments about his route. The driver also got lost, I don’t think he had any idea where he was going, he kept looking at his map at every turn. When we finally get to Budget, I gave him $15 and told him that’s all he was getting. He tried to argue but I wasn’t having it. Im already 1.5 hours behind and I wasn’t about to pay this guy to drive around the city looking for an address that he should have known. If your new to taxi cab driving or new to the city, get a GPS or just follow the directions I gave you….

The owner of the Budget rental car was hilarious. Seemed like he would be a cool guy to just hang out with. Finally got on the road at 10am and started the 13 or 14 hour drive to Mid Ohio. I was planning on being near Chicago around 2pm but with the delay, I got there right at rush hour so I tried to go around but still got caught in traffic. Any roads in the 150 mile radius of Chicago was a jam. After I got in Indiana, there were storms the whole way to Ohio. The GPS wanted me to take a bunch of backroads. I tried them for an hour, but it was too much stop and go so I jumped on the toll roads. Cost almost $20, but was able to drive 85 the whole way to Ohio. I finally got to Mid-Ohio at midnight and shared a hotel room with Jake. Long day and I was happy to put my head on a pillow. 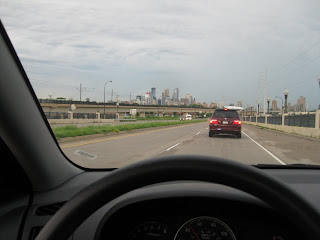 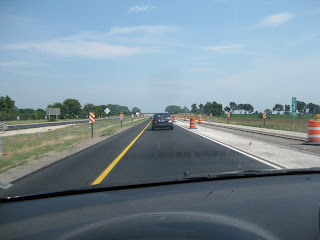 Wed - Early wake up call today to get to the track and load in. We were all set up by noon and went into town to get lunch. Went to Home Depot and bought some more plywood and bricks for the paddock. We are in the grass again. We were done fairly early today so we went and got dinner and called it a night. I don’t have a session on track until 4 pm tomorrow so I get to sleep in. I fell asleep around 8pm while waiting for Jake to get out of the shower.

Thursday - Jim, my driver called me at 10am and asked if I could be ready to leave at 11am. I had no idea where I was when I answered the phone. Huh? Be where? Oh, yeah, sure…
With nothing to do until 4, I just hung around and pestered the other teams. Our session today is a 40 minute practice session. We were a few seconds off the pace and slower than we were at a recent test here. Jim complained the car was really darty so I made a few quick damper adjustments on pit lane to try and help but knew the problem lied in the alignment which would have to wait until later.
Back in the paddock, I re adjusted the camber and toe on the car for more stability.

Friday - today is the busy day. We have three session on track today. Practice, qualifying and race. Our practice session went fairly well. The car is much better than yesterday so the times came down significantly. Unfortunately not enough as the Canadians were still faster. For qualifying we made some down force adjustments and sent Jim out with low fuel. He was planning on doing just a few laps but the times were still too slow for a decent position so he stayed out for most of the session. I pumped the car out after the session and there was only ½ a gallon left.
The first race was late in the day. It started at 6 pm. Just a few laps in, Jim spun in the carousel leading onto the front straight and got tagged by another car. The hit damaged the right rear corner and of the car and sheared the valve stem on the rim and flattened the tire so Jim was unable to continue. The car that hit him had far worse damage but didn’t have a flat tire so he continued on to a 2nd place finish.
It took a long time for the track workers to get the car back to me. I drove around the paddock looking for the car for a while. When it got back, there was only wheel and suspension damage. Easy stuff. The bodywork is the most time consuming. I put the car in the air and disassembled the corner and made sure there were no further damage in the drive train. A snap ring on the tripod was broken so I took the axle apart and replaced it but everything looked fine. I put on a few of the a-arms and called it a night. Our race the next day is at 6:30pm again so I had plenty of time to finish the car tomorrow.

Since I dont have any pictures from this race weeked, here are some videos of the race cars I work on.

Saturday - We got to the track at 8am today so I could finish assembling the right rear corner and then re-align the car. Then we hung out for a while and started to tear down the canopy and clean up the paddock. The weather forecast called for rain so we wanted to get the canopy down before it got wet. It started to sprinkle as we were taking it down so we made record time in breakdown. As we got things put away, the shit hit the fan. We out an EZ up over the car and continued cleaning. Now we are an hour away from race time and the rain isn’t letting up. So I wait until the last second and start putting rain tires on the car. Unfortunately the EZ up is barely wide enough for the car so I’m getting wet putting the tires on. When the car is done, Im completely soaked head to toe. I hate rain races. We get down to grid and the rain finally quits. Im already soaked at this point so I don’t even really care if it keeps raining or not.

We have a dry race but the track is soaked so we stay on the rain tires for the race. Jim goes off in the braking zone and gets stuck in the gravel trap for a few laps before a tow truck can get him out. Just no traction today. A few laps down now, we can only hope for more attrition. Unfortunately, everyone manages to stay on track so we finish at the back of the pack. Not the best weekend for us.
With the car back at the paddock, we continue to pack up the trailer. More rain comes so Jake and I just continue packing in the rain. Everything is wet and we just don’t care anymore. At some point, you cant get any wetter and your not gonna get any dryer so you just have to have fun with it. We shove everything into the trailer and hop in the rental car to have some fun. A few doughnuts and e-brake drifts later, we head out of the track to get some dry clothes at the hotel.

Jim’s driver coach this weekend was Tommy Byrne was an exceptional driver who like so many others, never got the big break. He reserved a dinner for us at a nice restaurant and we ate like kings. I had the Kobe steak, which wasn’t as good as I imagined but still good enough for me. We got back to the hotel late, but all we had to do tomorrow was strap down a few things then hit the road.

Sunday - We got to the track at 9am and finished packing, then I hit the road. Tommy had given jake and I a signed copy of his book. Aweosome, I wont be burning pages from this book to start my fires. Sorry Peter jenkins, your book is great, but its not a signed copy so I can always buy another copy. Another long drive back to Minneapolis today. In Chicago I hit traffic again. I was stuck for at least an hour. Ive been through here a few times in the past couple weeks and I still havnt learned my lesson to just completely avoid the area. I will never complain about traffic, construction and tolls in Atlanta ever again. Chicago is the worst. I got through Chicago before the storms came again. The Mid west storms are intense and makes driving slow. I kept expecting a funnel to drop down any minute but just ridiculous amounts of rain. It finally cleared up halfway through Wisconsin. I got half an hour away from Minneapolis and called it a night. Im exhausted and ready for bed. Early morning tomorrow to drop off the rental car and pick up the bike from Honda Town. 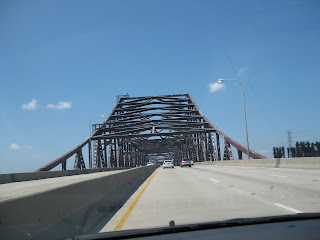