Honda Town doesn’t open until 9am so I planned to get to the rental car company at 8:30. Traffic kept me from getting there until 9. This time, the taxi ride was short and inexpensive the way it should have been the first time. I get to Honda Town and pay my bill. I think they gave me a discounted rate so thank you Honda Town! These guys are definitely good people, they are what dealerships should be. I hate that I am having to pay dealerships to work on the bike since it costs me lots of money for things I should be doing myself. But with my work schedule it’s a necessity so Im putting up with it. I go to the bike and it looks like they cleaned it up! I guess I cant say I have bugs from 49 states when I get back to Atlanta now. Too bad. I put on a couple of Honda Town stickers and head out. I am planning on putting on some miles today so the next week will be easier as I have a lot of miles to cover in a short time. 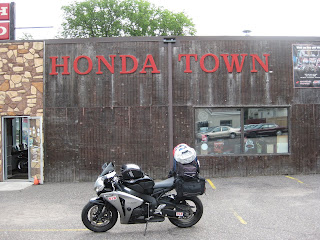 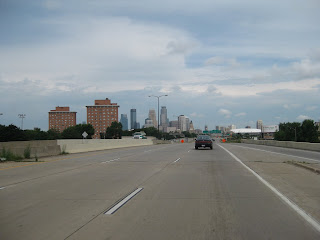 I jump on the interstate to get out of town and into Fargo, ND. At my first stop, I examine the tires and they are not looking so good. Im praying they make it to Seattle at this point. I need to get off the interstate and conserve the tires. Past Fargo, I start taking backroads towards the Badlands National Park. I can make it close to Rapid City today if I don’t waste any time. The wind is absolutely brutal today. There are times where I am making right hand turns but leaning the bike to the left. Its completely unpredictable as to how hard it will blow and what direction it comes from at times. I’m able to keep it in my own lane but its tough. Its mentally and physically draining. I don’t take any pictures since I need both hands on the bars and all my concentration to keep it in a straight line. At some points, I can see massive amounts of dust and leaves blowing through the air. The next few days will be just like this so I prepare myself for the worst. 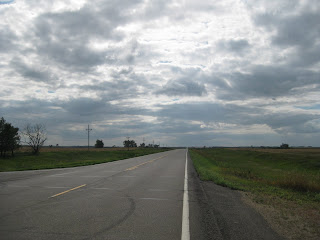 
A few hours past Fargo, Im at half tank of fuel and I start looking for gas stations. I plug it into the GPS and go to the first one on the list. Closed. Okay, next one. Non-existent. Okay… thanks GPS. Next one… out of gas…..crap, Im getting pretty low now. Next one in the tiny town of Judd. Closed and has been for a long time since the price was still $2. I guess I cant rely on the GPS. Now, I only have half a gallon left and I am about 15-20 miles from empty. I pour in my reserve bottle which is actually my fuel for the camping stove. This should get me another 10 miles. The next closest gas station is 20 miles away. I call them to make sure they exist, are open and indeed have gas. Jackpot, finally. I start making my way there on these tiny backroads and as I crest the hill, I see water. I know the area has experienced some flooding lately so Im not surprised to see a bit of water on the road. As I get closer, I realized its just not a foot or so of water. The road is now a lake and its closed. A sign points left for a detour, but theres nothing there. A long string of four letter words poured out of my mouth. I stop at the closure and look at the GPS again. Not another gas station for at least 30 miles and I have less than 15 miles left on my tank. I shut the bike off and sit down for a while. Whats next? I am in the middle of nowhere in North Dakota with 15 miles worth of fuel and no gas stations anywhere close. Im screwed. The closest town is Judd which consists of about 5 buildings and one of which is the closed down gas station. Its my only option. If all else fails, I will just pop up the tent there and figure it out tomorrow. The wind is still relentless and every time I stop to look at my GPS, I have to use almost all my leg strength to keep the bike upright. Im so tired of this. I creep slowly back to Judd at a snails pace conserving every last drop of fuel I have. I get into town with just .1 of a gallon left. There is a bar open so I step inside. There are only two patrons inside and I get the staredown. This is definitely not my environment. Asian kid in full leathers in a small town bar in the middle of nowhere North Dakota. Luckily, these guys don’t want to shoot, rob or kill me. They tell me the county sheriff lives close by and that he would probably be able to help me out. I get back on the bike and creep my way towards the sheriffs house. Just a quarter of a mile up the road, the bike shuts down. Out of gas…. It cranks back up and I make it another quarter of a mile then shuts down again. Man…. It restarts but barely runs but every time I go to take off it bogs down. With the wind as strong as it is, every time it bogs down I almost get blown over. I get off and start pushing. The sheriff’s house isn’t far away now so I figured I would just push it the rest of the way there. As Im trudging along fighting to keep the bike and myself upright with the wind a man out in his yard comes up to me and I tell him whats going on. He says he has just a little bit of gas in his garage. Yes! I push it into his driveway and he digs around in his garage for a fuel jug. He gives me just under a gallon and I thank him profusely and give him $10. We chat for a bit since he also rides and goes to Sturgis yearly. This guy is awesome. I tell him about my ride for charity and he tries to give me the $10 back but I refuse. I would have given him much more for that gallon of fuel. We talk bikes for a while and he gives me some recommendations for Sturgis and also directions to the closest OPEN gas station. Its 30 miles away and with that gallon of gas, I should get there with about 10 miles to spare. 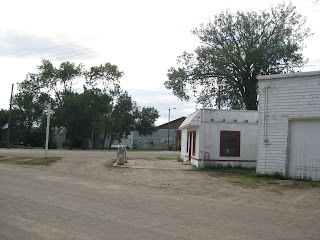 The small town of Judd and its lonely gas station. 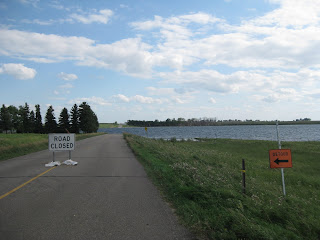 Ummmm, where's the road?
and where is this supposed detour??? 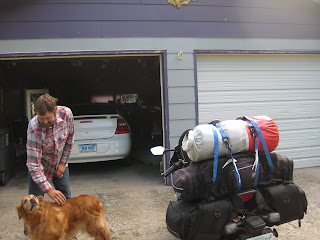 The random guy who saved me. 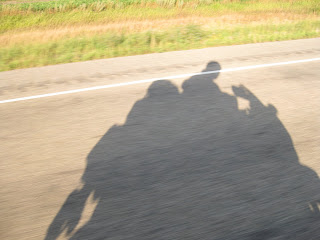 Back on the road!

I thank him again and make my way towards fuel. Finally get to a fuel station and fill up, then re-fill my fuel bottle for the stove. I got lucky this time. Lesson learned, stay close to the interstates in North Dakota. There are way too many gas stations that should not be on the GPS and with the multiple road closures, its not even definite that you can even get to the open ones. 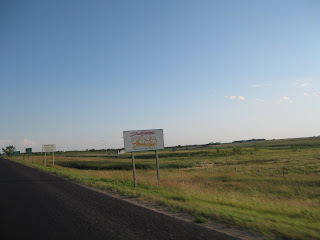 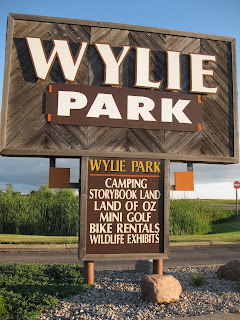 With the fuel issues, I didn’t get near as far as I wanted to today. Im only a couple hundred miles out of Fargo and I hoped to be near the Badlands. I get one more hour south into Aberdeen, South Dakota and decide to call it a night. There is only one campground here in town and its in the Wylie Amusement Park. Its surprisingly cheap at $17 a night and it has electricity and water at each site. There are also multiple clean bathrooms. This is the nicest campground ive been to in a long time. I unpack and break out the laptop and am surprised to find a wireless connection! Sweet! I check out google maps and re think my strategy for the week. I look up some bigger towns that might have motorcycle shops in case I need to get a rear tire before I arrive in Seattle. This is going to be close. I will probably be pulling up to my brothers apartment on cords.