I got up bright and early today. The sun was barely up as I packed everything up. I wanted to get into the Badlands early so I could ride the loop road and still have time to visit Mount Rushmore and ride some of the Black Hills. The plan was to camp in the Badlands then ride Black hills tomorrow, but as of now, I still have an appointment at a dealership in Seattle. I thought they were open on Monday, but apparently not so I need to be there mid afternoon on Sunday now and I had a lot of ground to cover.

After leaving Wylie Amusement park, I went to a gas station to top off. I don’t want to run out of gas ever again. At the gas station, several people asked if I was going to Sturgis. Is that going on this week? I guess I planned a bad time to be in the area. One guy mentioned that SR 12 was closed due to flooding. Crap, I was actually planning on taking that route. He gave me some directions that would take me around the closure and off I went. This area of South Dakota is pretty flat and boring. It was cool so to be able to see so much land at one time though. And the sky just never seemed to end. 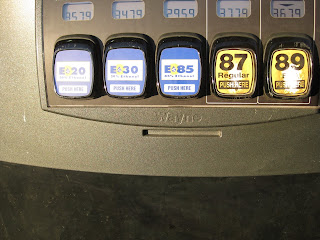 Lots of ethanol in this area. 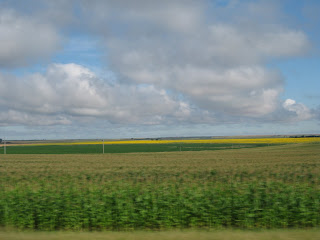 The bright yellow sunflowers provide a stark contrast to the rest of the topography. 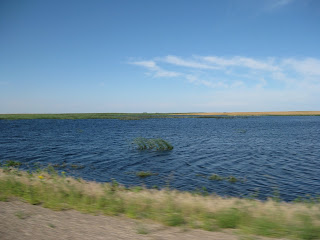 There used to be farmland under that water. 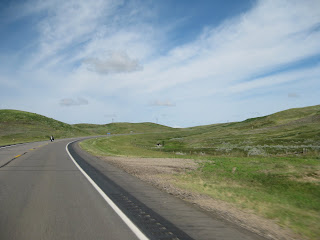 Finally a change of scenery. 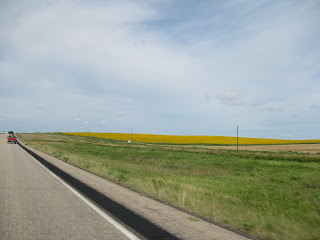 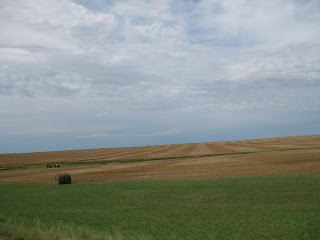 Back to flat nothing

Somehow I managed to avoid all the rainstorms while on the way to Rapid City. They were all close enough for me too see the rain falling, but it never fell on me. At some points I was sure I would get wet, but I managed to avoid most of it. I stopped often for gas, every 2 galllons used, I filled up. My route took me through Pierre, SD. Its such a small strange town. Its strange how some cities become the capitols of states when there are larger and better cities in the state. Im reminded of Tallahasee and Raleigh specifically. I got into Wall, SD at noon, way earlier than I anticipated. I went into town and walked around Wall Drug. The only reason I went is because for the past 2 hours, there were signs tell me to, so I did. I guess their marketing strategy worked. It was a total tourist trap so I just got lunch and left. The meal was crappy and expensive. 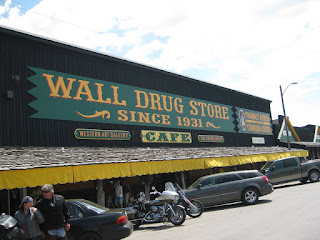 The biggest tourist trap ever. 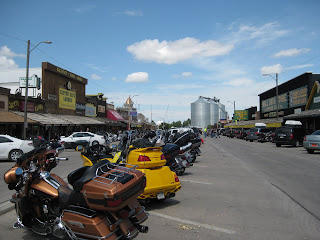 Its time for the Badlands. The Harley presence was ridiculous. I couldn’t go anywhere without hearing the ridiculously loud pipes and being held up by pack of 20 or so Harleys going 10 under the speed limit. Im not to Sturgis yet and Im already so annoyed by them.

At the front gate, I was pulling up to the line then the a pack or 10 or so Harleys decided to jump in front of me from the other line. I gave every one of them the finger. What a bunch of dicks. I waited forever while these guys dug out their wallets and paid. I pulled up, waved my annual pass and went on my way. Pulled off at the first overlook to get out my DSLR camera when a large pack of Harleys pulled up and blocked the roadway. All of them left their bikes running while they walked around. The noise was unbearable. For gods sake, just shut off your bike!!! They were probably afraid it wouldn’t start back up again…..

After a few quick pics, I got back on the loop road hoping to avoid being stuck behind the large pack. Nope, no such luck. It wasn’t the same pack at the overlook though, it was yet another massive pack of Harleys. This is going to get old really really quick. 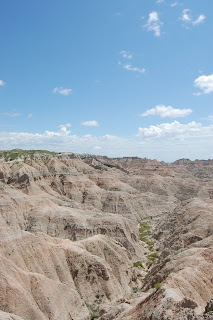 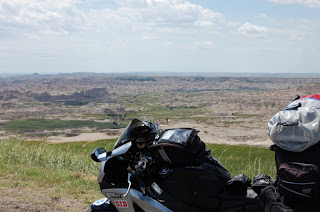 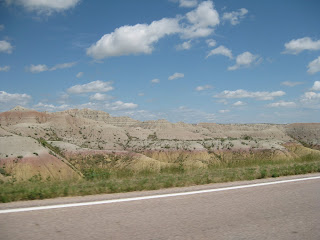 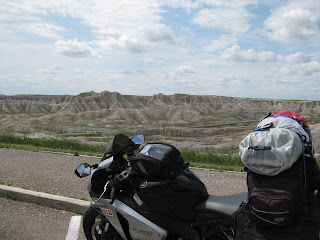 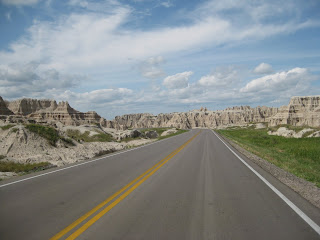 The Badlands are awesome, but the thing is, after you have been to a few overlooks, the rest are pretty much the same. There was one in particular that I really enjoyed. It was the Yellow Mounds. These had a brilliant shade of yellow and purple in the rock. I didn’t think there would be so much color here. 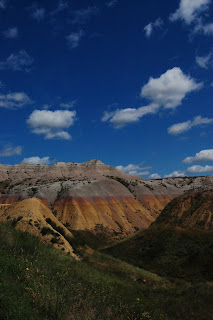 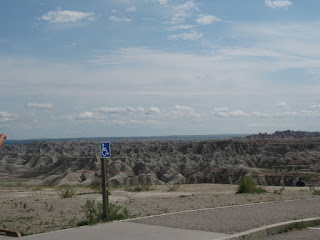 About halfway through the loop road, I saw a non harley pulled off the road so I decided to stop and make sure he was okay. It was a Suzuki GS 500. When I stopped, I smiled and said, “Im so happy to see something other than a Harley!”

He laughed and we talked for a bit. He was from Toronto out on a road trip for a few weeks. He has been I the area before last year and was just revisiting and was thinking of going out to the Grand Canyon. We chatted for a while then went our separate ways. Cool guy, would have been nice to ride around with him for a bit but we were headed separate directions after the Badlands.

I toured the rest of the Badlands then took a break at the lodge near the end of the road. I saw the rider from Toronto again and we chatted again and snapped a pic. When he left, he turned his iPhone to video mode and stuck it inside his helmet to film. I laughed as he shut his visor and took off. Ive never thought of that one before and I thought I had some crazy ideas. 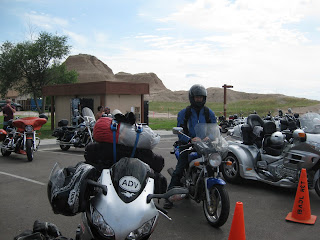 Badlands done, it was time to head towards Mount Rushmore. I jumped back on the I-90 west. On the way to Rushmore, it started to rain so I checked the radar and it was a fairly large storm. I thought about turning around and going to Sturgis just to see what it was about, but I decided to do Rushmore anyways. I really didn’t want to put up with the parking lot of Harley Davidsons that is Sturgis. Everyone says I have to do it just because I am there, but you know what? I don’t. If it wasn’t Bike week, I would have gone, but Im in no mood to idle behind a massive loud pack of Harleys through a strip of parked Harleys have of which were trailered there.

Rain gear dance done, I went towards Rushmore and Keystone. It rained pretty hard for a few miles but slowed to a trickle after a while. I pulled into the Rushmore parking lot just after it quit raining. There were still massive dark clouds all around, but it was sunny at Mt. Rushmore. I paid my fee and went to the site. it’s a lot smaller that I originally envisioned, but still neat to see. I imagined hanging off the rock face with an air hammer and chisel in the freezing cold. Yup, not for me. Watched the movie to kill some time and walked around the memorial. My friend Clint, who rode with me through Deal’s Gap and Kentucky, had a relative that worked on the monument so I decided to go find his name on the memorial. The list of workers was a lot smaller that I thought it would be so it was quick and easy to find the name. I snapped a pic and texted it to him. Thought it might be neat for him. 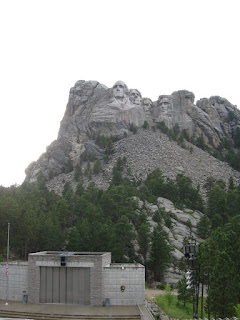 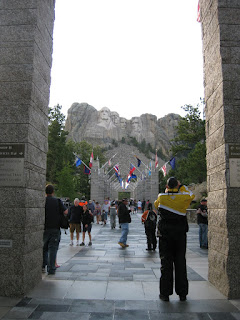 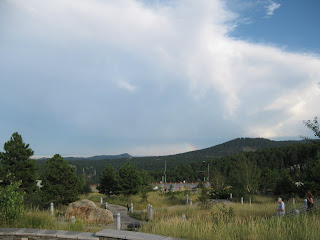 After Rushmore, the sky seemed to clear a bit so I decided to ride 16A. This is one of the twistiest roads in the US so of course I had to hit it. Its too bad the roads were wet and crowded with slow moving Harleys. Halfway through, it started to rain again. Oncoming Harleys were going wide into my lane and the ones that were supposd to be in my lane were creeping at 10 mph and slower through the rain. Come on guys, if I go any slower, Im gonna fall over. Ive got to come back one day when it isn’t Sturgis week. The Black Hills are absolutely awesome and gorgeous, but this is just the wrong time of year to be here. Next time, Ill have to make sure Im not here for Bike Week.

After 16a, I wanted to visit Cave Winds National Park so I hurriedly made my way there. The bike traffic was horrendous though so it took way longer than it should have. The rain only made things slower. These guys are just afraid to ride in the rain. Every corner they come, they would almost park the bike and negotiate it almost upright. Bikes are made to lean people, let it lean. Your tires are grooved for a reason, it will be okay. Hell, Ive dragged knees in the rain, its not a problem as long as your smooth. 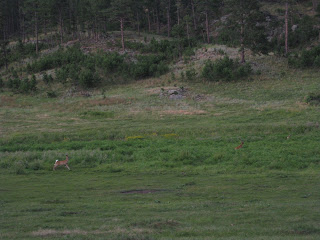 Lots of elk on the road.

I finally get out of the traffic and start making my way to Cave Wind. Its only drizzling now but the skies are really dark and it looks bad. At least it keeps the other bikes off the road. Getting into the national park, there is almost no traffic but I have to keep it slow because there are deer everywhere. On several occassions, I came around a corner only to have a small group of deer in the middle of the road. If your not looking carefully for them, they almost blend into the background. Arrived at Cave Wind at 8pm but the tours had already ended. Damn! Freaking Harleys. They don’t start back until 8:40 am and I would be long gone by then. Man, I cant believe being stuck behind all that Harley traffic made me miss out on the tour. Im so annoyed…. 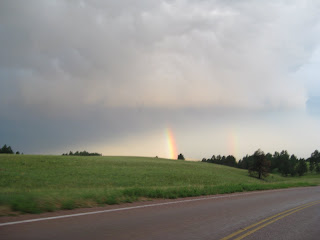 Hard to tell from the pictures, but this was the most vivid rainbow Ive ever seen.

Its getting late now and I needed to find a place to camp. Just before the tour entrance, there was a campground on Elk Mountain so I decided to check it out. Its only $12 and its almost empty. Perfect. The grounds are small but neat so I pick a spot in the back away from everyone else and set up. Then I went back to the office and put $15 in the drop box and took some firewood. Yet again, Jess gets packed up with firewood. Back at the campsite, I start making the fire. There is no kindling around to use so I burn my national park map and a few other random receipts and such to start the fire. No go, wood is wet. I get out my book and tear out a few pages and finally get a small fire going. Then it starts raining again and my fire goes out. Few more pages and I get a small fire going again, I stack the rest of the wood above the small fire to keep it sheltered from the rain and soon, I had a roaring fire going. Sweet. The rain ends and it starts getting chilly fast. The clouds finally move on and stars begin to peak out. Beautiful, this is what I like. Campsite all to myself, stars, chilly night and a nice warm fire to sit beside and read. I read my book until midnight then crawled into my sleeping bag. My body is sore from the ride today so I fell asleep so fast I don’t even remember zipping up the bag.