Just when you think your safe

Today was another one of those 2 hour rides that I somehow turned into an 8 hour ordeal. I was planning on riding straight into Minneapolis to drop the bike off at HondaTown for service. When I crossed into Minneapolis, I saw some twisty roads on the Gps so I figured why not. I have plenty of time. That road led to another, then another , then another. Then I realized it was past 1pm and I was 2 hours south of Minneapolis now. Oops. Taking backroads northbound, the weather started looking a bit gloomy. Dark skies ahead. It didn’t look like rain, yet. I rode for a few more hours hoping it would just pass but as I started getting close to Minneapolis, it started to look really bad. I crossed back into Wisconsin and pretty much as soon as I did, I started to see some really menacing clouds. They were dark, low and moving quickly. I was in the middle of nowhere with no place to hide. If the shit hit’s the fan then I would just have to ride through it. I thought about putting on the rain gear on the side of the road, but I thought I would take my chances today. As I was riding north, there were places where blue skies peeked through so I thought I could just make it through. Wrong…. 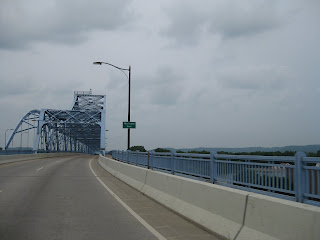 At this point, Ive lost track of how many times Ive crossed the Mississippi River. 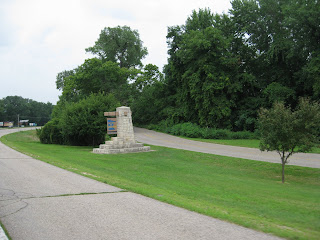 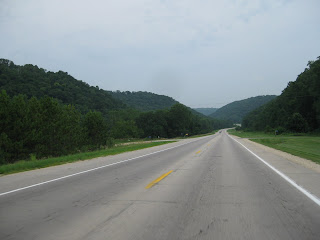 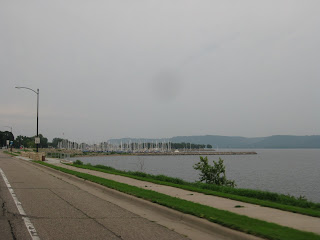 It was so dark and gloomy none of my quick P and S shots turned out well. 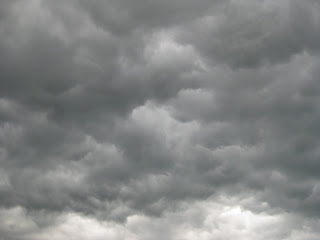 Not the kind of skies you want to see on a bike.

The skies unleashed with massive droplets of water, then those droplets of water turned into balls of hail. I don’t care about riding in rain, or even a little hail, but when the stones get bigger, its hard to steer the bike. After about 10 minutes of riding in this, I see a building that looked like a greenhouse nursery. I pull in and it’s a nursery/café. Cool, I guess I’ll have some food while I wait for the storm to pass. I put the rain covers on the bags and head inside tracking water and dirt into this pristine café. Sorry guys. The café was closed, but they offered to make me a sandwich anyways. All they had available was cold food so I took the chicken salad sandwich and cucumber salad. I also got a brewed ginger ale. It ended up being a fantastic meal. I watched the rain and hail pummel the bike for a while and hoped that the wind wouldn’t blow the bike over. The weather channel showed a fairly large storm over me but it seemed to be moving quickly. It was two large cells side by side and when one passed, I decided to take my chances and try to ride around the next one. It was already 4pm and the dealership closes at 6 and Im over an hour away. I gear up and head out. Only light rain now and as I head northwest, the skies start to clean and I see blue skies again. Yay! I’m in the clear! Then the road curves and takes me right back into the storm. Doh! I hate it when that happens. No hail this time tough, just heavy rain and high winds. At one point, I thought I had a flat tire because I couldn’t get the bike to turn at all. It took a minute for me to realize it was just the wind.

The second storm didn’t last too long, I caught the tail end of it. It produced some pretty crazy looking clouds. For some reason, these Midwest storms really fascinate me. They are so much more intense here. 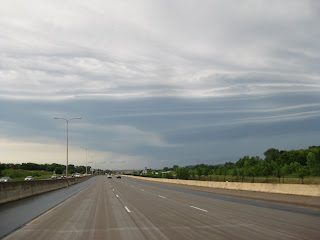 Tail end of a storm creating some cool looking clouds.

I get to Honda Town with time to spare and meet the crew. It’s a family owned place with 3 generations working there. Really cool place, they have an awesome collection of bikes in the back. I also saw the new Honda CBR250 for the first time, I thought it was the new VFR from a distance. it’s a sharp looking bike and I would take it over the ninja 250 any day. I chatted with the owner of Honda Town (I cant remember his name now, its been too long, I need to write this stuff down as it happens) for a while and some of the mechanics. Everyone is extremely nice and were attentive to the requests I made for the service. I needed to get some spares made too because of the border patrol so they are taking care of that for me too. So refreshing to come to a place like this after a bad experience at the last Honda dealership in Indy. They let me leave most of my gear there also so I would have to lug it around for the next week. I started to look up taxi’s to take me to the closest hotel when one of the mechanics offered me a ride. It was just a mile up the road to the Days Inn. It was expensive at $80 but it is close to the rental car company I would need to get to tomorrow and taxis are expensive. The way I see it, I would have spent the difference on a further cheap hotel on a taxi ride anyways. Plus, the Days Inn had a bar inside and a beer would be nice tonight. 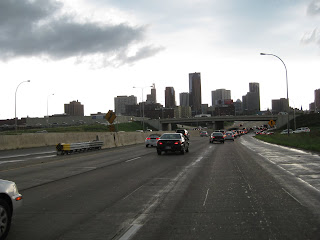 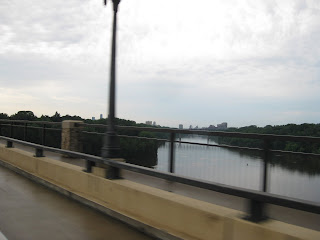 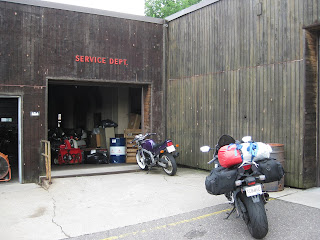 
Checked in, dried off and got ready for dinner. The restaurant in the hotel was a bar and grill type place so when I opened up the menu and saw a Vietnamese page on the menu, I was a little startled and hesitant. I think Ill just have chicken fingers. Dinner was mediocre but I didn’t care, I didn’t have to go far to get it. Went back to the room and passed out. Its going to be a long day tomorrow.