Early morning to finish working on the bikes and get on the road. We work on finding a way to get Clint’s KLR up in the air to remove his tires. After several attempts, we get it onto a milk crate and stable enough to work on. Now my bike. Ive had the bike in the air before in Indianapolis without the proper race stands so I have a good idea what I need to do. The swingarm spools went up on jackstands and I got a jack underneath the front and got the bike stable. I pulled the rear axle out of the wheel and was sliding the chain off the sprockets when I see the bike starting to tip over. I dropped everything in my hand and grabbed the bike. But it was too late and too heavy. The bike fell over with an astounding thud leaving me standing there in total disbelief. What just happened. I immediately try to lift the bike up as fuel was pouring out but I couldn’t get on the right side of it to lever it up. Clint comes over and moves stuff out of the way and pushes while I pull. A jackstand is stuck underneath the swingarm so I had to lift up the back and pull the stand over before the bike will go upright. We get the bike upright and then I remembered the rear wheel has the axle out of it. I jack the back of the bike up and get the wheel off and examine the rear brake caliper and bracket. The rotor and spacers are chewed up but not in the important areas. After the back was supported, I checked out the front and there was some pretty good damage. The nose has several large cracks, the headlight housing stay was broken and the tabs and pins holding the side fairings and ram air ducts were broken off. Everything was hanging loosely. This is going to be expensive to fix. New nose, new headlight assembly, new ram air ducts…..I made sure there was no further major damage to the bike and continued working on the getting it back up in the air to pull of the wheels. Nothing I can do about it now but to just suck it up and keep working. Clint has a friend just down the street who has a workshop. Ted is a former AMA racer, well seasoned mechanic and is taking care of a couple of racecars so at least I have a place to disassemble the bike and fab up some mounts and things to hopefully hold the bike together for the remainder of the trip. 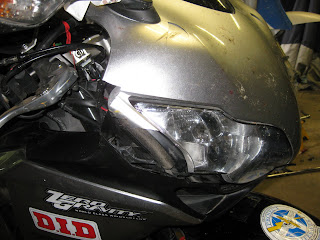 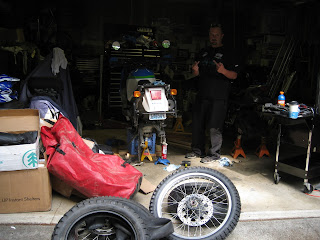 We get the tires off both bikes and loaded into Clints truck. Head down to Cycle Gear to drop them off and meet his brother for lunch. I cant remember the name of the restaurant now but I had the best sandwich I’ve had in years. After lunch, we go back to Cycle Gear and they are still working on the tires. This is taking forever. I guess we are not leaving today. This will put us a full day behind now. After a long wait, we finally get our wheels back and they charged me $70 to change the tires! Unbelievable! Normally its only $20 a wheel, I argued and complained about the price but they told me it’s a Cycle Gear standard. Not so, Ive paid $20 at Cycle Gears several times. Whatever, I complained some more to be sure they were aware of my extreme dissatisfactions with their slow service and high prices then we left. The wheels and tires went on easily and now its time to disassemble the bike again to cobble it back together. We ride over to Ted’s place and I start the long arduous process of removing all the fairings and the headlight housing. Its worse than I think and there are a lot of things I wont be able to repair correctly. This is where the plastic epoxy and duct tape comes in. Im still angry at the fact that Ive been riding for so long and have come so far to only have the bike fall over on stands. If it wasn’t for the jack that the bike fell on, it might not have been so bad. But that’s just what ifs…..


While working on the bike, I talk to Ted about his racing career and found out a lot of extremely interesting things. I’ll have to look up the dates and everything again, but I remember years ago watching a documentary of a aircraft carrier that was on fire and experienced several explosions. There was a massive fire on deck and missiles and bombs mounted to planes on the deck were going off after being enveloped in flames. I vividly remember watching the people on film pushing planes off the deck hoping to stop the string of explosions. The video plainly shows the concussions as the bombs were going off. It was an insane ordeal. It turns out, Ted was there. He was in a helicopter and when one of the planes exploded, a piece of a turbine flew just past his head and lodged itself into his craft just inches above him. He showed me the piece of the turbine. Here I am, standing in someone’s workshop in Puyallup, Washington, full of self pity because my motorcycle fell off the stands and I was piecing it back together the day, no night before leaving for Alaska which is a big enough trip in its own right, holding a amazing piece of history and staring at the man that it almost killed. Wow, I didn’t even know what to say. All of a sudden, my problems meant absolutely nothing. I’ll never forget holding that piece of turbine in my hand….

Feeling painfully simple and self centered, I continue working on the bike and make a few brackets to hold together the headlight housing and a spacer to zip tie through to hold the ram air ducts onto the side fairing and nose. Then I slather some parts in epoxy and duct tape together the rest. Its pretty bad off but it seems to be somewhat sturdy. Hopefully it lasts the rest of the trip. The Alaskan Highway is a rough ride so Im expecting another side of road repair at some point. Its almost 11pm before I finish cobbling the bike together. I thank Ted profusely for letting me use his workshop and Clint and I head out. No way we are leaving today so we decide to go camping. Probably not the best idea at this point but Clint says he has an awesome spot near Mt. Rainier only an hour away. A trip to the store to buy some water and a 6 pack of Alaskan Amber Ale and we were on the way, in the dark. 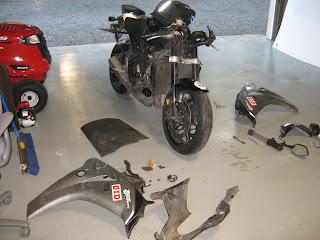 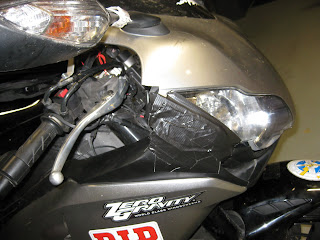 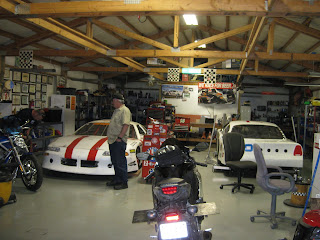 Heading out of town, it quickly turns into country roads. Then we head into the national forest near Mt. Rainier and onto a forest service road. At first, its just a dirt and gravel road. Then it gets pretty gnarly after a few turnoffs. Im glad Clint has been here dozens of time before because I cant see where we are going. We are driving through bushes and trees and the road isn’t even visible from where I’m sitting. The road is full of massive holes and rain bars. The truck bounces around the pot holes and when going through the rain bars, all I see is the ground, then sky. Ground then sky. At a few points, just a foot or two to my right, is a cliff. A cliff into darkness and no trees to stop the truck should we go sliding then rolling off the edge. Im glad its dark and I cant really see whats going on because Im pretty sure it would have freaked me out. There were a few times I had an unnerving feelings welling up deep within my stomach and I had visions of us tumbling down the side of the mountain, lost for days, weeks before anyone found us. Ive done some crazy things, but this is up there. Its just a new kind of experience. After miles of intense(at least for me) four wheeling we get to the summit and Clint’s campsite.
Getting out, I look up at the stars. “Holy Shit! I have never in my life seen so many stars.”

“Just wait until your eyes adjust.”

A few minutes later. “Holy Shit! There are even more stars!”

Shooting stars pass by constantly leaving long colorful streaks in the dark sky dotted with hundreds, no thousands of stars. The dust of the Milky Way galaxy shines as bright as a star normally viewed from places Ive been. Satellites and planes go idly by while I strain my neck to keep staring. It takes a few minutes for me to realize how cold I am. Before we left, I asked Clint if it would be cold and he comments that I should bring a sweater. I grabbed a sweatshirt just before we left. I threw it on realizing that it wouldn’t be enough. I look at Clint and he’s putting on a thick down jacket. “What the hell?”

“Oh,that’s all you brought? I said bring a sweater.”

“This is a sweater! I didn’t know you meant a down jacket or something.”

“Sorry, I guess Im used to people who are used to camping in cold weather.”

“Yeah dude, Im from Atlanta, there’s no such thing as cold.”

We get a big fire going and I warm up. My neck is already hurting from staring up at the stars. Just amazing. Clint points out Mt. Rainier just the next ridge over. I didn’t even realize that was there, but looking at it now, how did I miss it? Even at night, its so prominent. You can see the darkness of the mountain and the brightness of the snow on top.

“Just wait until you see it in the morning.”

I set up my tent just behind the fire and face the door to Mt. Rainier so I could peak out first thing in the morning at it. We have a couple of beers then call it a night. I use my sleeping bag liner for the first time and Im so very happy I bought one. I went to bed thinking about the day and how terrible it started and how magnificently it ended. It’s hard to believe it all happened in the same day. I shut my eyes and the stars are emblazoned onto the back of my eyelids. Im excited to see Mt. Rainier up close in the morning, but I had no idea what I was in for.


PS. Heres the Wiki article on the USS Forrestal.