Lots of things to be done today. I needed to mount new tires, change the oil, clean and lube the chain, change spark plugs and change the air filter. Of course, I got a late start. The plan is to do the work at my friend Clint’s place. Clint joined me for a few days in the southeast riding through the Tail of the Dragon and through Kentucky. Now that the racing season is over for him, he returned home to Puyallup, Washington and was planning on joining me on the trip to Alaska. At a gas station near my destination, I pulled over to refuel and find the address to Gerbing heated clothing where I had an appointment to meet the Marketing manager to talk about sponsorship for my ride into the Great White North. Seeing that Clint had called, I checked my message and found that he needed a part for his KLR from just north of Seattle. If I had received the call an hour ago, I would have been able to pick up the part for him. He needed to leave soon to beat the traffic through Seattle to get his part so I cancelled my appointment to ride back to Seattle with him. At his place, I stripped myself of riding gear and hopped in his truck to go back the direction from which I just came. Traffic had already started and was fairly slow moving all the way back up. We picked up the part he needed which was just a small oil seal for his sidecase. He found an oil leak on his way back from a ride around the northwest just the day before and needed to fix the leak before the long trip up to Alaska. We picked up the part and a spare and started back down south. Traffic was pretty much a stand still so we pulled off and got dinner at a Red Robin. Well, this day has not gone according to plan.

Back at Clint’s place, I decide to do everything but the tires tonight as we needed to have them mounted at the local Cycle gear. Clint worked on his oil seal while I changed the spark plugs and air filter. This necessitated quite a bit of removal of parts off the Honda. While removing the fuel tank, I found that the fuel line had come loose and was barely clipped on. Lucky this never came off completely. It could have resulted in quite a nice fireball of fuel, aluminum, magnesium and flesh. The air filter was completely clogged like I have never seen before. There were hundreds of bees, bugs and butterflies lodged in the paper element. Several large stones were also in the airbox and I had to actually vacuum it all out. Filter and plugs changed, I reassembled it all making sure the fuel line was plugged in nice and tight. Oil was changed and everything went remarkably well. I was confident that tomorrow we would leave by mid afternoon on our Alaskan adventure. 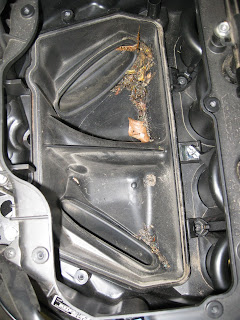 The airbox after the 1st round of cleaning. 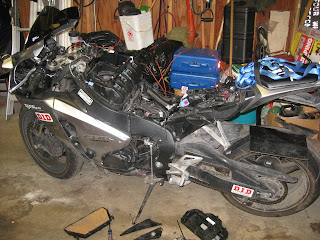 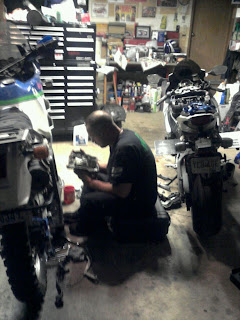 Clint having fun with the oil seal.


Clints job however, was not as easy. The oil seal goes into the case no problem, but there were several obstacles keeping the side case from going on easily flipping the seal inside out on almost every attempt. It was hard to tell whether or not the seal actually went on as it should. The side case was put on and pulled off dozens of times and finally after a few hours, Clint was somewhat satisfied. We had a couple of beers then cleaned up and went to bed. I crashed on the couch for the night.
Posted by Dazn at 8:59 PM