After coffee, we got on the road by 8:30am. After such great scenery yesterday, the day was a bit of a disappointment. There was nothing to see and nothing to do. We went through small towns spread out by distances of 40-50 miles on the Caribou Highway or 97. The town names ranged from 70 Mile house up to 150 Mile House.

Somewhere along the way, I believe it was Quesnel during a gas stop, I decided that I couldn’t take these monotonous roads anymore without some sort of entertainment. I was told there was a Radioshack in town where I could purchase headphones but after a couple of laps around town, I never found it so I went into some form of budget store where I found a tiny selection of headphones. The only kind that would even have a chance of fitting underneath my helmet were a set of bright pink JVC earbuds. Not having any other choice, I paid the $17 for the earbuds and went outside to show off my new purchase to Clint. I think he was quite impressed. Back on the road we just kept chugging along. Nothing to see, nothing to do. 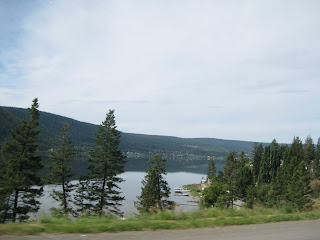 We get to Prince George and decide to stop for lunch and re-stock some supplies. There is a Wal-Mart in town so we eat at the McDonalds inside and buy some food. A Big Mac was actually good. I picked up a couple packs of Ramen, rice, spam and other dried goods. I also finally got a pack of ratchet straps expecting to break one or two on the AlCan and a set of new $10 headphones to replace the pink ones. At the checkout line, a couple on a Harley was behind us and Clint struck up a conversation with them while I argued with the cashier about the total price of the rice, spam and tripod that I bought. Somehow, my total ended up being over $100. I asked the cashier if Spam was really that expensive in Canada. Apparently the headphones had some kind of error and was ringing up to be $50. After it was fixed, Clint told me that the Harley rider had offered us a place to crash for the night in Prince George. It was still too early to stop and apparently the wife didn’t seem too agreeable to the offer.

It was a challenge trying to find a place for everything. The rain had chased us all day so I thought about putting on the rain gear to make room but could bear the thought of being hot and stuffy when it didn’t rain. Clint had found some cheap tripods at Wal-mart. They were only maybe 10 inches long and were around $10 so I had to buy one. After we found a home for all of our new purchases, we went on our way to put in some more miles. Leaving town, I spot a bank and decide that we should probably exchange a little bit of money. Inside the bank, I exchanged $200 US and got $192 back in Canadian. Talked with the cute bank teller for a bit while Clint finishes his transaction. I walk over to him and notices that he only got $188 and I make a comment that the exchange rate must be different on this side of the bank. Clint made some remark about how it was because I had flirted with my teller. The woman exchanging Clint’s money said that there was a handling fee that she forgot to charge me. Ooops, I glanced over at my teller sheepishly and said, “ I mean yeah,…..I got $188 too. Uh….” She laughed and I cursed myself for opening my mouth.

Couple of hours and a few hundred miles later, we stop again at near McLeod Lake and start looking for campgrounds. We were recommended the Whiskers Point Provincial Park by some locals but it was close and it was still early There was a pass about 2 hours ahead so we thought we would probably want to camp well before that to stay on lower elevations. There was one more provincial park past Whiskers Point but when we came up to the park, Clint pulled in and I made no complaints. We drove around for a while looking for a spot. All the spots on the water were taken, which I didn’t mind since I could see clouds of bugs flying around the water. We pick a spot and Clint goes off looking for the registration box. As Im unpacking, a park ranger comes up to me and asks for the money and if we need any wood. Umm….Clint has my money and he went looking for a registration box.

Registration done, we walked over to the lake and watched the already setting sun finish its descent over the lake. We took some pictures and went back to camp. Fire ablaze we had dinner by headlamp. I cant remember what I had now, but I think it was just a pack of Ramen noodles. Yeah, that must be right. Clint made soup and used some of my rice as filler. It had gotten chilly tonight by the time I crawled into the sleeping bag. Starting to make up some mileage now, maybe we cant actually get back on track by the time we hit Fairbanks. 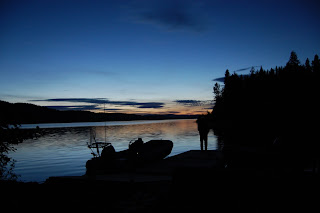 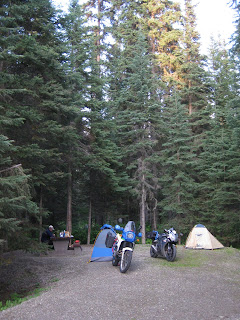 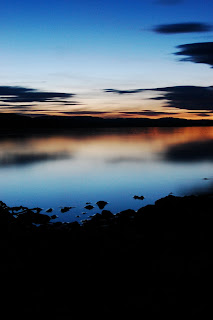