First thing I did this morning was check the thermometer on my tank bag. It read 45 degrees inside my tent. I took it outside and put it on the bike to see what it was like outside. It felt cold. We had a fire this morning for the first time of the trip while we had coffee. We were packed up and on the road by 9:30. It wasn’t long before we got into Pine Pass which was our first big construction area. We passed through one the other day, but it was easy to get through, just a little dusty. We had to wait for a while at this one and we chatted with the construction worker for a while and some of the truckers. Once we got moving, the road became deep gravel that was difficult to manage on the sport bike, but Clint did just fine. Some parts of it turned into wet dirt and back into gravel. Then hard pack, then gravel, then dirt. I went slow on the deep gravel. The bars just did whatever they wanted to and I could go fast enough to skim over the rocks. Once off the deep stuff, I would haul ass to catch back up. There was many 10 or 15 miles of this behind a pilot car. Then we had clear road for a while, then came to yet another construction site. This is supposed to be the last one though. This site was a lot better and easier. Got through it no problem but while waiting for the pilot car, I saw how dirty everything had gotten already and I was kicking myself in the ass for not putting the rain covers on the bags and the rain suit on. Its going to be tough to clean all this caked up mud off. 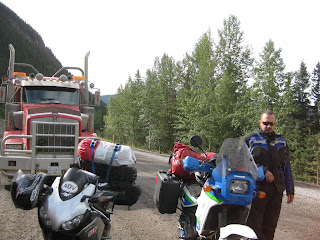 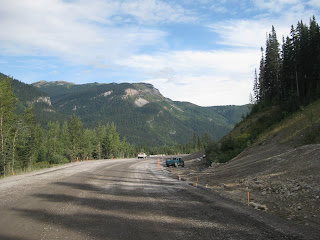 We got to Chetwyn and stopped at what was apparently the only gas station in the area because it was packed. Maybe it was just all the construction traffic stopping all at once but it took forever to get anything done. We hung out for a while and drank coffee and I had a buffalo chicken taquito from the 7/11. It reminded me of working in Virginia when Shawn and I would get these often for a quick lunch or while on break. I looked at the clock and realized it had taken us over 3 hours to travel under 100 miles.

We finally geared up and hit the road for Dawson City just over an hour away. When we get there, I see a sign for Tim Horton’s and I knew without a question that’s where lunch was waiting. I get my usual turkey bacon sandwich and ice cap and sit down with my laptop. I wanted to check out the weather for the next few days and check on email. Before I left Seattle, I was told my race car driver Jim decided to pull out for the rest of the season. Then since we were running behind, I told my boss that I wouldn’t be able to work on the other car for the next race in California. I had planned on three extra days and two of them were already gone before I even started. There was still a small chance I would have to work so I checked my email when I got a chance.

After lunch, we went looking for the Mile Zero sign of the Alaskan Highway. We got our photos and met an Asian guy from seattle in a Mini Cooper. He was driving up to Whitehorse to meet some friends. We took our picture and went on our way. The morning was kind of a downer because of the construction and lack of scenery and excitement. After lunch and the start of the Alaskan Highway, I felt reinvigorated and happy to be on the Alcan. At one point, I said to myself with a huge grin, “I’m on the Alaskan Highway!” 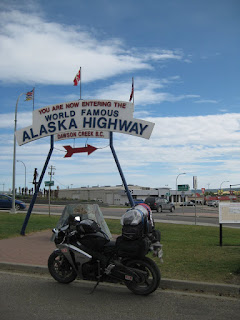 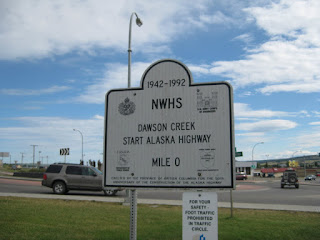 The first few hours of the Alcan were flat and boring and through farming country. Not what I was expecting but we were only getting started. Road conditions were fairly good for a while but eventually got worse and worse. Potholes started appearing and dust started piling up and flying into every corner and crevice. On several long sections, there were large piles of dust and gravel in the road and they were hard to see until you were right up on them or unless Clint when through them on the KLR and kicked up a cloud of dust. Sometimes, there was no chance to slow down and there was no choice but to run through the large thick patches at 70 Mph causing a quick speed wobble and two wheel slide. The passing semi trucks kicked up a lot of dust and gravel that cam comes flying at me and stinging my neck which was the only exposed area of my skin. My face shield is coated in dust and I feared wiping it and scratching it since there was still a long way to go of these conditions. I wanted to save the scratches until I was at least on the Dalton Highway. At one point, while my bike and body rattled through the potholes, I thought to myself, “Oh yeah, Im on the Alcan,” but this time not in the excited manner as earlier. The novelty has already worn off and my battered body and motorcycle yearned for each time I needed fuel. This is only the beginning of a long ride up to Alaska, where the Dalton promised worse conditions.

At our last stop for the day at Wonowon, we took out the map and tried to pick out a campground to stay in. There didn’t seemed to be any provincial parks in the area but we were told that Sikanni campground was nice and there was also one just a few minutes past it at Buckinghorse. Inside the gas station, I found another pair of headphones for $7. I knew the quality would be junk, but hopefully they would stay in my ear better and help block out the wind noise. The ones I had purchased in the Wal-mart were complete junk and I only wore them for a few miles before the pink ones went back in.

We decided that the Sikanni campground would probably be our best bet and made our way there. At first look, the campground looked like a pile of garbage. There was a gravel parking lot where a few Rvs were camped and a couple of tent sites on the river that were right next to the highway. As Im looking at them, I could see the semi trucks kicking up huge amounts of dirt and I wasn’t dreading breathing in all that dust while I slept and hearing trucks go by all night. There were cabins available for $35 but one look at them and I decided I would rather sleep in my tent next to the road. There was wood available for purchase and when I asked about it, the owners said there was probably a handful left at the site they were putting us at. Pulled up to the site and there was a huge amount of wood sitting there. Enough for two nights. We unpacked and set up camp. Clint went to the store in search of beer while I put up my tent. He came back empty handed so we just sat at the bench and started up the fire. Might as well get one going early, there is plenty of wood to burn and its free. After hanging out for a while, an older man came up to us and said, “I heard you guys were looking for some beer. I’ve got a couple I can give you, I’m going to pick up some fresh cold ones.”

He ended up hanging out for a while and talking about bikes and all the traveling he has done in the RV. We asked him about road conditions and weather further up north. Apparently the roads got a lot worse ahead and it had been raining in Whitehorse for weeks on end. Great, just what I wanted to hear. I took the beer he gave us and placed them in the ice cold river to chill them. A few minutes later, we were enjoying free cold beer by the river next to our free fire. Not bad after all I guess. It’s still not the great magnificent campground we were looking for in the wilderness of Canada. The running joke has become, “Okay, tomorrow night, we will find that great campsite.” 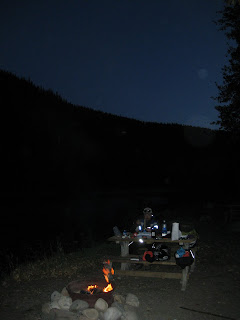 I ate some canned tuna with wheat thins for dinner then afterwards went to go clean up a little bit. It was already too cold to take a shower so I wiped my face down and was disgusted by the blackness of the towels. Gross, I need a shower. Tomorrow…
Posted by Dazn at 10:46 AM