It was a chilly morning, even inside the tent. The thermometer read 40 degrees and I could see my own breath. I crawled out and got a fire going. After the usual coffee, we got on the road fairly early. The roads did indeed get worse for a while. Potholes became more frequent and gravel traps were commonplace. Some potholes were unavoidable and Jess’s front wheels seemed to be swallowed whole as my body felt like it would be thrown off the front. Amazingly, she seems to be doing pretty well through the rough stuff. Better than me. Every time I get off the bike, I glance at the front forks expecting oil to be dripping out of them, but it has been dry.

The scenery is still plain and boring especially compared with the first day on the Sea to Sky highway. We got into Fort Nelson at lunchtime and sat down at an A&W. It was my first time eating at one of these and I was pretty disappointed. I expected slightly better and it was very expensive for a sub par burger. The soda came in a tall mug though which is a neat novelty.

After Fort Nelson, we started to cross into some highlands and into the Northern Rockies. We passed over the summit and through Summit Lake. Then on the way to Muncho Lake there were miles of beautifully colored rivers running along pristine forests and cliffs. It was as a delight to be riding a motorcycle through this area even though the roads were wet and it was drizzling in some areas. It didn’t matter though, I had started wearing the rain gear everyday anyways since it was so cold and the thought of trying to clean my leathers of caked on dirt and grime didn’t seem too appealing. There were so many places that were spectacular to the eye but pictures would never do justice. Coming up to Muncho Lake, we hit the construction zone that everyone had been warning us about. Signs for extremely dusty conditions told us so. We moved up to the front of the line and waited for the pilot car. We couldn’t see a lot of what was coming but it looked to be fine dust in thick layers on the road. I wasn’t sure how the bike would handle these kinds of conditions but there was only one way to find out. The pilot car led us at a very slow rate, at first I wondered why so slow since the road wasn’t too bad. But the dust started getting kicked up and soon, I had to back away from Clint and the pilot car a good 50 feet to be able to see anything. With all the vents and visor closed, there was still a large amount of dust coming into my helmet and it was all I could taste and smell. The light amount of rain we were getting only made matters worse as it allowed the dust to clump and cling onto everything creating this nasty paste that was impossible to see through. I didn’t dare lift the visor though. I would rather peek though the tiny bits of un ruined visor than get a face and eye full of this dust. The construction zone lasted around 15-20 miles and at the first available place, we pulled off to use the restroom and to clean off our visors. We happened to pull off at the Muncho Lake campsite which looked to be a nice place, but there was no shelter from wind or rain and it was still a little early. We decided Liard Hot Springs was the goal for the day. It was only another hour from here. 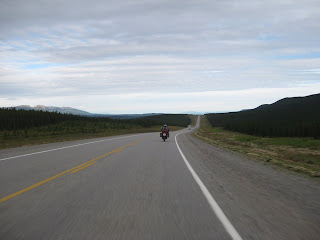 Starting to see some elevation changes. 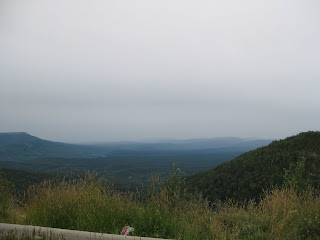 Getting into the Northern Rockies now. 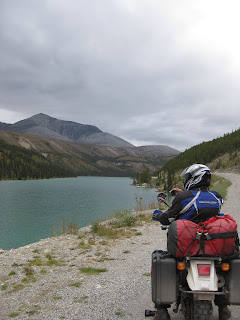 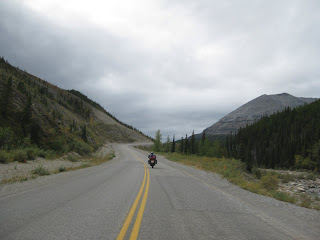 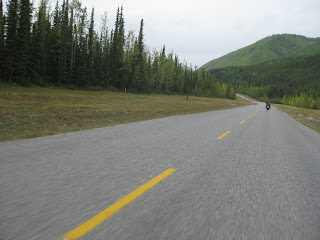 That black dot on the left in the grass is a caribou. 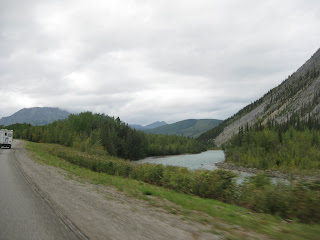 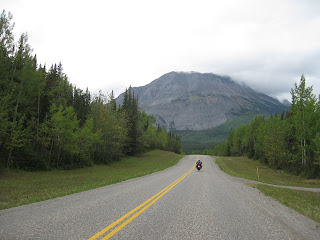 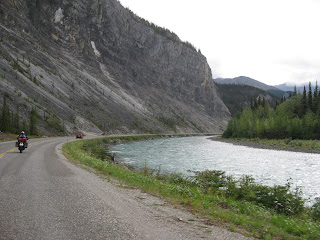 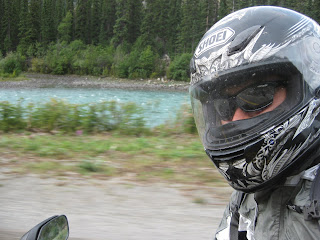 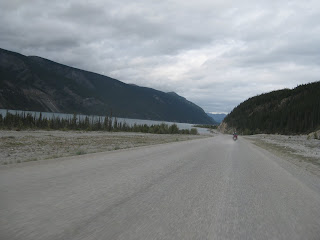 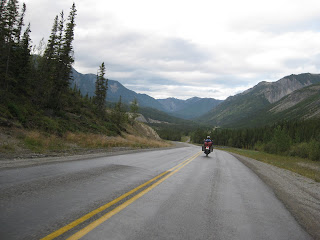 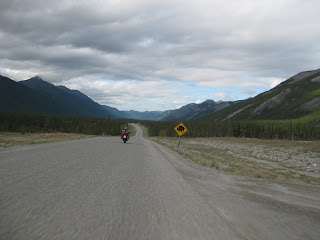 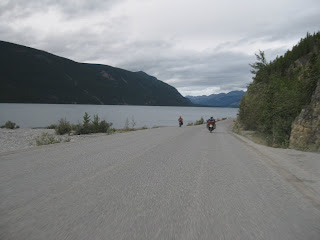 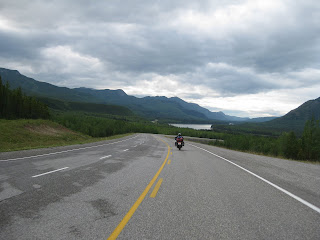 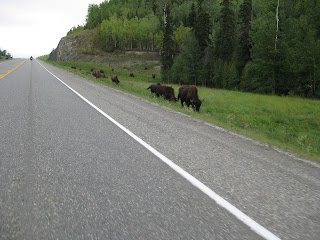 We arrived at the hot springs fairly early. Rode around the campsite for a few minutes trying to pick out a spot, but really they were all the same. We saw the Asian guy in the Mini and talked to him for a minute. He seemed keen to hang out with us that day and told us to stop by when we got a site. We chose a spot and got off our bikes only to realize that there was a terrible smell in the air. We thought the RV next to us might have dumped some gray water. We couldn’t seem to pinpoint the source of the stench. So we repacked everything and moved to a different spot. This spot at first seemed to smell better. But soon the stench came back and we gave up. We set up our tents on the edge of the trees hoping for a bit of shelter from the imminent rain. We had half a day of rain on us today and the skies looked ready to dump more. We went to the gas station across the street after paying for our site and I rented a pair of swim trunks and a towel for the hot springs. I needed to look for some provisions and I went ahead and gassed up. Clint looked at me and said, “Your gassing up tonight?”
“Yeah, might as well, we are here, and its one less thing to do in the morning.”

Maybe its just the way I think, but Id rather take care of everything while its still so early so all that was left to do in the morning was to pack up and go. I prefer to hit the road early in the morning leaving plenty of time during the day to peruse and see the sights. The small gas station had nearly nothing in the store. I bought a liter of water that cost $4. Wow. While waiting for Clint to finish, I was being attacked by bugs for the first time in a long time. Everyone said that the bugs on the way up the Alcan were ferocious and this was my first experience with them. It had not been a problem at most places, I think it was more to do with the shitty gas station than anything. I got fed up with the bugs and just left. I changed into the shorts and grabbed my towel ready to get my first taste of hot springs. Clint decidedly to get some shorts and towels too so I walked with him back to the entrance and back to the campsite and waited for him to change. While walking out to the hot springs, we crossed paths with the Asian guy again. He said the hot springs were great and we should stop by when we got done. We had walked by his campsite on the way to the springs to see if he was around, but I guess he was already soaking. There was a nice boardwalk leading to the springs and the area was actually quite nicely done. There were bathrooms and changing rooms and the springs were lined with a nice wood deck.

The water was incredibly hot at first but after just a few seconds, it felt wonderful. Especially since its been a few days since I’ve showered, but I wasn’t going to tell anyone else that. We sat at the cool end of the pool for a while and chatted with some of the people. After a while, I was starting to prune and it would be dark soon, so I decided to try my hand at the hot end of the springs before I got out. It was definitively hotter with every step. You could feel the cool water at the bottom and I was instructed to “kick” up the cool water to mix with the scalding hot water on top. I didn’t make it too far to the hottest end before I had to stop. It was just too much and not very enjoyable. That’s good enough for me. I got out and dried off. The other people there say that the best time of year is to go when its -30 or -40 out when there is snow and ice everywhere and the sunlight hits the frost creating a beautiful spectacle. That sounds great and fine while your in the springs, but I couldn’t imagine getting out of them in that weather. Just leave me in there until spring when all the snow and ice melts. You’ll have to fish me out as a giant prune.

I was thinking about just doing another ramen dinner tonight, but for some reason, I decided I would cook up the rice and spam. Clint donated some tortillas to the cause so we could have rice and spam burritos. The jasmine rice smelled great as it boiled, the smell took me back to my parents restaurant and home and brought back sounds and visions of my rice cooker bubbling and the top clinking and clanking as the boiling water lifted it off the pot and dropped it back down hundreds of time a minute. Then as I started on the spam, I smelled burning. Shit! I burned the rice! How did I let that happen. As an excuse, my stove doesn’t really simmer well. It just cooks and boils, so I blame it.

The smell of the spam cooking started to make me really hungry. I told Clint to go ahead and get started eating while I finished up cooking. As I cooked the last bits of the spam, the rain started falling. Just a little at first so I didn’t bother, then it really came down and I had to just give up frying the last bit of the spam and grabbed everything and put it under the cover of the trees. I ate the rest of the rice and spam standing under the tree watching the rain at night with drips occasionally falling on me once the tree branches were saturated with moisture. Great. Now Ive gotta clean up too. I really felt like just leaving everything out for the morning but there had been a bear in the campsite earlier that day so I couldn’t. I sat there in the rain, attempting to scrub and clean the cookware.

Standing in the cold rain cleaning cookware is something I never want to do again. Thats just a miserable experience. I stood outside the tent for a while, aggravated at the rain. Tired, but unable to sleep, I climbed into bed and stripped off the wet clothes, changed and laid there for the longest time waiting for the sound of the rain splattering on my tent to put me to sleep.
Posted by Dazn at 4:33 PM