Late start this morning. We both slept in until 9 anticipating rain in the morning but it was clear. I had some coffee and finished packing up but Clint was lagging this morning. I went back to the gas station to see what they had for a snack and when I came back, Clint was repacking. Apparently his bike had fallen over while he was packing. We both parked in a strange spot so the bikes would be covered by trees overnight. There was a helicopter landing nearby so Clint went to go check it out while I huffed and puffed and pushed my bike out of the hole we parked them in. I guess Clint didn’t push his out first. While loading up his bike, Clint asked me to fill up the water, I told him I wasn’t going to walk all the way to the pump in full gear when we could just easily fill it on the way out. I guess he wasn’t happy about that because when leaving the pump, he peeled out in front of me and shot some dirt onto me, haha. Oh well.

As soon as we left Liard Hot Springs, we passed by a large herd of buffalo on the side of the road. Then not long afterwards, we caw a caribou on the side and it ran alongside us for a while before it spotted a clearing in the forest and darted in. Not long after that, it started to rain on us. We stopped at the outskirts of the dark clouds at first and Clint said, “Ok, we have two options, ride right into it, or try and wait it out.” 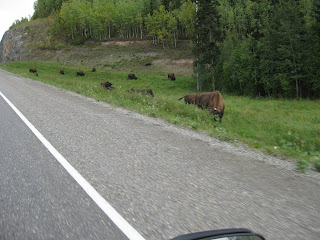 I looked at the direction it was coming from and it didn’t look like it was going to stop anytime soon. “Lets just keep going.”

The rain wasn’t heavy, but enough to be annoyed by it. This would continue all the way into Whitehorse. We stopped at Rancheria for gas and the peaks just ahead of us were getting a new dusting of snow. The dark gray clouds ahead of us coating the peaks looked sinister and I hoped we weren’t heading in that direction. I looked at the map to make sure there wasn’t a high pass we had to go through, luckily there wasn’t anything major on the map and we kept moving.

A few hours and 150 miles later, we came into a small town a few hours shy of Whitehorse and stopped for gas and coffee when two bicyclists rode up behind us. This young couple left Duluth, MN over 90 days ago and were riding to Anchorage. 90 Days!!! I gave them props and told them they were awesome. They were only slightly impressed by my 70 days but did say that they at least were warmer while pedaling versus me being frozen by wind chill at 70mph. They camped the entire way too, but are lucky enough to be able to stealth camp. Too cool, that’s definitely on the list for me. Bike the PCH, or Blue Ridge Parkway.

Whitehorse just a few hours away and plenty of daylight left we decided to ride on. There was one last construction area before Whitehorse and it was nasty. The rain kept it from being too dusty but it meant a lot of mud. It wasn’t bad to ride through but it caked everything with crap. I could barely see through my visor and rode some of it with it open. Good thing I had sunglasses on. The rain ended before we got to Whitehorse. I looked up at the clouds and wait, what is that? Is that blue? The first blue skies we have seen in a couple of days. Even though it was just a few small spots, it was fantastic to see. 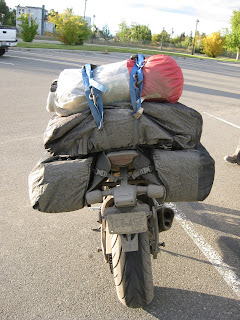 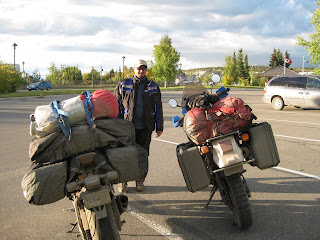 We got into Whitehorse around 8:30 and I started to look for hotels. I ended up calling a few places and it probably cost me $10 on my phone bill. I think its pretty lame that Canada and US don’t share a lot of things and phone service is one of them. The cheapest place I could find was just over $100 at Stratford Hotel. The hotel clerk was an Asian lady so I spoke to her for a little while. After a shower, we walked the streets looking for a place to eat. A lot of things were already closed since it was after 9 and the few places that were open were really expensive. After spending $100 on a hotel room, I was looking for a cheap dinner. I was surprised to see a Vietnamese noodle soup(pho) restaurant in town, but they were closed too. There were several Chinese and Japanese restaurants as well which surprised me considering the remote location. I guess this little town is the capital of Yukon. We ended up at a Chinese restaurant and it wasn’t too bad. Fairly cheap at $12 or 13.

Back at the room, we checked the weather for the next couple of days and forecasts called for rain from Thursday through Sunday. Crap, at this rate, we were to arrive Wed and ride the Dalton Highway in the rain on Thursday. We made the decision to ride all the way to Fairbanks the next day, about 600 miles of the Alcan in one day. That should be fun.
Posted by Dazn at 5:19 PM