Plans for the day.

3. Check out of motel

4. Knock out a couple hundred miles.

I guess that kind of kills the rest of them. Okay, change 2 to “How do I get my clothes back?”
After a visit to the front desk, I went back to the room and packed what I could and hung out waiting for the Laundromat to open. I was kicked out of the hotel at 11 so I went across the street to the Laundromat and waited outside. A local woman asked what I was doing sitting outside by myself and I told her what was going on with the Laundromat. She says the owner also works at the Tesoro across the street and that I should go there and speak with her. So I started making my way to the petrol stations that were side by side, then I heard, “Tesoro! Tesoro!” It was the lady I just talked to. Confused, I pointed at one of the gas stations. They were both Tesoros. “Tesoro! Tesoro!” She walked away leaving me more confused. Whatever, I returned to the bench in front of the Laundromat and waited. It wasn’t long before a girl strolled up and opened up. I gave her a minute to get things going, retrieved my stuff then unpacked to repack and went on my not so merry way.

The rest of the day went pretty smoothly. Not too many miles though. I got to Tok and started thinking about a campground that Dan had told me about. Looked it up and it was just down the street. It was a little early to be stopping already, but I like to support motorcycle friendly places. When I pulled into Thompson Eagle Claw resort I saw a sign advertising teepees and ambulances. Am I in the right place? A woman walks out of the house off to the side and introduces herself as Vanessa, the owner of Eagle Claw. She tells me Im the only one here and I could take the hostel cabin for $10 and basically have the cabin to myself. Done. I rode to the back, past the teepee and other cabin then stopped at my cabin across from the ambulance. Okay, I’m curious, I gotta check it out. Yup, it’s a bed in an ambulance. It has a heater and actually looks like it would be comfortable as long as you didn’t get up too fast and slam your head against the roof. I’ll stick to the cabin. 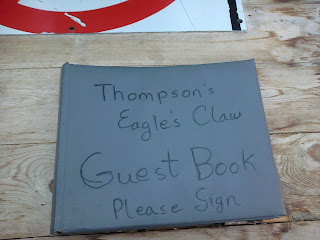 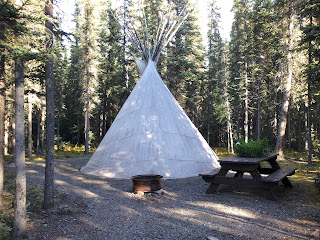 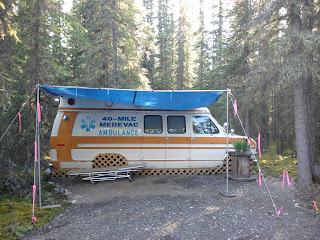 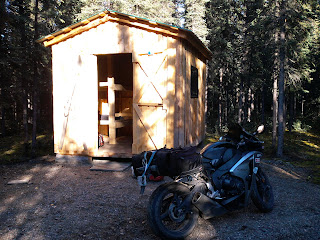 After unloading, Vanessa comes back out and tells me theres a steam house and free firewood. We chat for a bit and I give her Dan from Adventure Cyclework’s card so hopefully they can refer customers to each other. She goes to start the steam house and I start a fire and set the tent next to it to hopefully dry it out a bit. I lay down on the bench next to the fire and just relax for a while. At one point, I just busted out laughing because I’m thinking, “What the hell am I doing in Alaska on a sport bike?”

The steam house was really nice after the past few days. I kept thinking about how much that 600 mile day on the Alcan sucked. I really don’t want to do that again. Walking back to my cabin, I saw that someone else has shown up on a GS. I talker to Raven for a minute while she unloaded. She had just landed a job with MotoQuest and was riding one of their bikes down to Arizona for them. Seems like a pretty sweet gig. Get paid to ride around the world with a bunch of people who share your passion? 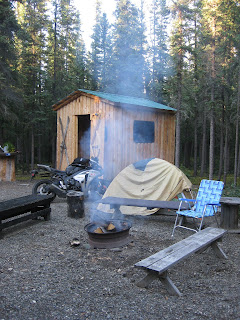 I spent the rest of the night just reading and staring at the stars. Its supposed to be 32 degrees tonight or else I would just sleep on the bench. At this moment, I felt alone. My back against the hard wood of the bench and one side of my body warmed by my fire, I couldn’t help but think of the comforts waiting for me at home. For years, Ive been dreaming of an adventure such as this and here I am, in Alaska, with nothing to do but tend to a fire. I stared at the Milky Way for hours thinking what had led me here. Everyone asks, why not fly or drive to the places I wanted to go. Without my motorcycle, traveling only meant destinations. Being in the wind, the rain, the beating sun and dust, dirt and grime in my teeth is the journey. The loneliness soon departed and a Cheshire cat grin spread across my cheeks. Ive gone as far north as I planned and now it would be easy for a while. All the way north, only way to go now is south. I took one last look at the billions of shining dots in the sky then went to the cabin and crawled into the warmth and consolation of my sleeping bag.
Posted by Dazn at 8:58 PM