When the alarm rang, I didn’t even want to reach outside of the sleeping bag to turn it off. It was cold. I got up, threw on more layers and went outside to start a fire. Packing went pretty slow this morning, the fire proved to be a distraction. Eventually I got back on the road and went towards the border.

I tried to enjoy what I thought were my last few moments in Alaska. Near the border, I stopped at a gas station for one last fill up of “cheap” American fuel and started talking to a few other travelers. I asked about the Cassiar and what it was like for fuel. Most everyone told me my range wouldn’t be enough. Riding back down the Alcan didn’t seem to interest me too much. Been there done that and Im looking for a different way. A couple suggested the ferry from Haines down to Bellingham, Washington. Not having thought of it before, I asked a few other people what they thought. Most seemed to say that it was an experience in itself. Dolphins, whales and seals were often seen on the way down. At this point, I still hadn’t seen much wildlife except for a few caribou here and there so I decided to take the ferry as it would probably be my only chance to see dolphins or whales in the wild. I made a call to the ferry company and booked a ticket for me and Jess to Bellingham. The ferry ride would take several days but put me in Seattle the same day I was planning to be there. Done.

This gave me a few extra days to reach Haines, AK so I could now take it really easy and ride as slow as I wanted. At the border crossing, the usual questions were thrown at me and as I explained my journey to the attractive border guard, she looked at me inquisitively when I told her I was headed to Haines for the ferry. “Isn’t that cheating?” she says. I guess in a way it is. I hated her for asking me that. 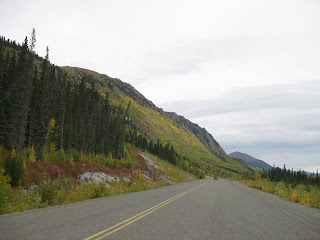 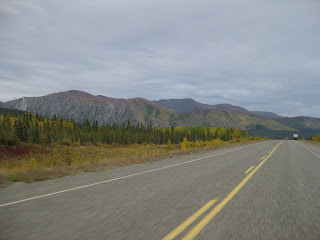 I cruised towards Lake Kluane where I was planning on camping. As I neared Pine Valley and the lake, the wind picked up tremendously. This was the worst wind I had ever felt since Ive left. Worse than the flat lands of North Dakota. The wind direction seemed to be completely random. One second, I was leaning to the left, then to the right the next. Sometimes my speed slowed by several miles an hour and my head was jerked back by the headwind. Occasionally I would come across an RV alleviating the wind for just a second if it was coming from the right direction but it would be blowing me across the road again as instantly as it stopped. It was absolutely exhausting. The unpredictability kept my mind racing and my body flinching at every gust. I knew I wasn’t going to last long like this. My eyes were weary and my neck muscles were already sore. I just hoped to reach the lake and find some shelter from the wind. 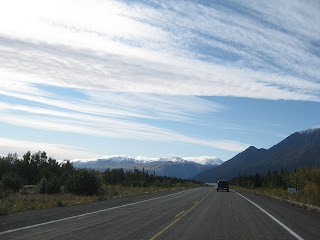 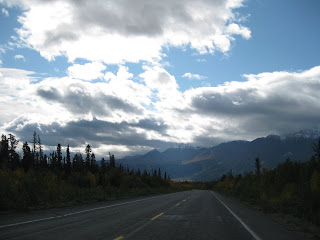 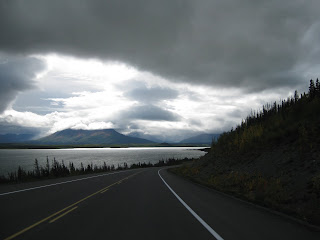 With the lake finally in view, it looked completely different from what I saw just a few days before. There was no exact mirror image on the calm waters, instead it was whitecaps similar to cresting waves on a beach. For a second, I didn’t recognize that it was a body of water. I pulled into the first campground I saw but it was closed. I squeezed my bike around the chains and rode around the site looking for a suitable shelter from the wind. Finding what I thought would be a good site, I pulled out the tent and as soon as I unrolled it, the wind picked up almost tearing it from my grip. I threw it on the ground as fast as I could and laid my other bags on it to keep it from blowing away. I staked the corners down and took my bags off the tent and went to pitch it. As soon as I lifted the center up, the stakes pulled out and Im holding onto what is essentially my home by the small hook in the center meant to support the poles. With the tent flapping furiously in the wind perpendicular to the earth, I grabbed a handful of it with my left hand and basically jumped on top of it like a soldier jumping on a grenade to save his comrades. Okay, this isn’t going to work. Not tonight. I dreaded having to pay $100 for a hotel room but I don’t think I have a choice right now. Carefully, I packed everything back up and got back on the road. Half an hour later, I came across a gas station with a hotel in the back. Destruction Bay I believe. As I filled up, I heard a voice say, “Holy shit, you are insane!”

I turned to see a man standing next to his RV with hair flying about and his windbreaker flapping in the breeze. I tried to smile and said, “Yeah, Im done. Totally exhausted right now.” His RV was swaying in the wind and the sign post with gas prices was swaying and creaking on old hinges and chains.

Inside, I begrudgingly paid the $110 for a room and parked the bike in the back. I laid down on the wooden deck in front of my room and rubbed my eyes. Another traveler walked up besides me and says, “You look like you could use a drink.”

I opened my eyes to 2 gallons of Canadian Whiskey. He cracked one jug open and handed it to me. “Drink up.”

I drank a mouthful and said thanks. I asked what the weather would be like for the next few days and he says, “Just like this. It will be like this for a few days, then the snow will start.”

Great. Ive been fairly lucky with the weather thus far so I figured a couple of crap days out of 100+ is a pretty good ratio. I went inside to shower then climbed into bed and drifted off.
Posted by Dazn at 9:20 PM