When I turned over to turn off my alarm, my neck brought instant pain. The wind yesterday really beat me up. I stood in the shower for what must have been half an hour and just let the scalding hot water hit my sore body.

Back on the road, I made my way to Haines Junction. Stopping at a small grocery store, I ended up chatting with a group that was about to go kayaking down a small river in the park. The young kids were running around my bike and asking me all sorts of questions. One asked his father for some money for candy inside. Remembering I still had a handful of Canadian change, I pulled it out and gave it to the young girl and told her I’m giving you this to buy some fruit or some crackers. I don’t want to see you coming out of there with candy, or Im going to eat it.
Her father laughed and thanked me and told the young girl to scurry along. We talked for half an hour while they waited for the rest of their group to show up. I asked them about the road to Haines since some of them had just come from that direction. Rainy, cold and extremely foggy in the higher elevations but not bad. One of the wives said it can be unpredictable sometimes and if I found myself in a storm, there was a small shelter near the peak where I could hide out for a while.

They asked if I wanted to come kayaking and fishing with them, but I didn’t want to intrude on their family outing. I was ready to get to Haines and relax for a few days while waiting for the ferry to arrive. I threw the rain covers on the bags and went on my way again.

This area is absolutely gorgeous even with the grim and grey weather. The clouds were getting lower and the temperature dropping quickly. Occasionally, there would be a clearing in the clouds and I would get an magnificent view of snowcapped peaks with large blue glaciers on the sides. Clouds were moving quickly slamming into the face of the peaks and rolling off the peaks. As I neared the highest point, I was literally riding in the clouds. I felt absolutely exhausted after yesterday but being in this scenery was incredible. Visibility in the clouds were low and I didn’t dare stop in case there was someone behind me. After the clouds cleared, I came across a small clearing on the side of the road where a large pack of bicyclists were resting. These guys are nuts! I stared at them as I rode by and they all stared at me. A few gave me an enthusiastic thumbs up so I stood on the pegs and gave them one back. Haha. I love these moments. Pure respect for one another’s craziness. 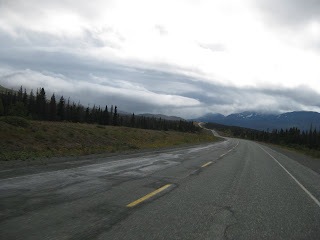 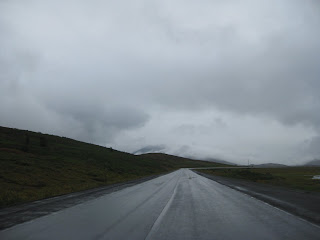 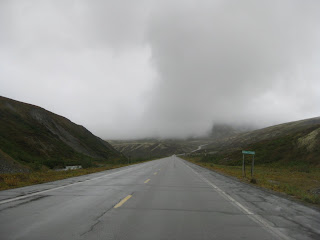 I kept riding through some of the most beautiful scenery I have seen thus far and approx 30 miles before the border, I stopped at the side of the road for a quick rest. The clouds moved away just long enough for me to see that I was in front of a peak with a glacier down the side. Awesome. I took a few pictures then a car pulled up and ruined my moment with nature. Two old ladies got out and chatted me up for a while. They offered to share their picnic lunch with me, I declined. I wasn’t too hungry and I left them alone to enjoy their lunch with the glorious background. 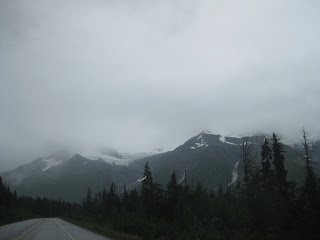 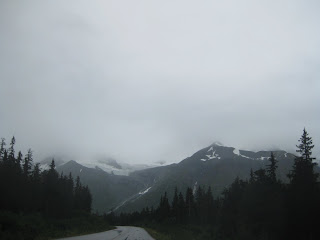 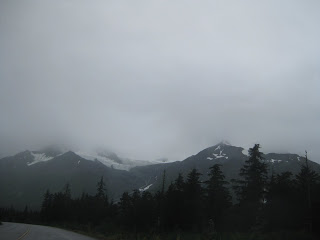 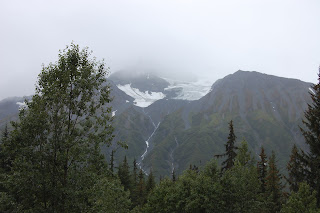 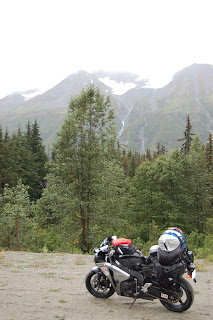 At the border crossing back into Alaska, I talked with one of the guards for quite a while. After the formalities, I parked the bike and we sat together for a while and chatted. Apparently this wasn’t a high traffic crossing. I asked about places to camp and what there was to do in Haines. He says there isn’t a whole lot to do in Haines except for fishing and sight seeing tours to Skagway and the fort. This weekend was a party weekend of sorts, it was the Mardi Gras of Haines this weekend. Unless I really felt like partying and dealing with all sorts of drunkards, I was told to stay out of the bars. After a while, I decided to get back on the road and find some lunch.

On the road in, I spotted a couple of places to camp, one was called Mosquito Lake. Eh, I’ll skip that. There is a section that passed by the largest nesting area for eagles. I stopped for a while to see if I could spot some. It didn’t take long to see and hear them. You can literally hear those massive wings flapping. It was ridiculous, like something out of National Geographic. I sat for a while watching them glide over the river, occasionally flapping those massive wings to stay in the air. My stomach eventually told me it was time to leave. My fuel light came on as I approached the first gas station back stateside. I grabbed a snack after fueling and started plugging campsites into the GPS. I had passed by a free camping spot next to the river but it was literally just a clearing next to the road. Not wanting to be so close to the road and without a toilet or a place for a fire, I passed on it.

Once in town, I found the small ferry terminal and walked around the docks for a while. I cruised around town just checking things out. I was going to be here for a few days so I wanted to check out places to eat and somewhere to resupply. Seeing a sign for campgrounds, I followed the road until I saw a free campsite by the side of the road. Unfortunately, it was only for hikers and bicyclists. The road continued but turned into deep mud and I had to turn around. The state park further on was unreachable unless you have a 4x4 vehicle. Oh well. 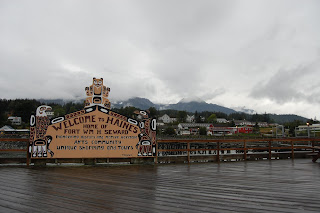 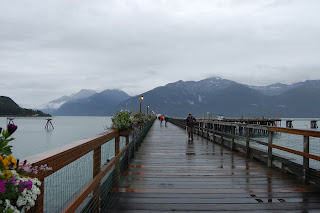 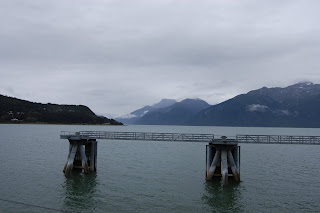 Back in town, I spotted a small food trailer and decided to stop for lunch. It was literally a small trailer where they served tacos, nachos and things of that nature. I ordered nachos as usual and sat down at the bench and had nachos in the rain. I didn’t care. I was already so used to being wet and cold. After eating, I asked about campgrounds again and was told Chilkoot lake was a popular spot.

I went that direction and saw why it was so popular. Linking the ocean and Chilkoot lake was a shallow river with gorgeous bluish green water. At first, I didn’t notice anything special about it, but after looking closely, I realized there was something jumping out of the water. I pulled over and walked to the bank. Holy crap, that’s salmon. A whole lot of salmon. I’d never imagined I would be seeing this with my own eyes. I couldn’t help but sit there for a while and watch one of nature’s marvels. Then a ranger pulled up and told me I couldn’t park there and to move on. Fair enough.

At the campground, I rode around for a while and picked out a spot with plenty of rain cover. I paid the $20 for two nights and parked the bike. It was still raining so I didn’t want to break out the tent just yet. I was hoping for a quick break in the rain to pull everything out of the dry bags. Instead, I decided to walk down to the lake.

Chilkoot lake turned out to be a highlight of my trip. It was absolutely indescribable to just sit on a rock and watch the salmon jumping clear out of the water. Flocks of birds would fly by occasionally disrupting the otherwise complete silence save the noise of the salmon flopping back into the lake. After a while, a couple people showed up carrying fishing poles. I watched a few people fish for a while. Then I heard someone say, “The bears are here.”

Nobody seemed to be too worried, they just put away their fishing gear and walked a little bit further down. Then 3 grizzlies come walking up the river. A mother and two cubs. They slowly amble towards us stopping occasionally to catch a fish as it jumped out of the water. I watched them for a while and they didn’t seem to care about anything but eating a whole lot of fish. They fed in the area for about an hour then started back down towards the ocean. Well, Im happy now. I just saw grizzlies bears catching salmon out of the 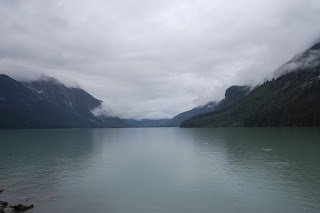 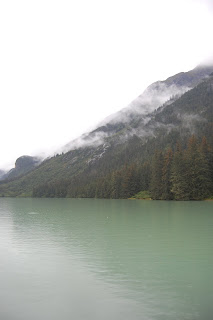 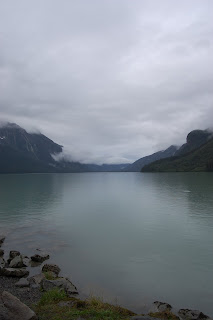 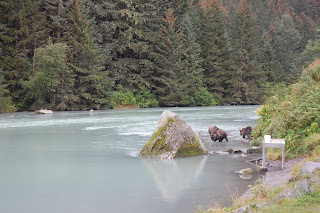 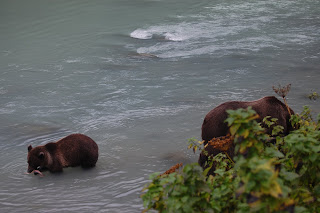 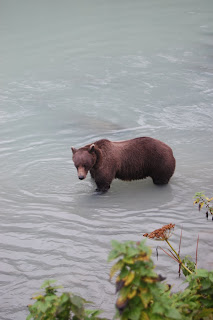 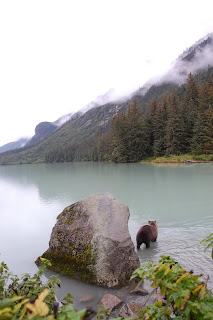 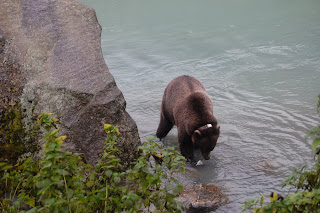 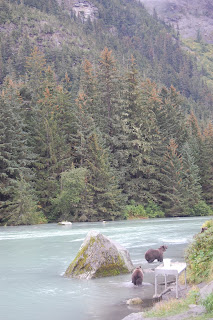 I hung out at the lake for the rest of the day just talking to random people and reading. It was in the mid 30s that night. Cold enough to suck, but warm enough not to snow.
Posted by Dazn at 9:39 PM