I got up bright and early today, I knew I had a long day ahead of me. I left my aunts house in Sebastian just after 7am, went to fill up at the Flash Foods. While filling up, a gentleman came up and asked if I was the one doing the Alzheimer’s ride, I said yes and asked how he knew. Apparently he saw me on tv last night, haha, crazy. Then the couple in the car behind us were like “Yeah! That is him, I thought I recognized the bags on a sport bike, don’t really see that too often.” Ha! I got a kick out of it. 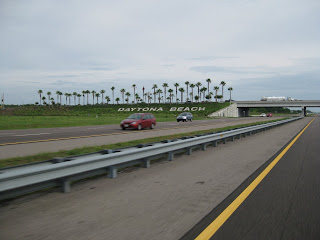 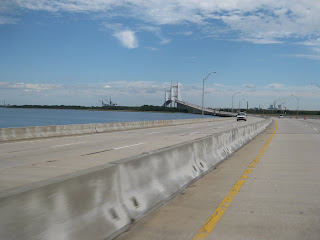 Today, just like the rest of Florida, Im hitting the superslab. I-95 up to Jacksonville then over to Ferdinand Beach to meet up with an old elementary school friend Adam. He moved down to Jacksonville 6 years ago and I havn’t seen him since high school. Never in a million years did I think in elementary school that we would be riding motorcycles together one day. After taking a wrong turn, I pull up to see Adam already waiting and we catch up for a while before we don our helmets and go for a quick ride. Adam was gonna show me around some back roads in the area. It was no Deal’s Gap but its Florida and it was the most twisties I had ridden all week. We stopped at a place called Kings Ferry on St. Marie River and hung out for a bit. Nice little spot. 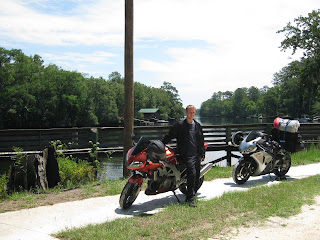 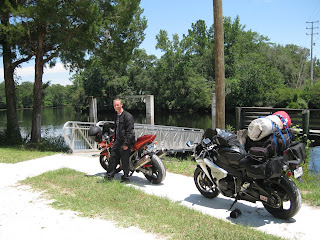 Georgia is on the other side of the river.


Earlier, I noticed Adam had a throttle rocker and I said I needed something like that, then he tells me it was only $12 at a local shop up the street. I’m like, lets hit it! I ve got $12 on me. But, its Monday, and they are closed. So Adam whips his off and hands it to me. I try to give him money for it but he refuses and says its his contribution. Thanks Adam! It has made a huge difference!

After our ride, I had to get back on the road so we grabbed a pic and I went on my way. Took 95 to 16 to get to Macon. It was a long boring ride and it really put a hurting on my rear tire, noticeable wear in just those three hours. I’m watching the rear tire wear closely, Im crossing my finger it makes it to Seattle. 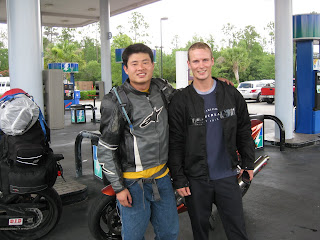 Going through Dublin, there was a large storm ahead. Great 5th day in a row with thunderstorms. When I got underneath it, it had just moved to the south so instead of being soaked and blown everywhere again, I got a very nice ride through some cool air. Finally! A day without having to the do the rain gear dance.

Get to Macon, go to my parents restaurant for some grub. First thing that happens is my mom wants me to figure out whats wrong with the Angry Birds game on her iPad, haha. I get that done while catching my parents up and eating. I got to my parents house where I’ll stay the night just before dark. I guess I ‘ll service the bike in the morning. I don’t have to be in Atlanta until 4 pm for a demonstration with the Atlanta Police Department. Unfortunately, its supposed to storm tomorrow here and Atlanta. Back to the rain gear dance. I’m looking forward to Deal’s gap area Wed. Forecast is sunny skies. 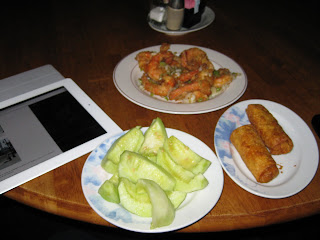 I’m catching the blog up tonight since the next few days or so I’ll be camping so probably no internet connection. I’m also doing last minute changes to the bike and a quick service. I planned the route so that I would come back here after a few days so I could have another trial run before leaving for 4 months. The cradle for the GPS decided to crap out so now I have to charge it using the USB, but the Garmin’s backlight doesn’t light up at all if the USB is plugged in. So I have to find an address to send a new cradle to. I brought a spare GPS, but no moto mount. I could be paper mapping it soon.
Posted by Dazn at 12:49 AM