Even though we got up fairly early this morning, we didn’t leave the campsite until 10am. Clint had a breakfast of oatmeal and made us some coffee. This trend would continue while we rode together. I also decided to grab a shower knowing it might be a while before the next chance. We went straight for the border crossing at Blaine and for the Peace Arch. This would be my third corner of the trip. We stopped at the park and took the obligatory photos. In the park, there was a sculpture with an engine block as the base and we spent a few minutes trying to determine what it came from. Both of us being mechanics, there was a sense of defeat when neither of us could identify the vehicle from which it came. We moved on to the border crossing. 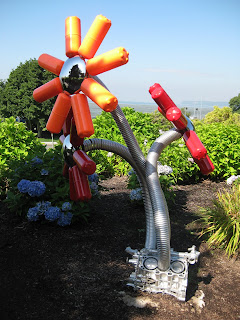 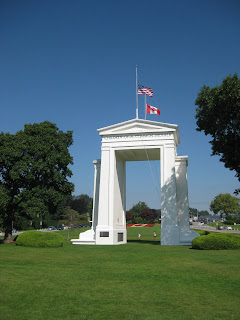 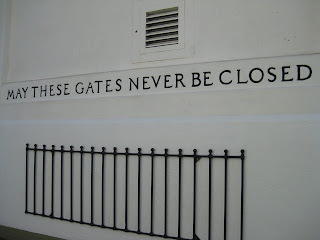 Not like it matters, you can drive around them...

I was expecting a much bigger ordeal than what we experienced. There was only a short line and Clint went ahead first. He was quickly released then I pulled up to the booth. Passport and a few quick questions and then we were in Canada. We were soon pulling into downtown Vancouver and was swallowed by the city. The skyline of the city was quite impressive with lofty apartment buildings dominating the horizon. Getting through the city was not quite as impressive. Stoplight after stoplight filled with cars. We came to an intersection where Rte. 99 turned off and Clint made a wrong turn and not even looking, I followed. We continued down this way for a few miles until I finally took the lead following the GPS out of town. We killed a few hours making our way through town. 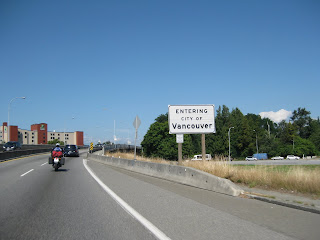 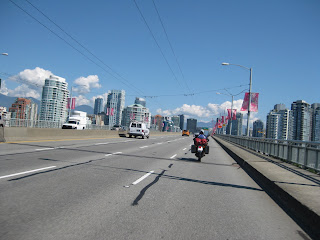 Back on the right track, I stopped at a gas station just outside of the city and filled up and ate some snacks. The fuel was more than $5 a gallon and I knew I was in for an expensive couple of weeks. Its only going to be worse from here. Rte 99 becomes the Sea to Sky Highway which is the perfect name. You ride along the coast of the Strait of Georgia and all you can see is the water and islands with glaciated peaks rising out of them. It’s a beautiful ride for a couple of hours. Then it eventually led to higher elevations through Whistler, by the Blackcomb Glacier, through Pemberton, more mountains passes with gorgeous scenery, by Duffy Lake, Seton Lake and down into Lilooet. Just before Seton Lake, I pulled my camera out of the tank bag to snap a quick picture like I normally do but when I stuffed it back into its front pocket and pulled my hand away, something immediately felt different. I looked down to see the pocket empty then in my left mirror, I could see an object bouncing on the road splintering and shedding pieces. Shit. On the brakes. When I got turned around, Clint had already picked up the camera and we started looking for the battery that flew out of it. Found it just a few feet away and I stuffed it back in and powered the camera up. The screen is shattered and the body is dented, but it still turns on. I take a couple of test pictures and it seemed to make all the right noises but there is no telling if it actually worked since the display was destroyed. I’ve used the camera in the same fashion for over 2 months now and have taken thousands of photos, I guess it was bound to happen sooner or later since I was doing it more haphazardly than before. Oh well, we moved on. 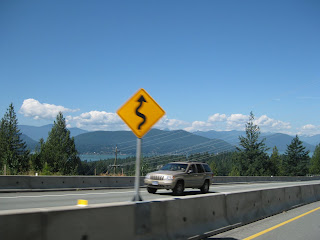 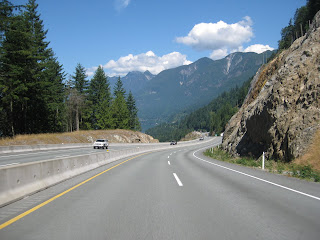 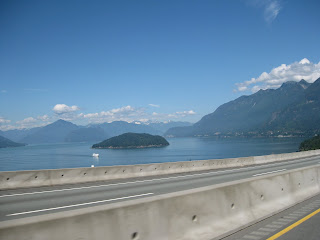 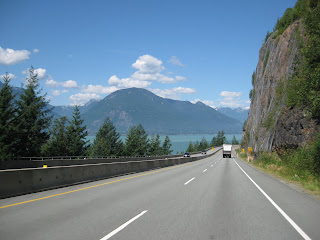 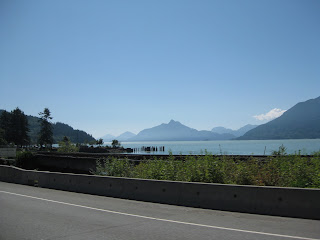 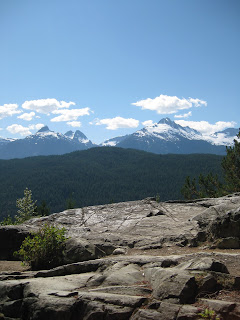 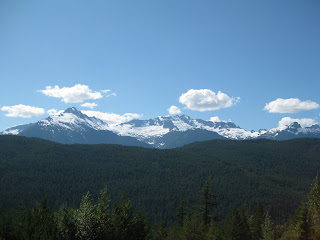 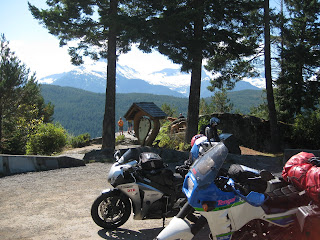 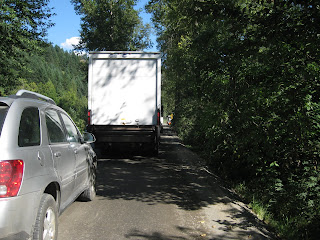 The first construction zone in Canada, this one was nice and short. Not too far after this there was a horse just walking around on the street. 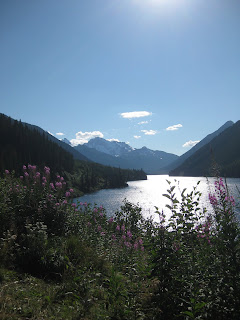 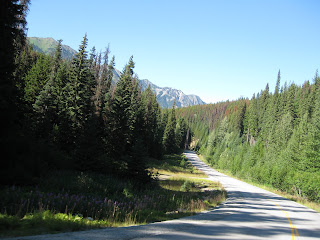 This is the last picture I will ever see on my point and shoot camera. Seconds before the demise of the screen. 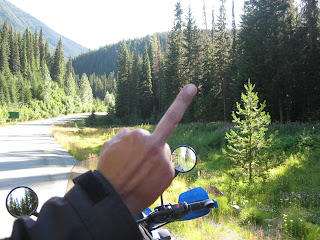 This is how Clint tests it.

There the scenery starts to change quite drastically. Gone are the glaciated peaks and now there is dry dirt, canyons and desert plants and brush. Even the faces we encountered seemed to be changing. There are several Indian reservations nearby and the facial features and skin color seemed to change almost instantly when we crossed over the imaginary line that separates the reservation from the rest of the area. 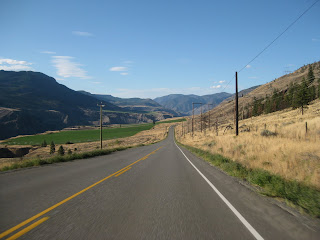 
We stop at a gas station to fill up and get more snacks as we passed on lunch to make up some miles. I looked down to see my headphones missing. Damn. Why am I losing stuff today? Its going to be a while before I can find a set of decent headphones. At this point, it is time for us to start looking for campgrounds. There are so many flat bluffs where I would have loved to camp overlooking the canyon but its far too open and we would have been vacated before even putting the side stand down. Plenty of RV campgrounds around but nothing that offered the seclusion I was looking for. We kept riding further into nothingness when we happened upon the Marble Canyon Provincial Park. It’s a very small campground on a small lake but it will do. It’s cheap and we are here. 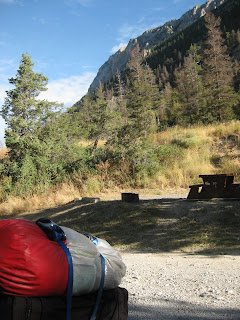 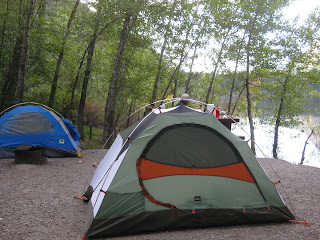 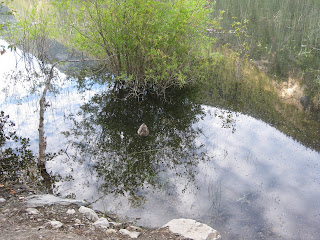 After setting up camp, we start making some dinner. Clint made his package of red beans and rice while I fed some bagel crisps to the ducks that were wandering around the campsite. First there was the one curious duck, but he left and came back with several of his friends. Pretty soon, I had them fighting over the bagel crisps. I probably shouldn’t have been feeding them, but it was good entertainment while I waited for dinner. We could hear a waterfall somewhere but couldn’t seem to find it after wandering around for a bit. It took a while to realize that it was on the cliff overlooking the lake and was partially hidden by trees and bushes. As we walked back to our site, a young boy and girl were stopped next their bicycles and the boy was struggling to put the chain that had fallen off his sisters bike. I stopped and replaced the chain on it for them and went on our way. We hung out for a while then turned in. Sleep came easy that night.
Posted by Dazn at 5:50 PM