It was a chilly night in the Black Hills so it was tough to crawl out the warmth of my sleeping bag. A few times during the night, I heard what sounded like huge pissed off cows. I assumed it was buffalo but I wasn’t sure and I wasn’t going to crawl out and find out. When I finally unzipped the tent and looked out, there was indeed a herd of buffalo on top of the hill next to my tent. Cool! I was surprised not to see any yesterday so this was a nice treat. It was drizzling so I used my cheap point and shoot to grab a pic then started to pack up. It took a while to pack this morning as I was still tired and the rain just sucked the energy out of me. I finally left the campsite at 8am and made my way towards Wyoming. I wanted to ride the Beartooth Highway at the end of the day. This would put me half a day ahead of schedule and perfect timing for my appointment at the dealership. 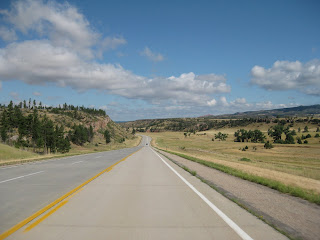 
Today is pretty much an interstate day. Needing to make up some time, it was the best way to go. Also, I was afraid of running out of gas again and I didn’t want to put on extra mileage because my tire was looking really thin. Its going to be close.

I cross into Wyoming via backroads, stuck behind Harleys the whole way. Then I got onto I-90 and finally some clear road. I stopped every 2 gallons again for gas. Halfway though Wyoming, I crested a hill and there it was….The Rockies in all of its glory and massiveness. Beautiful. Its hard for me to believe that I am here now. Its been a long time coming to be able to see these gorgeous snow capped peaks and Im so happy to finally get a glimpse. Ive been on the road for a month and a half now and its barely sunk in as to what I’m doing. Today, I am fully aware. I raised my left arm in triumph and shouted inside my helmet. “YYYEEAAAAAA!!!!!!!”

I raced this train for an hour. 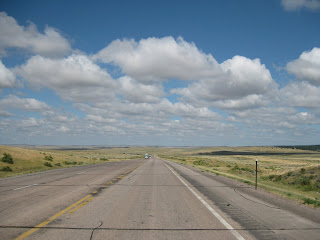 So much sky.
you can see the shadows each cloud creates. 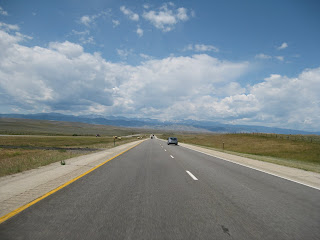 Even though Im on the interstate just racking up miles, I have a big smile and Im happy to be with Jess and riding across America. I hit 10,000 miles today on this trip alone. Although I still have a long long way to go, this feels like a rather large achievement. Its another milestone to my road trip. The next will be arriving at the West Coast in Seattle. Then it’s a huge one after that, Alaska and the Arctic Circle. Everyday Alaska plagues my mind and the closer I get, I better I feel, but the worse I feel. I know it’s a long way still and it will be a challenge with the weather turning colder and colder by the minute. I just have to push the doubts aside and continue on.

As I continue up I-90, I follow the Rockies up into Montana. There are several rain storms in the area and somehow the road twists and turns around and between them and I manage to stay dry. In Montana, I continue on the superslab into Billings. On the way, I passed hundreds of Harleys. Some waved, some didn’t. Personally, I stopped waving to the Harleys, but when I did see something two wheeled other than a Harley I waved frantically and so did they. I cruised at 75-80 the whole way to help conserve tires so I was passed by lot of Harleys. Some waved and by the end of the day, I was so tired of waving back that I started to not just wave but do random things. Sometimes I would just throw up my usual peace sign, sometimes I would throw up gang signs, sometimes I would give them the “shocker”, sometimes I would take both hands off and do the “wave” hoping one or two would follow along. But all I got was strange looks. Hahaha, it was amusing to me. At one point, there were 4 bikes coming up and the first two were Harleys, I threw up the shocker and when the third bike came alongside, I noticed it was a Kawasaki ZX-6r. I threw up the shocker again not thinking twice about it. I used to own one of these so I turned to get a better look and it ended up being a young female rider, a pretty one at that. She laughed, pointed to me and gave me a thumbs up. I laughed and gave her a thumbs up back. Nice to see a sport bike again, let alone a young pretty girl on a sport bike. Its been a while since Ive seen that. The past few days have just been leathered and sunburned old ladies on the back of a Harley with no gear on except for assless chaps with pink tassles and a pink bandana. Im really not a fan of Sturgis, haha. 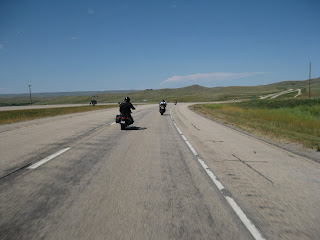 Got into Billings at 4pm and kept riding though. Got off the interstate at Laurel and gassed up. Lots of strange looks my way here, haha. Then on the way into Red Lodge, I could see a massive storm coming my way. Dark clouds, rain, lightning, the whole nine. Great. I rode 16A in the rain and I didn’t want to ride Beartooth Highway in the rain. It was rated the #1 road in America by the AMA so I wanted to enjoy this. I decided I would get a room tonight so I could charge up the cameras for the venture into Yellowstone tomorrow and then Glacier National Park the next day. 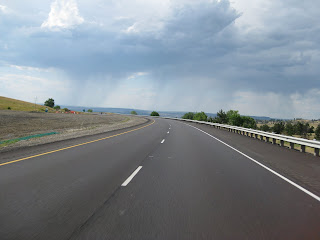 All things considering, Ive been pretty lucky with the rain thus far. 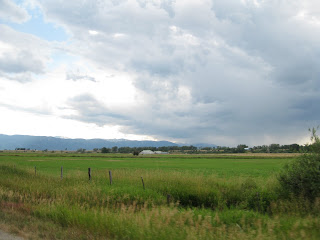 In Red Lodge, I pulled off at the first hotel I saw. The Alpine Lodge. There was a harley and it rider in the parking lot so I asked how much a room was. “90”, he said. Holy crap, that’s expensive. We chatted for a second, he made a comment on my ADV sticker which is the first one Ive gotten so that was pretty cool. I called around a few more places and it turns out 90 is the best it gets. The rider mentioned that they have tent sites here too but I didn’t want to camp in the rain again. We chatted for a bit longer, this guy is actually pretty cool, for a Harley guy, hahaha. I decided to try my luck at this hotel and as I was walking off, the Harley asked if I was going to get dinner and I said, yes. He then said to come by and get him before I left and he would join me. Cool! I wont be eating alone for once! Just as I was walking towards the office, a pack of Harleys came in and got to the office before I could. Shit, there better be more rooms available. There was one left after they got done. it’s a two bed cabin with no AC, no bathroom. But it was $88 after taxes which is pretty good for the area. All the other cabins and rooms were minimum $110 after taxes.

Unpacked and showered, I rode the bike to the Harley rider I met. I introduced myself and so did he. Brad is from Washington and has been on the road for two weeks. He took a lot of backroads out to Sturgis and was on his way back home via more backroads. I asked the people at the office for a recommendation then off we went. It was a nice little pub with 20 beers on tap. We both coincidentally ordered the Pigs Ass. Brad was at the chalkboard with the beer list when he ordered and I was at the table. We laughed about how we both picked it for its name. Turned out to be a great dark beer. I decided to get a Buffalo Burger since Ive never had one before and it I was to order one anywhere, then it would be Montana. 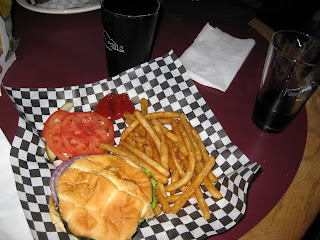 
As I talked to Brad more and more at dinner, he was really making me jealous. He is a pilot, which is what I wanted to be, he lived in Europe for quite a few years which I want to do, has ridden the Autobahn, the Italian alps, seen the Isle of Man……the list goes on. I hate this guy, he has done a lot things I desperately want to. And on top of it all, he just bought a KLR which is my next bike. As much as I was jealous of the things Ive done, I couldn’t help but like the guy, even though he rode a Harley, haha. But to be fair, he had sport bikes for some time too.


I don’t hate all Harley riders, but a lot of them really annoy me. Im sure a lot of sport bike guys annoy the Harley riders too. I wish we could all get along, but the world isn’t perfect.

Brad was generous enough to pay for dinner and I left the tip. I asked what the damage was and I tried to count the tip in my head. The two beers really had an effect on me and I was having trouble with the math. I laughed and started to make a remark about how bad it was that I was asian and couldn’t do simple math when he started laughing and said something like, “I wasn’t going to bring up stereotypes but it is pretty bad considering your Asian and a race car engineer.” I got a good laugh out of that one. Ive gotten awful at simple math lately, I do everything on a calculator now so my brain is completely defunct of simple mathematical equations. I cant imagine doing any calculus now. Brad gave me his contact info and offered me a place when Im in southern Washington. Ill be sure to take him up on it, maybe I can convince him to come ride a day with me near Mt. Hood and camp. 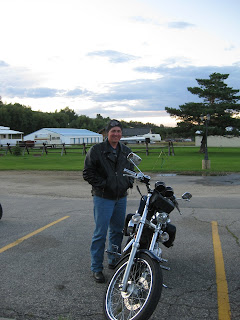 Brad and his Sportster.


Back at the hotel now and Im trying to update the blog. Its slow going but Im getting there. Im only a few days behind now and I should be able to update everything else once I get into Seattle. In just a few days, Ill be on the West Coast and be able to wish my brother a happy birthday in person for the first time in almost ten years. Im excited……