Got up early today so I could break camp and have breakfast quickly so I could try to get some cell service. Had a nice breakfast and was breaking camp when a blue Bandit 1200 shows up and then the rider waves to me. Ah, there’s Clint. Apparently he rode by a few times yesterday and didn’t think I would be camped at the resort so kept moving and stayed in town. Glad to see he was okay. We hung out for a bit while I packed up and then we hit the road. I’m headed to Kentucky today and asked Clint if he wanted to come along. “Sure,” he says, “as long as I’m back by Friday night so I can leave with the rig Saturday morning for the drive to California. Cool, no problem, I was headed to Roanoke, VA the next day so it should be possible. 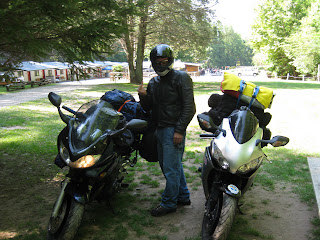 Clint giving me the salute.


We ride the Dragon out toward TN so we can hit 68 to Kentucky. Once on 68, I realize that we are not far from Cherohala and we could have taken that direction. Clint hasn’t ridden it before so we turned around. Cherohala is a great ride so I figured it would be worth the backtrack. I let Clint lead so he could pull off whenever he wanted to take pictures. I’ve been on the Skyway a million times so no pictures from me. Randomly, he pulls off and as we are checking out the overlook, a gentleman on a BMW asks if any of us have a tire repair kit. I always carry plug kits and compressor when I ride so I offered mine up. He has his own plug, but needed a compressor so after he plugged it, he rolled the bike next to mine and I filled up his tire for him. They also had a HJC helmet that needed to be fixed too. The visor wouldn’t clip on one side. Clint took care of that while I hooked the compressor up. I have carried my compressor for a few years now and have never had to use it for myself but have plugged countless number of other peoples tires on bikes, cars, trucks, trailers, whatever is round, rubber and needs to hold air. I believe in Karma and as long as I help other people, I hope that I wont have to use it for myself. The guys thanked us for fixing both their problems and took off. Clint and I rode almost to the end of the Skyway and turned around to get lunch. 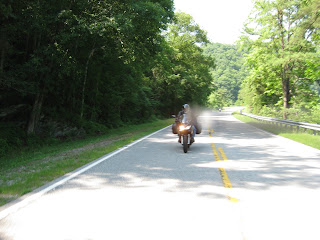 Shot of Clint on the Dragon after it mellows out. 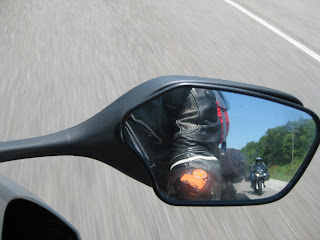 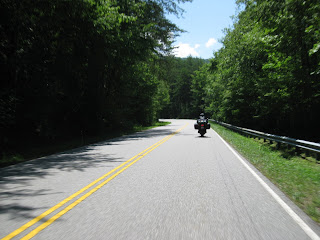 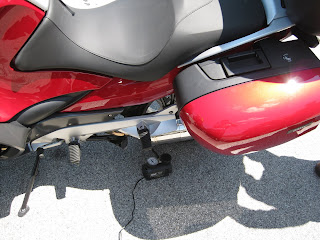 Helping out a fellow rider. 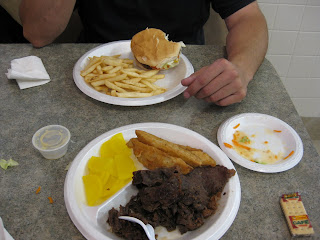 Lunch on Cherohala Skyway. Homemade Korean BBQ from a gas station, not great, should have known better but was too excited to care.

Lunch was at the Chevron station on the skyway near Tellico. This is my usual lunch spot when I ride the Skyway. A friend Ben, who we called Lightswitch because of his riding style, says they have the best chicken in the world. Not sure about that, but its pretty good. Apparently, they are now serving homemade Korean BBQ, so of course I chose that. However, it just wasn’t as good as it should have been. After lunch we went by the Tellico Outfitters(Can’t remember if that was the exact name or not, someone help me out here). I heard ADV stickers were available there so I wanted to purchase one and Clint wanted to get a throttle rocker. We talked with the owner for a while, he had just come back from an Alaska trip on the bike and apparently it was just miserable, rained the entire way. I’m hoping the weather is just a little better when I go.

Running behind now, we shoot straight up 68 towards Kentucky. The ride was straight and boring so I tried to find some other backroads on the fly. Not a whole lot better, but at least it wasn’t a 4 lane. I had planned to arrive at Cumberland Falls early and ride some of the backroads in the area but we started to set up camp around 7:30 or so and Bsed until 8:30. Then it was decided that adult beverages were needed. Unfortunately it was a dry county so we had to ride back into TN. No worries, only 25 miles or so. Clint unloaded a few things out of his Givi and we took off hoping to make it back before dark. Literally not 50 feet past the TN line, there was a gas station that sold alcohol. The sign out front was hilarious. We pick up a 6 pack and ride back. We arrived as the sun was setting and went straight to the waterfall to check it out before it got too dark. Cumberland Falls is known for the “Moonbow.” On a full moon night, a rainbow is created by the moonlight and mist from the falls. The pictures of it looks pretty cool, apparently it’s the only place in the Western Hemisphere that it happens. It wasn’t a full moon night, but still a neat waterfall. The rest of the night, we just traded riding and camping stories and then hit the sleeping bags at midnight. It’s gonna be a long day tomorrow so we better get rested up. 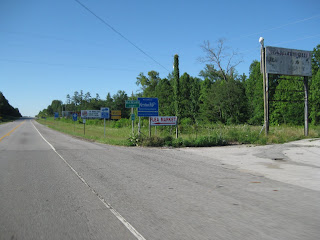 Somewhere in there is the Welcome to Kentucky sign. 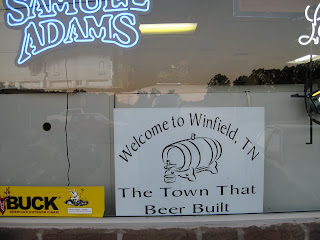 This store was literally 50 feet across the state line. The county in KY was a dry county but not Winfield, TN!
Posted by Dazn at 6:31 PM