My phone died in the middle of the night so when I woke up, I climbed out of the tent to check the time on the bike. It was a little foggy this morning and kind of chilly since I wasn’t dressed. I was only 15 minutes behind and I went to wake up Clint but he was already out of his tent. We packed up and agreed on a coffee and breakfast. We went to the Riverview Restaurant in the park and had a nice breakfast overlooking Cumberland River. I did have a picture on the phone....but more on that later. After breakfast, we went to see the falls in the daytime. The water was muddy from all the recent rain, but still a decent sized waterfall. 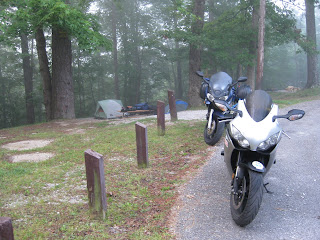 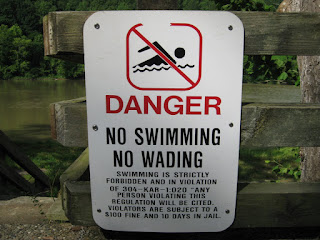 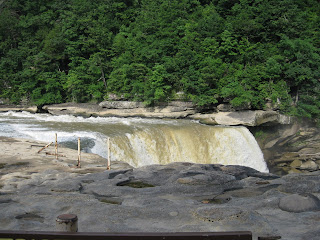 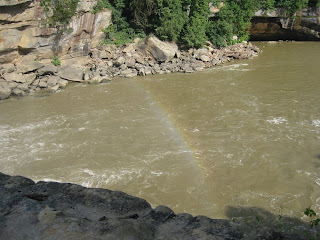 No Moonbow but got a rainbow instead. 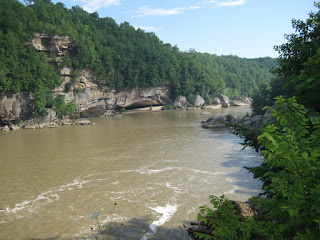 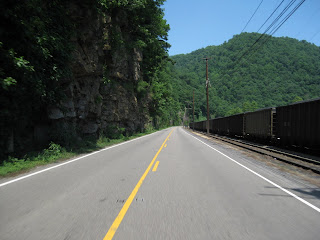 
It was already past 10am and we had a long long way to go so we hit the road heading towards West Virginia. I had randomly picked out some twisty backroads but since we were behind, I axed a few and just chose one longer road, KY 119. It was flat and straight for a long time with numerous people selling random things on the side of the road. Apparently it’s a Kentucky thing. After an hour or two, KY 119 started climbing up a mountain. Then it turned into a really great road. It was surprisingly twisty for a road that 18 wheelers used frequently. I wished I had some pictures, but my camera got packed away when I left camp this morning. We took some more random backroads, some where okay, some where pretty much just roads going through neighborhoods. One was a really tight twisty road through a neighborhood that opened up into a blasting area. It looked like they were building an interstate bridge there, hard to tell since not much was there yet. 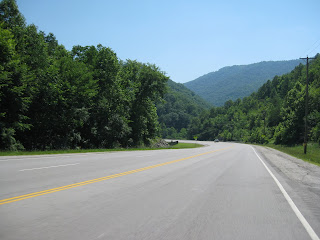 After several hours of riding through Kentucky, we re-evaluated our route and decided that we better cut some of it off if Clint was to make it back to Raleigh in a decent hour. At this point, he was to arrive after 9pm and that’s before stops, traffic or me making wrong turns(sometimes on purpose if I see something twisty or interesting on the GPS). We would cross into West Virginia for a while, but not into Welch like I had originally intended. No worries, I can do it tomorrow. I wanted to ride down to Meadows of Dan with Clint since I dragged him all the way through Kentucky, haha. There are quite a few places to camp along Meadows of Dan so I figured I would just set up as soon as we split. To make up even more time, we hit the interstate for half an hour to skip a backroad through town. We end up going down I-77 through one of my favorite tunnels. 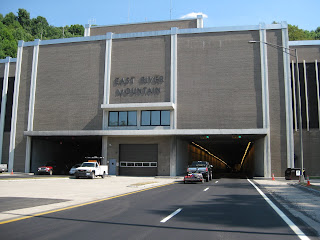 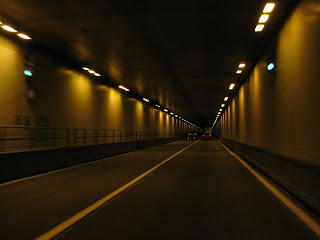 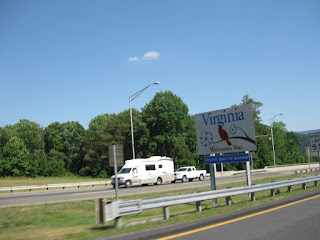 We got off I-77 at VA 58 towards Martinsville and went towards the Blue Ridge Parkway. There is a overlook called Lover’s Leap near the BRP on 58 and we stopped there for a sec and that’s where Clint and I split. I was headed back into Meadows of Dan to camp somewhere and Clint had at least 3 more hours of riding until he was in Raleigh. I think he got in around 10pm. Not too bad. Thanks for riding with me a few days Clint, it was a blast, next time we gotta plan a longer trip together. 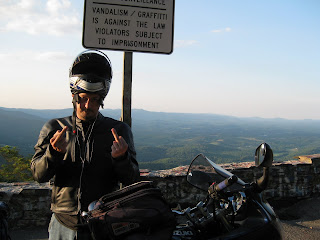 Clint took me to Lover's Leap. Glad we had separate tents, haha.

Back in Meadows of Dan, I stopped at a gas station to fill up. It was a full on country general store too so I picked up a green apple, nectarine and got a 6 inch sub and hot dog for dinner. There was a bluegrass/folk band playing outside so I ate outside and listened. Now it was time to find a campground, I plugged campground into the GPS and it pulls up Meadows of Dan campground so I call them up. $22, eh, a little high but its getting dark and it was just down the street. I head out, but miss my turn. Then I find a gravel drive to turn around in and I noticed the sign for Willville Bike Camp and a Bikes Only sign. Even better. I roll in and the host greets me, made a comment about how he had never seen that much stuff on a CBR before. $15 bucks for a site and it was self check-in and I could wait until I set up since it was getting dark. Cool. I like this place already. I drive on through to the sites and have a look around. It was sweet seeing so many other bikers camping. Some had minimal equipment like me, some came on full dressed Harleys and goldwings with trailers. I find a spot in the back near the creek(I like camping by creeks and water, can you tell?) and start unloading. 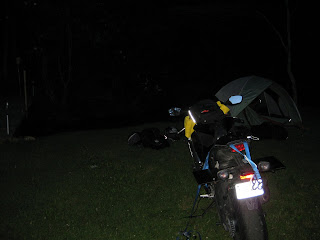 Setting up at night in Willville Motorcycle Camp

The two guys next to me are on BMW 650s and are younger than the rest of the crowd around here. We say hi and I keep unloading and start setting up the tent. They come over and are surprised like everyone else the amount of crap I pile onto the bike. We end up talking for a bit about riding and all that good stuff. Rob has been riding for a while and Taylor was 2,000 miles into his first bike and loving it. They grew up together as kids and live in different states now and kind of met in the middle to go ride together. Rob’s a Volvo mechanic and had some hilarious stories about his boss with a lifted Volvo station wagon with some interesting modifications. Taylor is finishing up his Ph. D(?) and bought his BMW brand new and had already put 2,000 miles on it. He had ridden a small bike in Thailand when he visited and fell in love with motorcycles. These two guys had me cracking up all night. They wanted to cook but the campground didn’t allow fires and there was only a communal fire ring that was already in use so I lent them my little stove and they had dinner and we had a couple of drinks together. It was a really fun night, awesome to meet some people closer to my age that were riding and camping. They had a few recommendations for me as far as riding and camping out west so I took some mental notes and shared a few of my favorite roads in our immediate area. We went to bed around midnight and when I went to set my alarm on my phone, I noticed the screen was cracked rendering the phone pretty much useless. Crap, already? I figured it would last longer than that. Oh well, Ill have to get a new phone in the morning….. 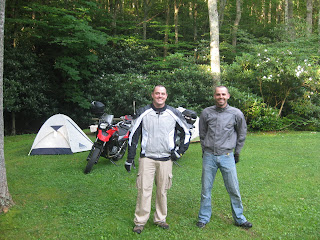 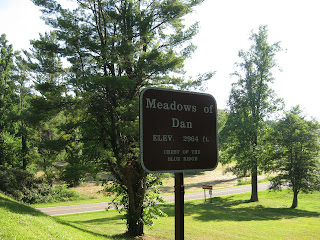