I’m behind once again. As I’m writing this, Im in Buffalo, NY at my cousin Christina’s place near University of Buffalo stuffed with buffalo wings.

It feels like weeks ago now that I’ve left New Hampshire which I’m quite happy about. I didn’t enjoy my time there quite as much as I hoped. Not sure if it was because I was on such a high from Maine that was difficult to beat or if New Hampshire was just not that great.

I had a hard time getting out of bed this morning, the campers behind me had a party going until pretty late into the night. Quiet time in the campgrounds is 10pm, at 12:30am, Im still sitting up in my tent frustrated because I was tired but couldn’t fall asleep because of the noise. They were obviously very inebriated and were shouting random things all night. Normally, I’m all about having a good time and I would never complain, but I can hear them shouting and the women cackling like a hyena though my earplugs. I had enough. I feel like an old man, these campers were well into their 60s. Im being out partied by old people. I had to call up the campgrounds and have them send security over to break up the party. I tried a few times myself, but it only induced more shouting and then the vulgarities started. Lots of ridiculous things were yelled out that I can’t even repeat on here. Finally the party ended and I fell asleep.

All packed up and ready to go, I decided I wanted to swing by the loud campers area and take a look at what was going on. No one was there, but there were plenty of beer cans and liquor bottles laying around. Must have been a good time.

Backroads are usually my route of choice, but going through New Hampshire on backroads was rough. Most of this area seems to be ski resorts that turn into lake resorts during the summer so traffic was insane and the small towns never seemed to end. It was one right after another and I was getting sick of tourist traffic in rental cars that couldn’t seem to look both ways before they pulled out onto the street. Would it kill you to look ways before you pull out? Because its going to kill me….. 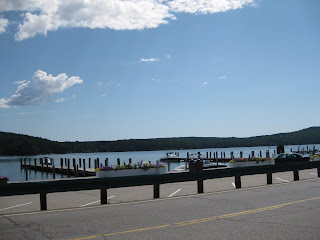 Almost in Vermont, I pulled off at a 50s style drive thru restaurant and had lunch. They were really slow and overstaffed so the waitress sat down and hung out with me. It was nice to have a little bit of company. I had the fish and chips which wasn’t so good, but it was food. Crossing into Vermont was like going into a different country for me. All of a sudden, the small towns disappeared and it was just me and the twisty roads. It was one after another and made up for all the time I spent feathering the clutch with eagle eyes on drivers’ hands, eyes and the front wheels of the numerous KIA and Hyundai rentals. It was such a relief to really ride again. 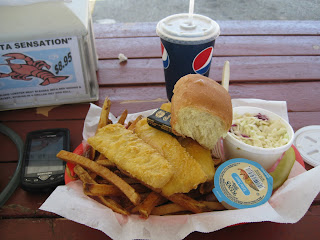 
My mood changed with the state border crossing. All of a sudden, I was happy to be on the bike again. Smooth sailing from here. The goal was to end up in the Adirondacks of NY today, so I wasn’t in Vermont too long but the parts that I did ride through I enjoyed. To cross into NY, I had to take a ferry across Lake Champlain. it’s the first time Ive been on a ferry with Jess so I was excited. Its only a very short ferry ride since we were at the southern end of the lake where it gets thin, but still cool. 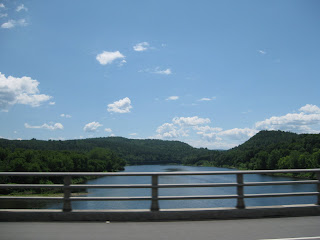 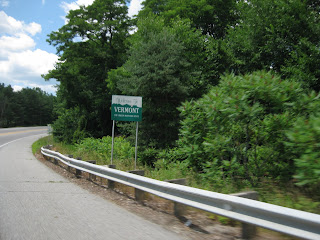 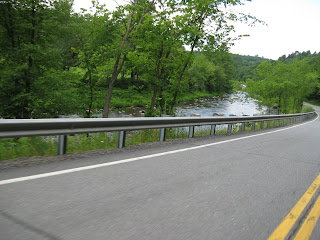 Vermont.
I only saw one sportbike while I was here and it had an ridiculous extended swingarm and tons of chrome. that guy doesnt know what he's missing. 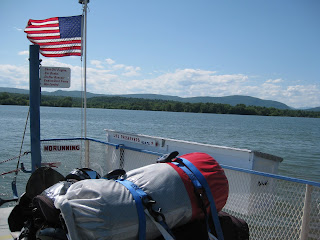 Ferry crossing. Back into NY! 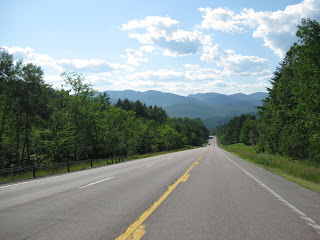 
Back into NY. I’ve been looking forward to the Adirondacks for quite some time now. I wasn’t sure where to go first, but a Harley rider on the ferry gave me a few tips. He told me the road to Lake Placid was fun but pretty much anywhere in the area were good riding. Yes, that’s exactly what I wanted to hear. I got on 74 heading towards 9 because I heard there were a lot of campgrounds in the area. I wanted to drop off the bags and have some fun. But the only campgrounds I saw were state parks and NY likes to charge out of state campers an extra $10 and plus a service fee so it usually adds up to over $30 sometimes $40. I turned back and decided to try my luck at Lake Placid. There has to be some private camping around here somewhere. 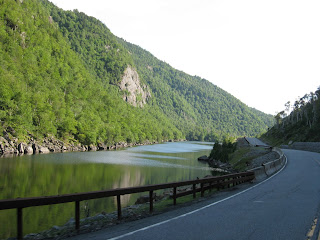 Heading up the mountain to Lake Placid

Just by sheer luck, I ran into one of the best roads Ive ridden in a long time. I cant remember the name of the road and cant seem to find it on my map now but I want to say it was called Tracy’s Road, county route 7 maybe. Anyways, no traffic and perfect condition with great curves. In fact, when I got to the end, I turned around and rode back the other direction so I could do it again.

After I had my fun, I carved my way up to Lake Placid to see the old Olympics center. The guy on the ferry told me that they still do bobsled runs and the ski jumpers were starting to practice. The scenery on the way to the lake was awesome. Some of it looked like what you would see in the foothills of the Southwest Rockies. On the way to Lake Placid on 28, I spot the Olympic center where the bob sled runs are held so I ride in to check it out. Its already closed at this point so I just walk up to the ticket counter to check out a price. $70. Ouch. Alright, guess I gotta eat cheap for a while. I always wondered about this sport, it looks pretty intense on TV so I wanted to get a run down the track pretty bad. 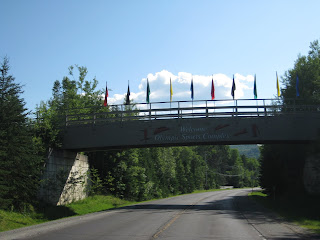 
It was time to start looking for a place to camp and I spotted Whispering Pines across the road from the Olympic Center. It was only $25 with no fees tacked on so I took it. Went to my site and dropped off a few things so I could fit groceries and maybe firewood. Wood isn’t cheap around here so I was hoping to find someone selling it on the side of the road for $3 or $4 but never found any. I did get to a Radioshack to buy new lithium batteries for my SPOT. Good god are they expensive. $20 for a 4 pack. Went next door to the grocery store and picked up a 4 pack of thin pork chops and potato salad and a couple of bananas for under $5.

Back at the site, I threw up the tent and fired up the stove. Cooked my pork chops, cleaned up and laid down on the picnic table to read. The two spots on either side of me were empty when I got there, but soon families pulled up. They were both young families with a small child each. The young girl to my right, maybe 6 or 7 years old got curious and came over to look at my bike while her parents unpacked and set up. We talked for a second and I could see she was eyeing the bananas so I gave her one. Then she got bored and went back to her parents while chomping down on the banana. Then I heard her mom ask her where she got the banana. The young girl pointed at me and I waved to her parents and said Hi and told them I had a few more if they wanted some. Her mom said no, they were just about to go eat dinner. Then I heard her admonish the young girl for ruining her dinner. Hehe, I laughed to myself silently. 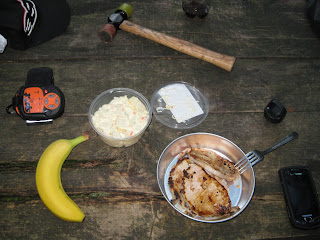 Porkchops, potato salad and bananas for $5. Cheap and tasty! I love my cooking gear. 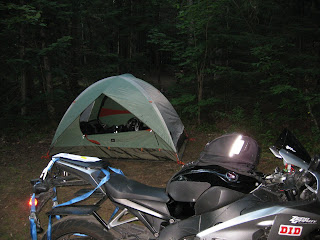 Whispering Pines.
Rough roads on a sportbike to get to the site, but nothing the CBR couldn't handle.

After a few chapters, I crawled into my bag and called it a night. It was only 9:30 but I was tired and was ready for some good sleep. It was getting chilly too which makes for a nice night in the tent and sleeping bag.
Posted by Dazn at 8:05 PM