Peter usually leaves for work by 7:30 so I get up at 7 so I can head out with him. He wanted to swing by his parents place again so he can load up the bike to take to work and ride on track. I’m jealous. After loading up his bike, I thank him for his generosity and take off to the nearest gas station to fill up the bike and get caffeinated. Erik had mentioned Cape Cod and Plymouth Rock yesterday and I hadn’t thought of it before so I figured it would be worth a look. I ride back through CT taking some nice twisty backroads and on one road, I saw two black bears in someone’s yard next to the street. I slow down and they run back towards the house. I’m not sure I would want to live so close to bears. 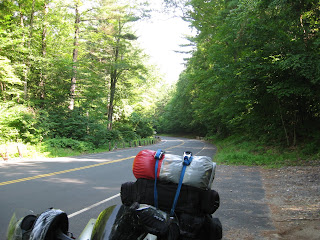 This is where I saw the two bears.
Lions, tigers and bears, oh my! 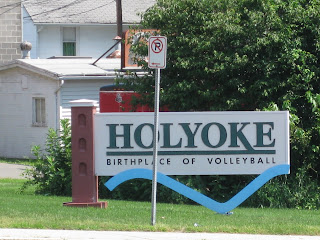 Not exactly the coolest thing to be known for, but I guess its something.


Today was going to be a really long ride especially with the detour to see Plymouth Rock. I was supposed to end the day in the White Mountains of New Hampshire but I would be there really late with the detour so I jumped on the interstate for a while to make up some time. The interstate took me up into Massachusetts and after a while, I realized I would completely miss Rhode Island if I continued this route so I got off and hit some backroads going south so I could ride through RI. There were a couple of rivers and a reservoir that I thought might be interesting so it was plugged into the GPS. When I got there I was pretty disappointed. It really wasn’t much of anything. Oh well, I didn’t expect too much from Rhode Island anyways so I just got the picture of the Welcome to RI sign that I had to backtrack for and kept moving along. I arrive at Plymouth rock around 2pm and the town is a total tourist trap. Traffic like you wouldn’t believe. I went to the monument dedicated to the forefathers and got a picture, it wasn’t really anything. In fact the park was empty and the small road wrapping around the monument wasn’t paved and had huge holes everywhere. I lapped it once and went to see Plymouth Rock, or lack thereof. There isn’t really a rock there, just a small monument and some gift shops. I spent maybe 5 minutes in the area and took off north. I wanted to ride out to the end of Cape Cod but it was just too far and too slow moving. 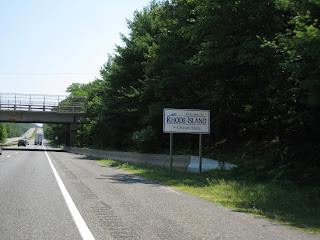 Welcome to Rhode not really an Island 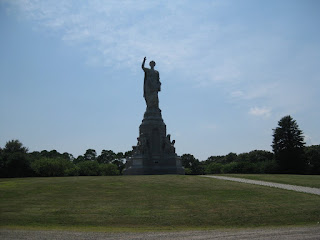 Monument dedicated to the Forefathers 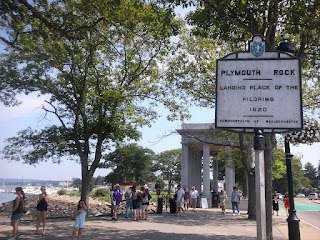 Still way behind on time I decided to jump back on the interstate to get through all the towns to reach Boston. I was quite impressed with Boston. Ive never been before and enjoyed seeing the buildings and bridges. The roads were terrible however so I spent a lot of time standing on the pegs so my ass wouldn’t absorb all the bumps and potholes. I keep my point and shoot camera in an open front compartment of my tank bag so I can pull it out quickly to snap pictures. After Boston, I look down to pull it out and I notice its not there anymore. Shit. I bet it flew out going over some of those massive bumps. This sucks, I had over 3 gigs of pictures on it and I hadn’t uploaded anything onto the laptop the past few days so a lot of pictures were lost. I was starting to get depressed about losing the camera while rolling through traffic. Just for shits and giggles, I feel around the front of the tank bag for the camera and stand up on the pegs to take a look when I see the camera lodged between the frame and front forks. Holy Crap!!! If I had made even the slightest of right turns the camera would have fallen down. it’s a good thing Ive been stuck in traffic. I carefully reach down and pull the camera out of its precarious resting position and stuff it back into the tank bag. I laugh inside my helmet and think about how lucky I am sometimes. 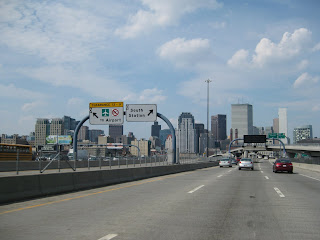 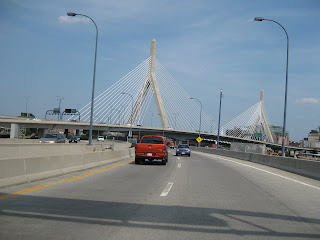 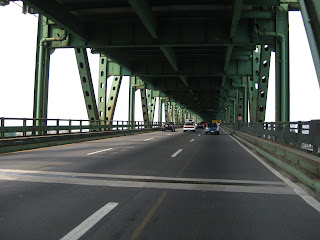 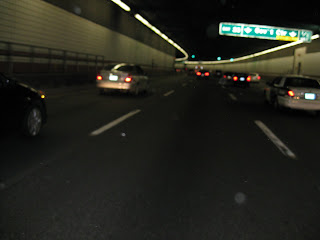 I heart tunnels too.

I hopped off the interstate after a while because Im just plain sick of it and take US1 to cross into New Hampshire. Im riding through a bunch of small beach towns so I pull off at a Thai and sushi restaurant for a late lunch. Its been a long day so I figured I would treat myself to the first nice meal Ive had since I started the trip. Salmon Maki roll, Pad Thai and a Sam Adams. Back on the road again, US1 crosses over a bridge through a small town. When I get to the bridge, its closed. Great, thanks for the warning signs…I start looking for ways to cross the river but I would have to backtrack quite a ways. Making my way back through the small town, some idiot tries to merge into my lane. it’s a good thing I was watching her in the car. I knew she was going to do it, she didn’t even bother looking in her mirrors. I move to the side of the lane and honk but she kept coming. I hold the horn button down for quite a while and then rev the motor up and finally get her attention. She realizes what she’s doing and swerves back into her lane but overreacts and clips a parked car. Should I stop? Hell no, fuck her. That what she gets for not paying attention, she could have easily ran me over. At this point, Im pissed off, tired and confused as to what road I should be on to get into New Hampshire. Apparently the GPS is confused too because it wants to take me around in circles so I just wing it and finally cross into NH. 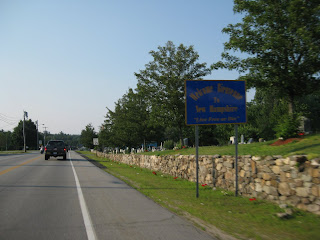 Once I get into New Hampshire, I pull over to fill up and rest. Its almost 6pm at this point and my destination was still a few hours away. I would make it there after dark. I better just stop early and find a place to camp. A few toll roads later, I had enough and got off to find a gas station so I could start looking for campgrounds. Finding a gas station was easier said than done. The sign at the exit showed an Irving station right off the exit so I went towards the direction the arrow pointed. Nope, not there. Okay, turn around and go the other way. Nope not there either. What the hell? Alright, Ill just get back on the main toll road and go up a few more exits. Same deal there, sign for a gas station off the exit but nowhere to be found. I ride around for about 20 minutes before I finally see one. At some point I had crossed into Maine without even realizing it. I found a campground for $25 near Indian River and head that direction. There was a 5 mile gravel road I had to travel down to get to the site that was bumpy and muddy. Fun stuff. I check in, pay a couple extra bucks for a site with electricity. I take full advantage and charge everything I carry. Someone had left some random pieces of wood at the site so I start a fire to help ward off the bugs. There were a lot of massive beetles flying around and quite a few of them ended up in the fire. I went up to the shower to get cleaned up and when I walk in, there were dozens of these huge beetles on the ground. I went to start killing them when I realized they were all on their backs with their legs scratching the air. Laughing to myself, I went in a stall and got ready to shower. I turn the water on and nothing comes out. Huh. Then I see a sign that says it’s a coin pay shower. Ive never seen one of these before, I guess I gotta go back and get some quarters.

All cleaned up and fresh, I go back to the tent and tend to the fire while catching up on the blog. No internet again so I’ll just put it all down on the laptop and upload them later. I’m several days behind again so at some point I need to find some internet. Tomorrow is supposed to be a short day so I stay up until 1am and planned to sleep in. I turned off the alarm clock and hit the sack. It didn’t take long to fall asleep. 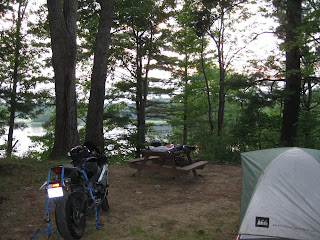